The Arizona Diamondbacks offensive funk continued on Sunday in Denver as they could only muster two-runs, on three-hits in a 5-2 defeat against the Colorado Rockies. Arizona has lost two straight and four of their last five-games. A lengthy rain delay held up, but could not prevent, an Arizona defeat.

Colorado’s Tyler Chatwood surrendered one earned run, on two hits and struck out five. The Diamondbacks have scored two-runs in their last 15-innings.  Arizona’s inability to generate any substantial offensive production cost starting pitcher Taijuan Walker a possible win. Walker had another solid effort after surrendering three runs in 5.2 innings, with only one run being earned.

As that suggests, he was not helped by his defense, as mistakes by Daniel Descalso and David Peralta contributed heavily to the Rockies three-run sixth. Descalso booted a ground-ball which should have been the third out of the frame. Peralta then fell over in right field and, although he got back up in time, then lost the ball in the sun, allowing it to fall beside him. [Pro-tip: sunglasses work better when they're on your face, not propped stylishly on the top of your cap, David]

The Diamondbacks' Jake Lamb broke out somewhat of a recent slump, he had struck out in five straight at bats, but singled in the top of the fourth and also drew a walk. Descalso and Chris Hermann each scored a run for Arizona, as they ended the shutout in the eighth inning; Hermann had a pair of walks on the day.

Arizona's offensive offense has scored two runs or fewer in four out of their last five games, and managed only 18 in total over the six games of this road-trip. Not coincidentally the Diamondbacks lost all four games when they couldn't muster more than two runs in their recent scoring drought.

The Rockies’ offense was paced by Mark Reynolds, 2-3 with a homerun, and Pat Valaika hit a two-run homerun in a three run sixth. It was Valaika's first homerun of the season.

With the win the Rockies extend their lead in the National League West to to 2.5 games over the second place Diamondbacks. Arizona finished their six-game road trip 2-4 but the Diamondbacks are home for their next nine straight games.

Arizona has Monday to recoup from their Rocky Mountain low before starting a brief, two game series with the Detroit Tigers on Tuesday. The first pitch from Chase Field is scheduled for 6:40 p.m. (Pacific) 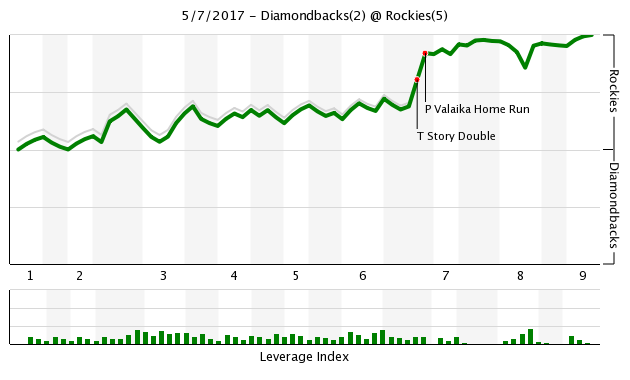 As noted, at least it's back to Arizona now for the D-backs, who will look to return to their home offensive form after an off-day tomorrow. Robbie Ray will take on Justin Verlander when the series against the Tigers begins on Tuesday night.