Arizona came out with guns blazing, scoring eight-runs in the first inning, and cruised thereafter.

The Arizona Diamondbacks came out hot and never looked back, against the San Diego Padres on Friday evening at Petco Park. The visiting Diamondbacks set a franchise record, scoring eight runs in the top of the first inning on their way to a 10-1 victory.

Things got going with one out there, when Jake Lamb blasted a three run home-run, his 10th of the season, scoring Gregor Blanco and Paul Goldschmidt. Two batters later, Brandon Drury hit a two run homer, his fourth of the season. And Arizona was not done scoring off San Diego starting pitcher Jered Weaver. For Diamondbacks pitcher Taijuan Walker hit an RBI single, scoring Chris Owings, to make it 6-0, and ending Weaver's night.

But not the first inning. David Peralta hit an RBI single that scored Walker and Lamb drove in his fourth run of the evening on a bases loaded walk to make it a 8-0 contest in the first. The D-backs sent 14 men to the plate, getting six hits and five walks, in a first inning that required 66 pitches and close to forty minutes of play. Weaver lasted ⅔ of an inning, faced nine batters and surrendered seven runs on five hits and two walks.

That basically ended the game as a meaningful contest, before San Diego even came to bat, but David Peralta and Lamb each added solo home-runs in the sixth inning to make it 10-0. Lamb had his first career multi homerun game, and  finished 2-5 with two homeruns and five RBI’s. The only Arizona starter without a hit was Goldschmidt, who walked twice in the first inning, and was lifted (purely for a rest) in the sixth inning. Owings got three hits, Drury and Peralta two apiece, and starting pitcher Taijuan Walker had two hits by the end of the second inning. It was that kind of night.

Speaking of Taijuan, Walker went six-innings, allowed just a pair of hits and no runs. He struck out three and walked three Padres. In line with the trend we've seen in May, it wasn't dominating, but was always likely to be good enough on a night where he batted before taking the mound.

Randall Delgado picked up a save for working the last three innings, though lost the shutout in the ninth, allowing a run on two hits and a walk with three strikeouts.. I think the previous high margin for a Diamondbacks' pitcher in a save, belongs to Mike Morgan, closing out an 11-3 win over the Phillies in April 2000.

With the win, Arizona improved to 25-18 and remain two games behind the National League West leading Colorado Rockies - they, the Dodgers and the Giants all won today.. The Diamondbacks have won four straight and seven of their last nine-games. The Padres, on the other hand, have lost four straight and are last in the major leagues with a 15-29 record. 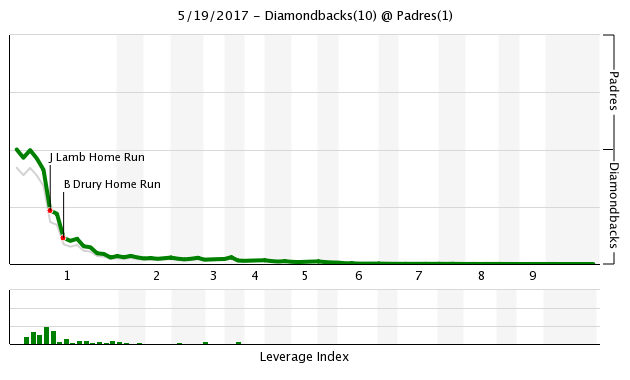 Comment of the night is a tie between Oldenschoole and hotclaws:

Hopefully, this series will NOT follow the pattern of the first time we were in San Diego. If you recall, the D-backs won a laugher in the opening game, by a nine-run margin... then scored a TOTAL of one run over the rest of the series. Fingers crossed the first inning was not the offense for San Diego...