Zack Godley was divine on Thursday evening in Phoenix. The recent minor league call up was dominant throughout the Arizona Diamondbacks 7 to 1 win over the visiting Detroit Tigers. Arizona split the two game series with Detroit and ended their three-game losing streak in the process.

Godley was making his second start of the season, and struck out three out of the first four batters he faced. He was starting in place of the injured Shelby Miller, who had season ending Tommy John Surgery on Wednesday.

At one point Godley set down 11 Tigers in a row. He finished the game with one earned run, six strikeouts and surrendered four-hits in seven-innings pitched for his first win of the season. He also rolled up a trio of double-plays, which helped keep his pitch count at a very manageable 88.

Tigers starting pitcher Matthew Boyd was strong in defeat with three earned runs and six strikeouts in six-innings of work.

After striking three straight Tigers, Godley gave up three consecutive singles to Justin Upton, Jim Adduci and James McCann, though Nick Ahmed could certainly have made a better effort on one of those hits.. McCann’s single drove in the former Diamondback Upton and gave Detroit the early 1-0 lead in the second inning.

The Diamondbacks’ Pollock broke open the contest with a two-run single in the sixth inning. Godley helped his own cause by drawing a walk, without taking the bat off his shoulder. That loaded the bases for Arizona with two outs, Ahmed having been given a no-pitch intentional walk in order to pitch to Godley.

Yasmany Tomas added a two-run homer in the seventh and Brandon Drury followed it immediately with a solo homerun of his own. It was their sixth and second home-runs of the season respectively. After Godley exited, Randall Delgado closed things out, striking out four batters over his two scoreless innings of one-hit ball. He has now thrown 8.1 innings since last allowing a run, allowing five hits in that time, with a K:BB of 11:2.

Arizona continues their nine-game homestand with a four game series against the Pittsburgh Pirates. The first game of the series is tomorrow night, with the first pitch scheduled for 6:40 p.m. (Pacific). The Diamondbacks’ Zack Greinke is expected to start on the mound against the Pirates' Gerrit Cole. 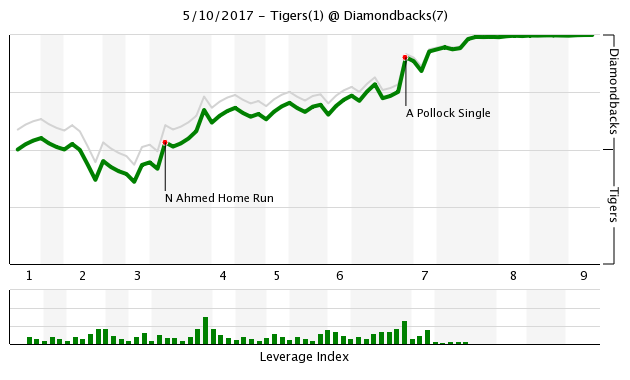 Well, I guess that settles it

No need for Fister.

Certainly, a very solid performance by Godley. His Game Score of 70 is one Zack has only surpassed once in his career - his major-league debut on July 23, 2015, when he blanked the Brewers for six innings. Hopefully, it's a sign of good things to come, and tonight's performance certainly makes it hard for him to be taken out for the next scheduled start. That would come against the Mets at Chase on Monday night. Tomorrow, as David mentioned, it's the Pirates who arrive for the first of a four-game set, with Greinke on the mound for Arizona.