Tonight's game was a duel between each teams 2nd best starter, Merrill Kelly for our DBacks vs Clayton Kershaw for the Dodgers. Started out with a clean first inning but the Dodgers got on the board with a 2-run Joey Gallo bomb in the 2nd and tacked on a couple more runs on a Freeman homer in the 3rd and a Muncy homer in the 7th. DBacks offense was quiet once again as the Dodgers have held them scoreless for 18 consecutive innings. We look to avoid the sweep tomorrow night at 6:40 Arizona Time.

Preface - I am currently on a business trip in Charlotte, NC. First ever business trip, really feeling like an adult now. But I did not take the whole time zone concept into consideration when signing up for this recap. Less adult like I suppose. 1st pitch is at 9:40 PM here so I apologize in advance for any mistakes made within this write up as I assume it will be around 12:15 AM when I finish.

First pitch from Merrill Kelly at the lovely hour of 9:40 PM Eastern Time. A groundout by Mookie Betts starts things out for the top half of the inning. Kelly walked Trea Turner but made quick work of Freddie Freeman and Will Smith with a 2 pitch flyout and a 3 pitch strike out to end the inning on 12 pitches.

Clayton Kershaw on the mound for the Dodgers facing Carson Kelly, getting a pop up to first on the first pitch. Ketel strikes out looking on a full count on a pitch that was at least 4 inches below his knees. Same pitch to McCarthy is called a ball. Hmm. Using that call, McCarthy works a walk but CWalk strikes out to end the inning.

Bad luck on a tapper back to the mound, deflected off Kelly's glove and bounced by Rivera at 3rd gives Muncy a base hit. With the help of another awful call by the umpire, Kelly strikes out Justin Turner on a full count. Joey Gallo, the true Strikeout or Home Run guy does the latter, and mashes a ball to the homerun porch in right center. 2-0 Dodgers Chris Taylor follows that up with a double into the left field corner to apparently recalled Jordan Luplow? I was on a plane most of yesterday so must have missed that news. Great. Bellinger fouls out to Rivera at 3rd, 2 outs. Lineup turns over and here is Betts again. Kelly walks Mookie which prompts a visit from Brent Strom and gives me a second to go get my Taco Bell order I Doordashed to my hotel room. While I was away, Kelly strikes out Turner to get out of the inning.

Kershaw makes quick work of the DBacks as Rivera strikes out, Garrett pops up to short, and Luplow grounds out to 3rd. Batting .160... are there no other options in the minors we could have brought up?? Canzone? Fletcher maybe?

Freeman starts the inning off with a dinger to right center. 3-0 Dodgers Kelly gets Smith to fly out to right, but walks Muncy, then strikes out Turner, but walks Gallo for his 2nd of the inning. He escapes any further damage with a strikeout of Chris Taylor.

Not much action once again for the DBacks, with a Varsho strike out, first hit for the DBacks, a single by Perdomo but is immediately erased on a fielders choice by Kelly, and a ground out by Marte closes out the 3rd. On to the 4th.

Kelly starts off the 4th strong, back to back strikeouts of Bellinger and Betts. A double by Turner forces an intentional walk to Freeman but a fly out by smith gets Merrill out of the inning.

Another 1-2-3 inning by the DBacks offense - McCarthy fly out, Walker strike out, and a groundout by Rivera on a diving stop by Turner

A fly out by Max Muncy, line out to short by Turner, and the three true outcome hero Joey Gallo has completed the trifecta. A home run, a walk, and a strikeout to finish the top half of the 5th.

That’ll be the end of Merrill’s day with Kyle Nelson warming up in the bullpen. Oh boy.

Stone Garrett leads it off with a mile high fly out to left, Luplow grounds out to short, and Varsho grounds out to 2nd for another 1-2-3 inning by Kershaw.

Well, it is not Kyle Nelson, it’s Taylor Widener who seems to have grown an odd mustache for this stint in the big leagues.

Chris Taylor greets him with a single up the middle.

But for some good news, I’ve now found out I can cast the game from my laptop to my hotel TV so I am able to get comfy for the remainder of what looks to be a very boring game.

Bellinger pops up to Carson behind the plate. Betts pops up to Walker. Turner lined out to short to end the inning.

Another 1-2-3 inning…shocker. Perdomo ground out, Kelly fly out, Marte groundout.

Freeman struck out, Smith grounded out, but with two outs, Max Muncy smacks a high fast ball over the right field wall to make it 4-0 Dodgers. Turner doubled but the further damage was avoided with a strikeout by Gallo.

Not a 1-2-3 Inning for the DBacks!! But still not much, a McCarthy fly out, Walker ground out, and a Garrett fly out with a single by Emmanuel Rivera sandwiched between finishes off the 7th.

Keynan Middleton on for the DBacks. Gets Taylor to ground out, Bellinger to strikeout, and Betts to foul out on a nice play by McCarthy

Finally Kershaw is out of the game with Caleb Ferguson on in relief.

Luplow leads off the inning with a walk, and now apparently something exciting is happening but I currently have the game on mute as I’m on the phone with my mother. Rewinding to see what actually happened. It appears the dodger fans were arguing the no call on the check swing against luplow and it got Dave Roberts ejected although it should have resulted in the annoying players in the dugout screaming about it getting ejected but hey, I’m cool with anybody wearing dodger blue getting thrown outta the game anytime.

Varsho follows up the luplow walk with a rocket single through the right side of the field. Perdomo strikes out for the first out of the inning. And in proper DBacks fashion, Carson Kelly grounds into an inning ending double play.

Melancon on to pitch the 9th. The lowest leverage situation possible for him. Just how I like it. He gets Turner to fly out and Freeman to strike out before giving up a single to Will Smith. A walk to Muncy. A walk to Turner loads the bases for big Joey Gallo. Gallo grounds out to Walker at first to end the inning.

2-3-4 up for the DBacks against Craig Kimbrel. This is their best chance to do anything. A hard line out to center by Marte for the first out of the inning. McCarthy grounds out to the pitcher. 2 down. CWalk is our last hope. But a line out to 2nd ends the game for the DBacks.

DBacks have now been held scoreless for 18 consecutive innings and fall to 2-11 against the enemies from The west. Apologies for the somewhat boring recap, T'was a boring game and it is 12:35 AM as the last out is made. Thank you Jim for the opportunity once again and hope to write for you all again next season! Maybe I’ll find something to write about during the off-season to put on here.

Here’s to a better 2023 season! DSmith signing off. Goodnight everybody!

Same two teams tomorrow night at 6:40. At least I'll get to watch it from the comfort of my own bed as I will be flying home tomorrow afternoon! 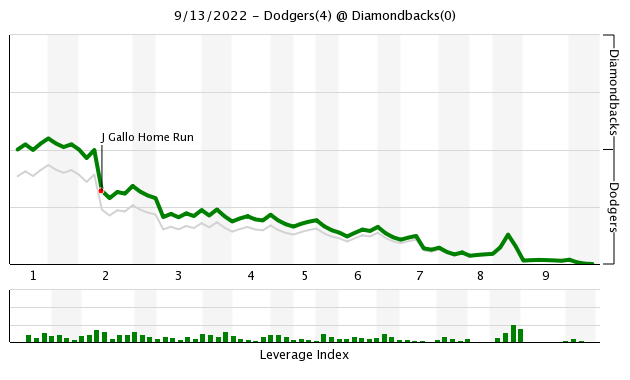 An understandably slow night in the GDT. The appeal of watching Los Angeles claim another division crown on our turf had absolutely no appeal to me whatsoever. To be honest, I may not be watching many D-backs games over the next two weeks. Comment of the night goes to Jack's uncredited repost from the D-backs subreddit... :) 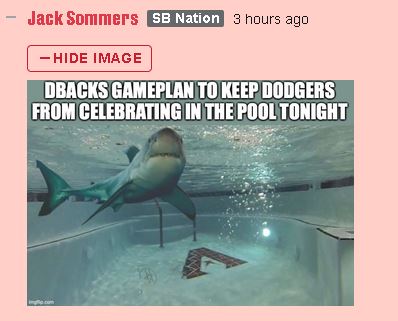 Back at it again tomorrow, with another 6:40 pm first pitch. Zach Davies will try and avoid the sweep, while the offense will try and score a run. Thanks to DSmith1218 for enduring this - especially from the East coast!