DBacks and Merrill Kelly were hoping to avoid the sweep against Jose Quintana and the Cardinals. Cards scored 3 off Merrill in the 1st but the DBacks fought back to hold a brief 4-3 lead. Unfortunately, even though Kelly settled down and threw scoreless baseball until the 6th, the offense went silent and the bullpen could not follow Merrill as they gave up 3 runs over the final 3 innings giving the Cardinals a 6 to 4 win today and a 3 game sweep over the DBacks at Chase Field.

Another return by our Old Friend Paul Goldschmidt to Chase Field where all he did was mash the baseball as he has been doing all season. And my first time watching my old friend, Nolan Gorman in the majors since he was called up after being drafted out of my school district in 2018.

Note - I got home during the bottom of the 2nd, reading through the play by play on the ESPN app for everything before that.

Cardinals started off with a bang with Lars Nootbaar hitting a solo shot into the right field bleachers to lead off the game against Merril Kelly. A couple singles by Donovan and Goldy set up an RBI single by old friend Nolan Arenado (Oh how I don’t miss playing him 20 times a season) and a run scoring double play by an old personal friend from my high school days, a Sandra Day O’Connor product, Nolan Gorman. Damage was finally done with a strike out of Tyler O’Neil.

A couple singles by Marte and Rivera had them in a position to score but the threat was ended quickly with an inning ending double play by Walker.

Kelly got a ground out by Dickerson, gave up a single to Paul DeJong but ended the inning with a double play by Knizner.

Before I walked in my front door, Stone Garrett continued his hot start with a single to center, followed by a walk for Rojas and a fly out by Luplow. McCarthy gets the DBacks on the board with a single to right center scoring Garrett. Now my TV is on and the first thing I see is Perdomo moving Rojas and McCarthy to 2nd and 3rd with a soft groundout. Carson Kelly drew a walk to load the bases for Rivera who hit a rocket ground ball to 3rd stopped on a dive by Brendan Donovan but he could not complete the play, throwing it away out of Goldy’s reach near the dugout scoring Rojas and McCarthy. Ketel Marte ends the inning with a soft flyout to left.

Top of the lineup for St. Louis, a missed call by home plate umpire C.B Bucknor on 2-2 results in Nootbaar drawing a walk instead of striking out. Unfortunate break for Merrill. Back to back walks by Kelly puts two on for Goldy. A first pitch pop out to Perdomo, phew. Bucknor’s always lovely strike zone has apparently exceeded Cardinals manager Oliver Marmol’s patience level as he is ejected after one word following an inside strike call to Arenado. Marmol came out to get his money’s worth, in a heated argument with Bucknor having to be separated by the crew chief. On the next pitch, Arenado hits a deep fly ball to left center, caught by McCarthy. Two down for Nolan Gorman. First pitch fly out to center, Kelly gets out of the jam.

Walker singles into left to lead off the home half of the 3rd. First swing by Stone Garrett hits catcher Andrew Knizner’s glove hand knocking off the mitt, sending Knizner to the ground in pain. Catcher’s Interference gives Garrett 1st base. Trainer and bench coach/interim manager for the game Skip Schumaker out there checking on him. Long time Cardinals catcher Yadier Molina is attending to personal matters down in Puerto Rico so they would be down to their rookie back-up if Knizner can’t stay in. Fortunately for St.Louis, Knizer appears to be alright. 2 on, no outs for Rojas who immediately hits into a double play. Luplow WITH AN RBI SINGLE!!! Speaking on behalf of DBacks fans everywhere I assume, stunning to say the least. Walker scores from 3rd and the DBacks take the lead 4-3! McCarthy walks which ends the day for Jose Quintana after only 3 ⅔ and 73 pitches. On to pitch for St. Louis is Chris Stratton to face Perdomo with 2 on and 2 outs. Groundout to 1st ends the inning.

Couple of groundouts by O’Neil and Dickerson and a soft line drive to 3rd by Dejong end an easy 11 pitch inning for Merrill.

Lineup flips over for the DBacks facing Chris Stratton still on the mound. A strikeout by Carson Kelly, fly outs by Rivera and Marte end a quiet 4th inning.

A strikeout by Knizner and a groundout by Nootbaar start off the 5th. A double down the left field line by Donovan sets up a RISP for Goldschmidt (who is batting .377 in these situations this season by the way.) Yet Kelly gets Goldy swinging with a fastball down the middle.

Ground out by Walker, fly out by Garrett, and ground out by Rojas end another quiet inning by both teams.

Kelly strikes out Arenado to lead off the 6th. Then walks Gorman after an 8 pitch at-bat. A strike out on what the Cardinals think is a controversial foul tip by O’Neil for the 2nd out. Corey Dickerson singles to left, moving Gorman up to 2nd, 2 on 2 out for Paul DeJong. After falling behind 3-0, Kelly strikes out DeJong to end the threat in the 6th. At 97 pitches, it looks to be the end of Merrill’s day.

Stratton still out there for St. Louis. A ground out by Luplow starts it off. McCarthy on base for the 3rd time today with a walk. Perdomo follows that up with a walk of his own which will end Stratton’s day ahead of Carson Kelly. Jake Woodford on for St. Louis gets a pop up to first by Carson. Rivera grounds out to first as the DBacks leave 2 on to end the inning.

Into pitch for the DBacks is Joe Mantiply who has looked more like his first half self lately. Knizner greets him with a single to center. A fielder’s choice by Nootbaar. Pujols is on to pinch hit for Donovan and he continues his incredible season with a single past shortstop. (I was about 6 months old when Albert Pujols made his MLB Debut.) That ends Mantiply’s day with Goldy coming up. Goldy gets immediately plunked by new pitcher for the DBacks Kevin Ginkel, loading the bases for Nolan Arenado. A dropped foul tip gives Arenado a 2nd chance in which he makes the most of, with a 2 run single to give the Cards the lead. 1st and 3rd with 1 out still for Gorman. Ginkel gets a big strike out by Gorman but Arenado steals 2nd. 2nd and 3rd, 2 down, for Tyler O’Neil. Ginkel escapes any further damage with a strikeout.

DBacks yet to get a hit since the 3rd inning and now trail by one. Marte leads off with a groundout. 1 for 4 so far in his return to the starting line up after the hamstring tweak. Christian Walker pops out. Stone Garrett continues to do Stone Garrett things and hits an absolute missile up the middle for a single. The king of 100 mph+ Exit Velocity. Cards go back to the bullpen, bringing in Genesis Cabrera to face Josh Rojas. Rojas lines to first. On to the 8th.

Noe Ramirez on for the Dbacks. Ramirez gets Corey Dickerson to ground out but then walks DeJong. Carson Kelly guns down DeJong trying to swipe 2nd for the 2nd out. A walk to Knizner puts another man on the bases ahead of leadoff man Nootbaar. Wild pitch allows Knizner to advance. Noe does not look sharp out there tonight, walking his 3rd consecutive batter. Tommy Edman, making his first plate appearance of the day after pinch running for Pujols, hits an RBI single on the first pitch he sees making it 6-4 Cardinals. Here comes Torey, 1 batter too late, bringing in just-called up Luis Frias to face Goldy with 2 on, 2 out. Goldy smacks a line drive to left-center but a beautiful sliding catch by Stone Garrett saves the day and gets the DBacks out of the inning.

Now down by 2 and the bottom of the order coming up, my hopes are diminishing quickly. Luplow leading off, pops out to Goldy. I understand the right on left match up there but is that really better than Varsho or Thomas regardless of handedness?? Anyway, McCarthy is up with 1 out, and grounds out to 2nd. Perdomo chops at the first pitch, popping up softly. To the 9th.

IPK on to protect a 2 run deficit since the rest of our bullpen could not protect a 1 run lead. Arenado leading off for the Cards, pops out to Rojas at 2nd. A strikeout by Gorman for a quick 2nd out, a single by O’Neil, and a flyout by late entry to the game, Dylan Carlson ends the Cards half of the 9th.

Our last chance to avoid the sweep begins with the top of the lineup, C. Kelly, Rivera, and Marte up against Cardinals "closer" Giovanny Gallegos. Varsho on to pinch hit for Carson, flys out to right. Rivera grounds out sharply to shortstop. Ketel Marte, our last chance, strikes out on 3 pitches.

Well, now off to watch our hometown Cardinals as they play their 2nd preseason game against the Baltimore Ravens. Thank you Jim for the opportunity again! Go AZ Cardinals and as always, Go DBacks!

Off day tomorrow, then it’s off to Kansas City to face off against the Royals for a quick 2 game set. Davies on the mound Tuesday and Gallen on the mound Wednesday. 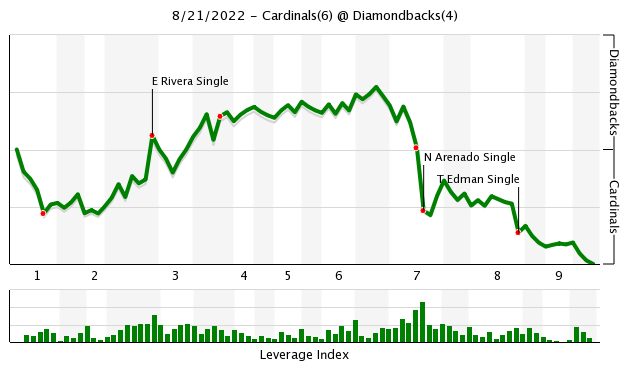