A gorgeous Sunday afternoon at beautiful Coors Field in Denver had its moments of gloominess also, not just in Tom Candiotti's predictions of an incoming storm, which luckily held off for the game...but in some sheer mishaps along the way of the game, & later on, an injury. We had outstanding pitching by Henry the 8th...aka Tommy Henry, until he ran out of gas...where the Rockies' Ryan Feltner didn't fare so well and took the loss as a result.

Early on, in the first inning, Emmanuel Rivers singled on a ground ball to left field. Christian Walker got the Dbacks on the board with a double fly ball to center field, which brought Rivera home, making the game 1-0 in favor of Arizona. The bottom of the first, the Rockies had opportunities but left two men, Randal Grichuk & C.J. Cron, on base, failing to get them home.

The top of the second, the highlight for the Dbacks was Jake McCarthy stealing 2nd base. The bottom of the second was uneventful for the Rockies.

Top of the third, it was Christian Walker once again with the heroics, as he hit a three-run shot to left center field, scoring Josh Rojas & Ketel Marte, as well as himself. Bottom of the third, Tommy Henry got the Rockies to line out, ground out, and fly out, consecutively.

Top of the fourth brought a single by Cooper Hummel, an advance to second base due to a throwing error by Brendan Rogers, and eventually scoring on a Jake McCarthy double. McCarthy also stole 3rd base in this inning. Bottom of the fourth, Tommy Henry got the Rockies to ground out, pop out, and strike out.

Top of the fifth, Ketel Marte flew out to left field. Christian Walker got a single on a line drive to left. Bud Black had enough and asked that Ryan Feltner be removed from the game, bringing Austin Gomber in to replace him. Gomber got the next three batters out to end the inning. Bottom of the fifth, Tommy Henry is still pitching. Ryan McMahon singles on a bunt ground ball to second. Garrett Hampson then grounds into a force out, resulting in McMahon being out, Hampson on first. Wynton Bernard strikes out swinging & Hampson steals second base. A passed ball by Cooper Hummel results in Hampson taking third base. Brian Serven walks. Connor Joe flies out to end the inning, stranding the runners on base.

Top of the sixth, Austin Gomber got Jake McCarthy to pop out to third, but then got himself in trouble, as he allowed a double to Geraldo Perdomo & a single to Josh Rojas, resulting in Perdomo scoring. By this time, the score is Arizona 7, Colorado 0. Gomber got out of the inning by means of Rivera striking out on a foul tip & Marte being called out on strikes.

Bottom of the sixth saw a substitution on the field: Jordan Luplow entered the game in right field for Daulton Varsho. Tommy Henry still there. He got Randal Grichuk to strike out by way of the swing., but then walked Brendan Rogers, allowed a single to C.J. Cron, a double to Elehuris Montero, & a single to Ryan McMahon, scoring Montero & Cron. Tommy's game was over, as he gets replaced by Tyler Holton. Hampson walked, McMahon to second. Rockies challenged a force play, which the umps upheld; Wynton Bernard grounded into a force out. Bases loaded, Brian Serven grounded out to end the inning & leave the bases loaded.

Top of the seventh is uneventful for Arizona, as Walker lined out to left field, Luplow popped out in foul territory, & Alek Thomas grounded out to short. Bottom of the seventh brought Chris Devenski to replace Tyler Holton. Devenski got Connor Joe out on strikes, allowed a single to Randal Grichuk, walked Brendan Rogers, Grichuk to second, a line out to right by C.J. Cron, & a fly out to center by Montero.

Top of the eighth brought Dinelson Lamet in to replace Austin Gomber. Lamet got ground outs by Hummel & McCarthy, & a line out by Perdomo to end the inning. Bottom of the eighth brought Carson Kelly in to replace Cooper Hummel behind the plate & Mark Melancon in to pitch, as he replaced Chris Devenski. Melancon found himself in trouble early, as he allowed a double to Ryan McMahon & a single to Garrett Hampson. He got Wynton Bernard to ground into a double play; McMahon scored & Hampson was out at second. Brian Serven popped out to short, which brought the inning to an end.

Top of the ninth, Lamet back out to pitch. He got Rojas to ground out, then got Rivera out on strikes. Ketel Marte got hit by a pitch. Walker doubled on a line drive to center field. Marte went to third but came up slowly. Game delayed as Marte is removed, due to injury (thinking a hamstring). Sergio Alcantara replaced Marte as a pinch-runner. Jordan Luplow popped out in foul territory.

Bottom of the ninth, Alacantara stayed in the game as the designated hitter. Ian Kennedy replaced Mark Melancon on the mound. IPK served a walk to his first hitter, Connor Joe. He got Randal Grichuk to fly out to center. Brendan Rogers reached on a fielder's choice. Joe advanced to second on a missed catch error by Perdomo. C.J. Cron lined out to right field. Elehuris Montero brought the game to a close as he is called out on strikes.

Now, I know we shouldn't make our own comment the COTG, but unfortunately, mine was the ONLY one that got a lot of recs and was turned red...so I'll let Jim handle the logistics of putting my comment in here, as well as all the bells and whistles...

For the record, I had a great time doing this recap for you all. The last time I did one, as I recall, was before COVID if I am not mistaken. I enjoy reading everyone's recaps as well as all the fun comments in our game threads. Thank you all for letting me take the reins today, but especially thanks to Jim & the Snakepit mods for letting me to do this. 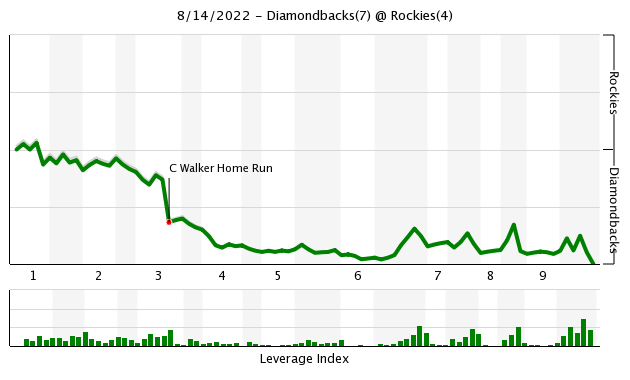 A cunning ploy by April. By deferring to me, she is no longer guilty of picking her own comment... Jack and Michael should be grateful, for otherwise, their unrelenting predictions of doom - equally unrelenting in their failure to occur - would have been selected by me. But I can't say this was other than very well-deserved.

Thanks to April for a sterling recap of a very entertaining game! On to San Francisco go the Diamondbacks, seeking a fourth series win in a row. Since this is a four-game set it'll be tough... First pitch tomorrow is at 6:45 pm Arizona time, with the starter for now the crafty veteran, Toby Decided.