As he is wont to do, Mark Melancon ruined a fantastic start from Merrill Kelly by coming into a tie game in the 9th and giving up a walk-off double to Austin Riley. The Dback offense was non-existent (outside of Jake McCarthy continuing his bid for replacing David Peralta in our hearts) except for putting 2 runners on in the 6th.

Greetings again from Texas, where there is no monsoon season, the shade doesn’t work to beat the heat, and a 12:35 PM local start time to today’s game is much better than being on Arizona time! Merrill Kelly on the mound vs. Max Fried gave me hope of a good pitchers duel and I wasn’t disappointed. Arizona’s all-time record of 16-5 on July 31st provided the only hope of a win, and I was disappointed.

Kelly really was pretty fantastic, with a final line of 7 IP, 3 H, 2 BB and 8 K’s on 91 pitches. The only time he ever got into trouble was in the 2nd inning after a leadoff double by Austin Riley and a 1-out BB to Travis d’Arnaud. However, one of the strangest double plays I’ve ever heard got him out of the inning. William Contreras hit a fly ball toward the left field corner, and after making the catch, Jake McCarthy crashed into the wall and the ball popped out. However, both Brave runners stayed put, and McCarthy was able to throw in to 3rd to force Riley, and then on to 2nd to force d’Arnaud.

On the opposing side, though, Max Fried was just as good, if not a little less efficient. It took until the 4th inning to get a baserunner courtesy of a Ketel Marte BB, and the 5th inning for Jake McCarthy to break up a no-hit bid for the 2nd game in a row. However, he received negative-Peralta points for a CS to end the inning.

Fried began to get a little sloppy in the 6th, with Daulton Varsho reaching via a walk and Perdomo bunting for a hit to get the top of the order up. They promptly went down in order with a Carson Kelly K, Josh Rojas line out to LF, and a Marte popup to Fried.

The 7th also started off promisingly with a Christian Walker leadoff single, but he was erased on a Buddy Kennedy GIDP. And that was all the offense wrote.

With Kelly out of the game, Ian Kennedy came in and pitched a clean 8th inning after an extended landscaping visit to the mound. Whatever the crew did worked for Kennedy, but must not have been to Mark Melancon’s liking. For, alas, in a tie game in the 9th (stop me if you’ve heard this one before), Melancon came in, got Dansby Swanson to ground out, but then a single by Matt Olson and a double by Austin Riley ended the game rather quickly.

I could probably look this info up, but for argument’s sake let’s say this is the 9th time that Melancon has come into a tie game and promptly turned it into a loss. I’ve seen the numbers on why it’s a good idea to bring your closer into a tie game in the 9th inning or later, but can we maybe try something different?

191 comments in the Game Day Thread, COTD goes to Heath Klein on Melancon’s appearance. No time to clench, indeed. 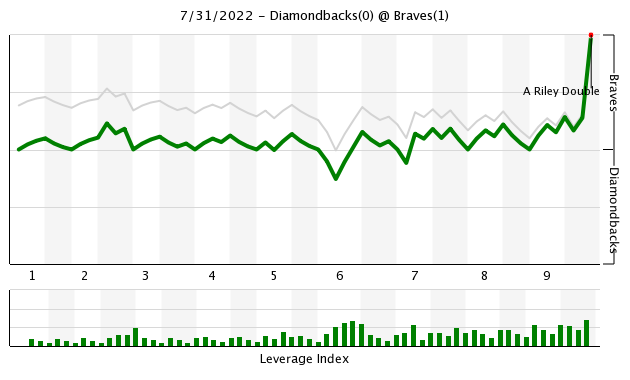 And so, the Diamondbacks follow up their best season of the series, by suffering a sweep. They'll hope for better on the next leg of thus road trip, which takes them to Cleveland. The first game of that series is tomorrow, and starts at 4:10 pm. The Arizona starter is yet to be announced. Could be a replacement for Tyler Gilbert, though with the off-day last Thursday, they could also use Zac Gallen on regular rest, and punt the replacement question to Tuesday.