It’s a rookie move to assume the Dbacks have it in the bag after five runs at Coors. Call me Rookie of the Year.

I may have played Bloody Mary in my high school production of South Pacific, but like Nellie Forbush, about some things, I am a cockeyed optimist, immature and incurably green. Take, for instance, assuming that after five runs, our boys in red had it made in the shade. I guess I just haven’t been a Dbacks fan long enough, or I am content to wade hip-deep in the River Denial. Maybe a little from Column A, a little from Column B.

Anyway. I had plans for this recap, and they all revolved around the Rockies’ hilariously wretched uniforms, which Steve and Bob informed the viewing audience were based on the Colorado license plate. Indeed, Dano remarked they looked like a motocross team that stumbled into a baseball game, and I concurred, adding they looked like motocross mechanics. I was all set to call this recap "Kuhl Uniforms, Bruh," but then chit got kinda real in the bottom of the 6th, and even more real in the bottom of the 8th, and then the Dbacks, well, Dbacked, as we are wont to do.

As Jack pointed out in the series preview, this game looked like it was shaping up to be a pitchers’ duel between Zac Gallen and Chad Kuhl, and for the first few innings, it certainly looked thus. Kuhl turned in a 1-2-3 at the top of the first, with Josh Rojas flying out to Connor Joe, Alek Thomas grounding out to Elehuris Montero, and David Peralta flying out to Charlie "Check Out My Beard and My Creepy Walkup Music" Blackmon. The Rockies managed a single in the bottom of the first, with Yonathan Doza hitting a ground ball to Daulton Varsho in right field, but otherwise, we saw Connor Joe strike out and Blackmon and C.J. Cron fly out.

The Dbacks managed some singles off Kuhl in the top of the second, courtesy of Varsho, Buddy Kennedy, and Geraldo Perdomo; thanks to a forceout by Cooper Hummel, Varsho came home, while Hummel made it to first, and Kennedy was out at second. Jose Herrera flied out to Daza, ending the top of the second, but we were on the board. 1-0 DBACKS

The bottom of the second and the top of the third were pretty uneventful, with Gallen walking Brendan Rodgers, Ryan McMahon grounding into a DP, and Julio Iglesias lining out to Kennedy at second. The top of the third saw Rojas strike out and Alek Thomas and Christian Walker fly out, mitigated somewhat by a single on a sharp line drive by David Peralta. The Rockies’ third was a 1-2-3, with Elias Diaz flying out to Varsho, Elehuris Montero striking out, and Connor Joe grounding out "sharply," per MLB.com. The fourth was also a total blip on the radar, with both teams 1-2-3ing.

Then came the Dbacks’ fifth and my gooey, chocolate-covered, completely unjustified faith in humanity and Dbacks baseball kicked up to 11 when David Peralta hit a grand slam homer, bringing in Herrera, Rojas, Thomas, and, of course, himself. Next time, I will remember to eat my vegetables and listen to the whip-smart folks in the comment thread, who wisely pointed out that, y’know, mebbe five runs weren’t gonna cut it for the Dbacks, especially not at Coors, where the air is so thin that even my deeply fatphobic maternal grandmother would have urged it to eat a burger. But for the remainder of the fifth, especially as the Rockies basically went down swinging (McMahon walked; Rodgers ground out, Jose Iglesias grounded into a forceout, sending McMahon back to the dugout, and Elias Diaz grounded out as well), I was content to metaphorically feast on 4th of July confections like apple pie and Cool Whip. 5-0 DBACKS

Robert Stephenson and his moustache were brought in to replace Kuhl at the top of the sixth and were promptly given the hook in favor of Lucas Gilbreath. Kennedy lined out to Blackmon; Cooper Hummel singled; Geraldo Perdomo reached first on a fielders’ choice; Herrera flied out to Daza; and Rojas was called out on strikes. Oh, yes, and there was that weird business at third, with Hummel stealing and Colorado challenging the call because Hummel…knocked the ball under the third baseman’s glove? That was iffy, but the call stood. Perdomo also managed to steal 2nd. Looked good for us, except, well, then it kinda sorta didn’t.

Gallen was still pitching in the bottom of the sixth, which may have been our undoing, in panoply of ways. Things looked, well, okayish at first, with Montero singling, Joe lining out, Daza singling, and Blackmon getting called out on strikes. And then, we had what a few of our intrepid bunch were terming, in the comments, a return of Cron’s disease. (Don’t look at me; I just said it to Dano in the privacy of our living room.) C.J. Cron homered on a fly ball to left center field, bringing home Montero and Daza. Suddenly, as Dano pointed out, the game got interesting, in that "may you live in interesting times" sort of way. Rodgers lined out to Varsho, but the damage had been done. 5-3 DBACKS

The Dbacks got two singles off Gilbreath in the top of the 7th, thanks to Thomas and Christian Walker, but Peralta grounded into a double play and Varsho was called out on strikes. Joe Mantiply, aka Mantiply Joe, replaced Gallen in the bottom of the 7th, and did the business fairly well, with the Rockies getting only one single off him thanks to Iglesias (McMahon and Montero flied out; Diaz ground out "softly," tm MLB.com).

Bird was the word at the top of the 8th, with Jake Bird in for Gilbreath. He turned in a 1-2-3, grounding out Kennedy and Perdomo and lining out Hummel. And then, our old friend Ian P. Kennedy replaced Mantiply, and the Handbasket Express went straight to Hell. And not for the usual reasons, this time – somehow, Ian P. Kennedy managed to injure himself, and Noe Ramirez was in. Alas, Daza got a single off Ramirez, as did Blackmon, and then Cron (CROOOOOOONNNNNNN!!!!!!) just had to do that thang again and hit a three-run homer, bringing in Daza and Blackmon and robbing goofballs like yours truly of our last vestiges of goodwill. Kyle Nelson promptly replaced Ramirez and managed to get two more outs, but, well. 6-5 ROCKIES

Daniel Bard was in for Jake Bird at the top of the 9th (how adorable – the Bard took over for the Bird), striking out Ketel Marte. Rojas doubled, and Bard intentionally walked Peralta, for which I don’t suppose I can blame him, but it was bad news for our side. And because this is how we do, the bases were loaded, and Varsho grounded out, thus ending the game. 6-5 ROCKIES FINAL

CoTG goes to Jim McLennan, and not just because I’m mentioned in it. Maybe next time, I’ll win, to paraphrase Liza in Cabaret: 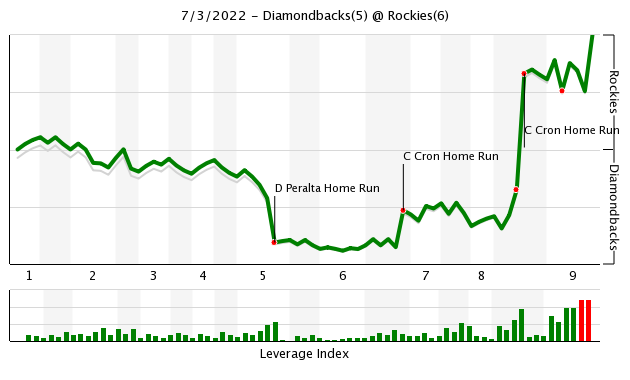 Join us at Chase tomorrow, when MadBum faces his old home team, the Giants, and Dano and I get grilly with it with a bunch of swordfish and fresh fruit, like ya do.

As always, thanks for watching, and as always, go Dbacks!