TL;DR: Corbin Martin struggled to pitch consistently, the bats failed to capitalize on 13 at-bats with RISP, and a combination of sloppy play and a lack of execution sank any possibility of a D-Back sweep of a struggling Nats team.

Sometimes baseball catchphrases grate at me: "He got a good jump;" "That ball should be playable;" "The tying run is at the plate." But as my dad and I are fond of saying, cliches exist because there’s a kernel of truth in them. There’s a saying that playing a day game following a night game results in a sloppy game. After watching tonight’s game, I’m willing to confirm that kernel of truth once again. From the outset, it looked like both teams were sleepwalking through the game: they combined for four errors, the energy seemed low through much of the game, and there were any number of mental errors that don’t come across in the box score. Maybe we should consider changing the schedule somehow (/sarcasm)?

The two starting pitchers were emblematic of these small errors: the two combined to pitch 8.2 innings while allowing an astounding 20 baserunners. Corbin Martin - looking for consistency from previous outings - struggled to find the strike zone early and often (cliche intended). Cesar Hernandez bailed him out after working himself into a 3-2 count to leadoff the game, and Martin followed with a cautious, four-pitch walk to Juan Soto (understandably). Luckily, Martin managed to produce the pitcher’s best friend: a 6-4-3 double play to end the first.

For their own part, the Diamondbacks struck back quickly: a Josh Rojas single into left-center preceded a seeing-eye single from Alek Thomas. Some aggressive base-running (and poor defense from the Nationals) allowed the two runners to advance and made it second and third with no outs. Ketel Marte then lofted a ball into center to bring in the first run of the game and quickly made it 1-0 D-Backs on just the third batter of the game. Even better, the D-Backs weren’t finished as Daulton Varsho mashed a single into right that scored Alek Thomas who had advanced on a wild pitch to make it 2-0 D-Backs. Unfortunately, a soft grounder from Sergio Alcantara kept the Diamondbacks from extending their lead any further.

Looking for a shutdown inning, Martin again displayed inconsistency and he was again bailed out by his defense. After a lazy flyout from the unaging Nelson Cruz, Yadiel Hernandez launched a double into deep center and Luis Garcia made a bid for a hit of his own. Alek Thomas however was having none of it and made a nifty play to snag the ball just off the ground. Martin again lost the strike zone with a four-pitch walk to Keibert Ruiz, but a nice grab from Christian Walker ended the scoring threat.

Following a 1-2-3 inning from the D-Backs, Victor Robles took Martin’s first pitch of the third inning into right field for a single that would have been a double if not for a strong cutoff from Varsho. After a sacrifice bunt from Cesar Hernandez, Martin could not find the strike zone with a GPS as he walked Soto (again), Josh Bell, and Cruz consecutively. The only reason the Nats didn’t score? An excellent throw from Jose Herrera and a questionable out call at third when Robles tried to move himself 90 feet from home. Hernandez softly grounded out, but the sense of trouble was brewing as Martin had thrown nearly the same number of balls and strikes through the first three innings.

Not to be outdone, the D-Backs created some traffic for themselves with a ringing double from Marte preceding a single from Christian Walker. David Peralta couldn’t get the ball out of the infield and quickly grounded into an inning-ending double play. Unsurprisingly, Martin’s lack of command finally bit the D-Backs (pun intended) as Ruiz stung a ball to the right center fence for a stand-up double and Ehire Adrianza followed with a ringing single to make it 2-1 D-Backs. Martin escaped without any further damage, but his night was already over after just four innings.

This D-Backs team, however, continues to pick one another up and the offense quickly responded in the bottom half of the inning. Varsho worked a leadoff walk, but after Alcantara and Geraldo Perdomo failed to move him along, he took it on himself. He had a fantastic jump and a clean steal of second, but Ruiz tried to play the hero and instead airmailed the throw into center to allow Varsho to advance all the way to third. Then, with two outs, Rojas continued his fantastic game by lacing a single into right and immediately restoring the two-run lead for the D-Backs at 3-1.

Even better, Kyle Nelson came in to replace a struggling Martin and quickly dispatched the top of the Nats’ batting order to give the fans that much more comfort. That comforting feeling quickly dissipated in the desert sun as D-Back hitters squandered scoring opportunities in the fifth and sixth innings, while the Nats were able to take advantage of mistakes. The top half of the sixth certainly represents the most frustrating of those mistakes. After Caleb Smith came in to replace Nelson, Hernandez knocked a single into center and then Garcia struck out on three pitches. Ruiz followed by ringing a ball down the third base line that Rojas expertly snagged and tried to one hop to Christian Walker, but the ball squeaked by when he couldn’t quite get low enough and the ball instead ended up in right field to score Hernandez and allowed Ruiz to reach third and made it 3-2 D-Backs. Ruiz was picked off of third base by a heads-up play by Herrera, but the damage was done.

That frustrating trend continued into the seventh as a walk to Hernandez and a ringing double down the line from Bell scored the tying run for the Nationals at 3-3. Bell’s double was originally ruled as a ground rule double, but it was quickly overturned and Bell was correctly placed at second with Hernandez scoring on the play. The D-Backs were unable to capitalize on traffic in the seventh either. Instead, the Nats manufactured a run with a Lane Thomas double, a sacrifice bunt from Garcia, and a single from Ruiz to give the Nats their first lead of the game 4-3.

Finally, just as you were ready to call it an evening to go get groceries and shut the game off, the D-Backs created a golden opportunity for themselves once again in the eighth. They managed back-to-back singles from Jake McCarthy and Rojas ahead of a hit by pitch on Thomas to load the bases with no outs and the heart of the order due up. But then the D-Backs managed to steal defeat from the jaws of victory with a soft popup to shallow center field from Marte and an inning-ending double play from Walker. Mark Melancon entered in the ninth to have a vintage Melancon inning: two walks, a popup, a strikeout, and a groundout. Meanwhile, the D-Backs put together a couple tough at-bats, but otherwise had an uneventful 1-2-3 bottom of the ninth.

D-Back of the game (or DOG if you will): Undoubtedly, I have to award this to Josh Rojas. He continues to demonstrate growth and show that he can be a solid bat at the top of the lineup. Tonight was his 14th multihit game of the season and continues an excellent July where he’s slashed .322/.420/.509, which works out to a .929 OPS. Let’s not mention the "error" and focus on the positives, shall we? 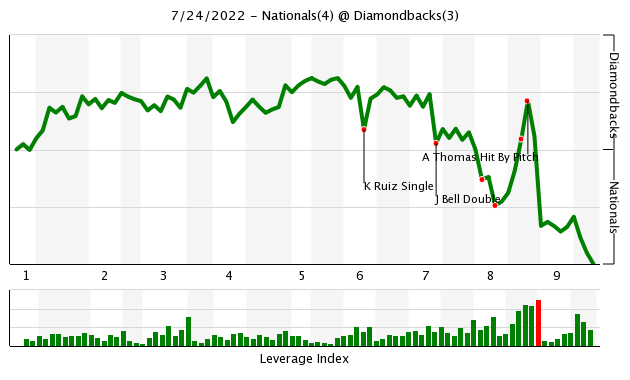 Comment of the game to Snacks&Dbacks. Let's finish on a positive.

The Diamondbacks get to stay in Arizona, starting a three-game series against the Giants tomorrow night. First pitch is at 6:40 pm, with Tyler Gilbert starting for Arizona.