Whither the Dbacks offense, ye landlubbers?

Either way, this series was gonna be a heartbreaker for me. In 1979, at the developmentally fecund age of three, I osmosed the Pirates winning the World Series against the Orioles. It was an unusually festive time in our grim little household, thanks to my dad’s uncharacteristically manic joy and my own unconscious gratification at sticking it to my equally grim hometown (Harrisburg, Pennsylvania – then, as now, primarily a Phillies market). As every baseball fan knows, that was the last time the Pirates saw a World Series. We came so very, very close in 1992, the night before my sixteenth birthday, when the umpire called That Pitch in favor of the Braves, and we were out of contention. I will never forget my poor, sweet dad standing at the door of my room, watching the final wrap-up, looking like he’d been clobbered with a five-pound cast-iron skillet. "I had World Series tickets in my hand," he repeated at least ten times. Except for one wild card game in 2016, the Pirates have not seen the postseason, or "Buctober," since.

I’d never counted on rooting for the Dbacks, or moving to Tucson, but during the worst of the pandemic times in 2020, Dano and I reconnected on Zoom, declared our love for each other, and became a couple, so I embraced the often-difficult situation of Dbacks fandom with the same steel that saw me through decades of rooting for the Pirates. Over the past two years, I have developed an exasperated but genuine fondness for Los Serpientes, but Pirate-ittude is deep in my bone marrow, and thus, regardless of outcome, these three games were bound to be an emotional Gordian knot.

We began the game with the Battle of the Zac(h)s, Thompson and Gallen, respectively, turning up a quick first inning, with a 1-2-3 in the top featuring a flyout by Daulton Varsho, a popout by Josh Rojas, and a strikeout by Ketel Marte. Gallen turned up similar fare, forcing out Ke’Bryan Hayes (whom Gallen walked) and striking out Dan Vogelbach, whose name makes me think of a cross between Dan "I Can Dream About You" Hartmann and John "Center Field" Fogerty. Reynolds was caught stealing second, and we motored to the top of the second, where Thompson stranded Alek Thomas and David Peralta at first and second, respectively. The bottom of the second and the top of the third were 1-2-3s, including a groundout by Pirates homerun hero Jack Suwinski and Josh Rojas, per MLB, grounding out "softly" to Thompson. (Killing me softly with his song, maybe – not sure about the rhetoric of that word choice, but whatevs.)

The first actual dynamic activity took place in the bottom of the third, when Gallen lost his momentum just a wee tad, walking Tucupita Marcano, who made it all the way to third after singles by Tyler Heineman and Cal Mitchell. The bases were loaded, and things were looking fraught and a bit ugly. Fortunately, the pitching gods whispered in Gallen’s ear and he was able to net two strikeouts in a row, against Ke’Bryan Hayes and Bryan Reynolds. Light classic rock god Vogelbach ground out to Christian Walker, and what could have been a disaster was mercifully averted for the time being.

The fourth inning saw minor seismic action from both teams, with Pavin Smith singling to Diego Castillo on a sharp ground ball in the top and Jack Suwinski doubling in the bottom. Alas, no one was yet on board; frankly, the game, at this point, was, at once, tense and tedious, and I confess to busying myself with preparing some bacon and garlic toast for Dano and me in the bright, spacious kitchen of our BRAND NEW RENTAL HOUSE ZOMG BBQ. More blips, but no actual score, in the top of the 5th, with Jose Herrera and Josh Rojas singling and getting stranded at first and second. Then the Pirates opened up the bottom of the fifth with a solo home run to right, courtesy of Cal Mitchell. Maybe it was my bad-ittude that soured it for the Dbacks (or maybe my Pirate-ittude is stronger than I thought it was? Who can say), but my spirit kind of noped out after that, even though it was only one run and we have come back from greater depths. 1-0 PIRATES

Zach Thompson was replaced by Will Crowe in the top of the sixth; Crowe promptly 1-2-3-ed us with strikeouts by Walker and Smith and a groundout by David Peralta. Zac Gallen was still in it, racking up his pitch count, at the bottom of the 6th, but more damage was done, with Jack Suwinski doubling on a sharp line drive to Pavin Smith and subsequently stealing 3rd, clearing the way for Diego Castillo to hit a sac fly and allowing Suwinski to score. It was around this time I recall Steve Berthiaume and Bob Brenly remarking that the offense had gone AWOL; perhaps they were choosing to frolic with dolphins a la Hitchhiker’s Guide to the Galaxy rather than go Jedi swords with the Bucs, like they are ostensibly paid to do. I mean, I’d choose the dolphins, but there is a reason I am not paid the big Bucs (see what I did there?). 2-0 PIRATES

The top of the 7th saw Anthony Banda in for Will Crowe and Jordan Luplow replacing Jose Herrera. Geraldo Perdomo singled on a line drive to Bryan Reynolds, to no avail, as Luplow struck out and Varsho lined out to Cal Mitchell. Kyle Nelson was in for Zac Gallen at the bottom of the 7th, turning up a double by Tyler Heineman, a single by Ke’Bryan Hayes, and a stolen base, also by Hayes. Tyler Heineman scored, thanks to Ke’Bryan Hayes’s single, and we were 3-0 PIRATES

Chris Stratton was in for Anthony Banda at the top of the 8th, racking up yet another Dbacks 1-2-3 with Rojas and Marte grounding out and Christian Walker striking out. Sean Poppen was in for Kyle Nelson at the bottom of the 8th; Jack Suwinski singled, because of course he did, and so did Diego Castillo. Fortunately, Michael Chavis popped out, Tucupita Marcano grounded out, and Tyler Heineman flied out, thus putting the stopper on any more Pirates runs. Unfortunately, David Bednar was in for Chris Stratton at the top of the 9th, and promptly struck out David Peralta and Pavin Smith. Alek Thomas grounded out to second, and that was that. 3-0 PIRATES FINAL

There is no joy in Mudville, or Dirtville, in my case, since the backyard (ZOMG DANO AND I HAVE A FREAKING BACKYARD) from which I write this recap is a Tucson Lawn, as they call it. I was going to feel like schizz, to a certain degree, either way, and I knew that going into this assignment, which is probably why I lobbied Jim for this slot, because I am an artist and a masochist. But as I was remarking to Dano postgame, I am actually rather sadder for the Dbacks than I am happy for the Pirates, which I take to mean I am finally cutting my ties to home and growing up a little bit. A good thing, in part, but like, this series overall, bittersweet for me.

Bells and Whistles, by Dano 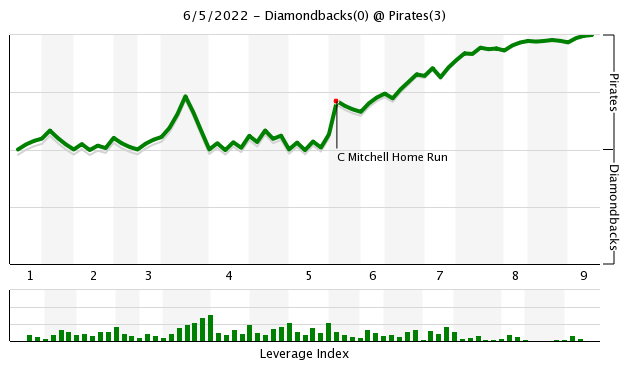 In honor of Elvis, TheRealRamona selected these WPA categories:

The Gameday Thread was very sparsely populated, with a whopping 114 comments. Sure, first pitch was before 11am AZ time, and sure, it wound up being a kind of sleep-inducing bummer of a game, but that's just sad. Nothing turned Sedona Red at time of writing, so no CotG, alas.

Join us tomorrow on the air in Cincinnati, where we face off for a four-game series against the hapless Reds.Madison Bumgarner faces off against Reds righthander Hunter Greene. First pitch is at 6:40pm 3:40pm (h/t Oldenschoole) AZ time. Hope you can join us.

As always, thanks for reading, and as always, go Dbacks!