The Diamondbacks saved all their runs and hits for the final game of the series, with every starter reaching base and scoring or driving in a run. Pavin Smith led the way with 3 RBI on 4 singles, while Daulton Varsho provided some insurance with a 3-run HR to cap a 5 run 6th inning. Carson Kelly even did something with his bat, too! Dallas Keuchel was serviceable, if not lucky, pitching into the 5th inning, while the bullpen mostly did their job.

Despite being on a 5 game losing streak overall, the Dbacks did enter today’s game on a 2 Sunday winning streak. As anticipated/expected, Dallas Keuchel was added to the 40-man roster and activated to make the start in the 5th spot in the rotation. Jim and Jack’s preview for today noted that it meant there weren’t too many expectations from a pitching statistics perspective, and Keuchel largely matched that.

Keuchel set down the Tigers in order in the 1st inning on 12 pitches, but was behind in the count to every batter. He then got Tigers CF Riley Greene to ground out to start the 2nd, but then gave up 3 straight hits, the last being a 2-run triple by RF Willi Castro for a 2-0 Detroit lead. The radio team had specifically said at the start of the game that they weren’t going to talk about Keuchel’s stats so far this season, his last start being a month ago against Boston. That silence lasted 5 batters into the 2nd. Keuchel escaped without any more damage, and then worked around a single and a walk in the 3rd.

The 4th and 5th innings weren’t as kind. Keuchel struck out the first two batters in the 4th, but then gave up a single, a BB, and an RBI single to Robbie Grossman for a 3-2 Detroit lead. In the 5th inning, Miguel Cabrera led off by striking out, but after a walk to Riley Greene, Keuchel’s day was done after 4 ⅓ innings and 98 pitches - only 55 for strikes. J.B. Wendelken came on in relief, but promptly walked Spencer Torkelson and gave up a 3-run HR to Eric Haase for a 6-5 Detroit lead.

In the meantime, the Dbacks bats were mostly silent for the first 2 innings against Detroit starter Beau Brieske, who won today’s award for best name. The bats finally got going in the 3rd inning, when none other than Carson Kelly went yard for his first home run of the season. The Dbacks loaded the bases with 1 out on walks to Geraldo Perdomo and Ketel Marte, sandwiched around a Pavin Smith single. Christian Walker brought Perdomo home on a sacrifice fly (and great catch by Riley Greene, who seems to be a real stud in center.), and we were tied at 2.

After the first couple of raindrops in the 3rd, the downpour came in the 4th, 5th, and 6th innings. In the 4th, a 1-out single by Daulton Varsho and a walk to Kelly started things off. After Perdomo popped out, Josh Rojas brought Varsho home with an RBI single to CF, and then Pavin Smith added another single, this time of the 2 RBI variety, to reclaim the lead at 5-3. The 5th inning saw the bases loaded with no outs after walks to Walker and Kennedy, sandwiched around a Peralta single (seems to be our preferred way to load the bases today). A run came in on a Carson Kelly sacrifice fly to tie the game at 6.

The 6th inning broke the game open. Against the 3rd reliever of the day, Detroit RHP Will Vest, the Dbacks put up a 5 spot. Rojas doubled to left and Pavin Smith brought him home with yet another single. After Marte walked and Walker reached on a weird fielder’s choice that saw Pavin Smith tagged out at 3rd, Peralta singled and Buddy Kennedy hit a sacrifice fly to score Marte. Varsho then wasted no time at all and deposited a 3-run HR into the first row of bleachers above the pool to make it 11-6 Diamondbacks.

Much like my last Sunday recap against Philadelphia, there really wasn’t much to the rest of the game. Wendelken settled down in the 6th, Noe Ramirez and Ian Kennedy came in for the 7th and 8th, and Detroit was about to go quietly, except Melancon came in for the 9th and made it a little interesting after walking Kody Clemens and giving up the 3054 hit of Miguel Cabrera’s career (breaking a tie with Rod Carew for 27th, and now 1 away from Rickey Henderson) and an RBI groundout to Riley Green.

121 comments in the Game Day Thread, but nothing went red, so no COTD today. Better luck to someone next time!

Bells and whistles, somewhat by Jim

Delayed, due mostly to me being at a concert tonight, though I see someone did drop in an appropriately Potter-themed WP winners and losers... Here's your graph! 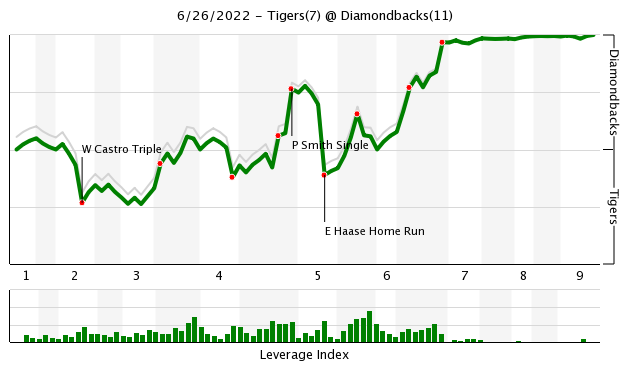 There's a day off tomorrow for the Diamondbacks, before a quick two-game set starts against the Padres at Chase Field on Tuesday. Thanks to Txdback for the guest recap!