Arizona salvaged a game in the series by putting up crooked numbers in the 1st, 6th, 7th, and 8th, despite hitting only 1 HR and going 4 for 19 with runners in scoring position. 11 BB by Phillies pitchers contributed to the run total, along with Christian Walker going 3 for 5 with 3 RBI’s and falling a HR short of the cycle.

In doing some preparation work for today’s game I had some second-thoughts about volunteering for a guest recap. First, prior to today’s outcome the Diamondbacks were 1-8 this season when playing on Sunday, which had also caused me to briefly reconsider wearing my normal Sunday afternoon lucky gray ‘A’ t-shirt. Second, I really don’t like bullpen games, especially when one has a bullpen like ours. And finally, interim Phillies manager Rob Thomson was off to an 8-0 start after replacing Joe Girardi. Today just didn’t seem like the day that something was going to give.

The Diamondbacks proved me wrong very quickly in the 1st inning by putting up a crooked number with only 1 hit. The first 3 batters reached via a walk, single, and failed fielder’s choice by Phillies 3B Alec Bohm who failed to tag Jordan Luplow going to 3rd or force Josh Rojas at 2nd. After Christian Walker lined out to 3rd, Pavin Smith hit a comebacker to Phillies starter Ranger Suarez. JT Realmuto dropped the ball at home plate, 2 runs scored, and my coworker texted me something about how bad the Phillies defense is. Another run scored later in the inning on Daulton Varsho’s RBI groundout and we were up 3-0 after our half!

Pitching-wise, Kyle Nelson "started" by getting through the first inning courtesy of a flyout, walk, and Bryce Harper double play. We managed to get the first 2 runners on in the 2nd, but our issues with RISP started to flare up as nothing happened after that. Luke Weaver came in for Nelson and pitched around a Realmuto double in the 2nd.

Walker started on his journey to a near cycle by hitting a leadoff triple in the 3rd, but Pavin Smith, Carson Kelly, and Daulton Varsho failed to bring him in. At this point in the game we were 0 for 10 with RISP.

Weaver got through the 3rd untouched, but gave up a run in the 4th on a 2-out Alec Bohm single. Walker got the run right back for us in the 5th with an RBI double to drive in Josh Rojas, who had walked. Smith and Kelly failed to get Walker in, though, despite a wild pitch moving him to 3rd. 0 for 12 with RISP, but 4-1 Arizona.

Caleb Smith came in to pitch the 5th inning for us, and somewhere in between loading the bases with 2 walks and a Rojas error, Gonzo made a comment on the radio broadcast about the Diamondbacks "hanging in there" with a 3 run lead. Felt about right. Noe Ramirez relieved and struck out Nick Castellanos and Realmuto to preserve the lead.

The game was broken open in the 6th inning with 4 runs and our first two hits with RISP. After a Varsho strikeout, Alek Thomas walked. Geraldo Perdomo popped out, but then Jordan Luplow was hit by a pitch to get on base for the third time without a hit. Josh Rojas came through with a single to drive in Alek Thomas, Ketel Marte walked, and then Christian Walker moved ever closer to the cycle with a 2-run single to center. Two more walks, including a bases-loaded RBI walk by Carson Kelly (who otherwise sounds like he has no idea what to do at the plate), and we had put up a 4-spot to take an 8-1 lead.

The rest of the game wasn’t much of anything after that, beyond waiting for Christian Walker’s next at-bat to see if he could hit for the cycle. Joe Mantiply came on for Noe Ramirez and mowed down the Phillies to close out the 6th and the 7th. We scored another two runs in the 7th after loading the bases with no outs, enduring a 1-2-3 double play, and then getting picked up by a Ketel Marte 2-run single for a 10-1 lead. Marte TOOTBLAN’d for the final out to push Walker’s next at bat to the 8th inning, where he walked and scored later in the inning on an Alek Thomas 2-run single to make it 12-1 Diamondbacks, making us 4 for 19 with RISP,

Sean Poppen pitched the 8th inning and worked around 2 hits, courtesy of a TOOTBLAN by JT Realmuto after the 2nd hit. And then we were on to the 9th inning, where Walker would be the 3rd batter up in search of completing the cycle.

HOME RUN!! Except, unfortunately, it was by Jake McCarthy who had come in for Ketel Marte’s spot in the lineup. Walker grounded out on the first pitch he saw, and then Mark Melancon came on to protect a 12 run lead and save the game for us. Guess I’ll keep wearing my lucky grey shirt.

219 Comments in the game day thread, and the only one to go red and earn COTD was by MrRBI17: 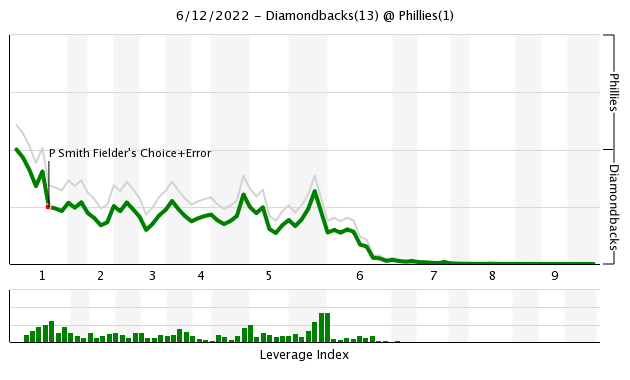 Despite the offensive outburst, it was a pitcher who takes top spot. It goes to Noe's Houdini act, getting consecutive strikeouts after the tying run was on base for the Phillies with one out. It definitely felt like the momentum went out of the Phillies, and Citizens' Bank Park as well, after their team failed to score.

Thanks to TXdback for their excellent guest recap. We still have slots open on the 19th and 26th, if anyone should be interested. Speak up in the comments if so. As for the D-backs, the road-trip finishes 4-5 which is... well, I think we all hoped for better. Still, home they come, with a three-game series against the Reds starting tomorrow at Chase. First pitch is 6:40 pm, and