TL;DR: Merrill Kelly looked shaky and had to grind through five innings, the offense battled back from a deficit to take the lead, and the bullpen coughed up the game late.

It took Wade Miley just six pitches to retire the D-Backs in the first with Daulton Varsho, Jordan Luplow, and Ketel Marte deciding the best strategy was to swing at the first close pitches. Varsho grounded out weakly while Luplow and Marte had loud outs to center. I barely had a chance to open my laptop before the half inning was over.

Merrill Kelly failed to mirror Miley’s effort as Rafael Ortega flew out lazily to left before Jonathan Villar battled his way into full count and then flew out to center. Seiya Suzuki continued his excellent patience at the plate by working himself into a full count, but umpire Mark Carlson absolutely gifted Kelly with a called third strike for his first strikeout of the afternoon and the end of the first inning.

Christian Walker fought himself on-base to begin the second with some excellent plate discipline - including several close calls that he did not offer at whatsoever. Pavin Smith swung at a nasty slider to quickly strikeout ahead of Jake McCarthy’s lazy flyout to center. Alek Thomas and his six-game hitting streak were quickly retired with a hard groundout to Jonathan Villar.

Ian Happ leadoff for the Cubs in the bottom half of the second and launched a ball into the "Wrigley Jetstream" that absolutely played Luplow in left field, bounced off the ivy and allowed Happ to get to second. Patrick Wisdom then popped up to Drew Ellis. Wait, what?? Nope, the wind fooled Ellis after he called off the rest of the infield and it "dropped in" according to Steve Berthiaume *eye roll*. Unfortunately, Kelly momentarily lost his concentration - throwing six straight balls to load the bases with no outs. He immediately bounced back with an excellent pitcher’s pitch to strikeout Rivas and an easy popout in foul from Simmons to give the illusion of an escape. But, as sometimes happens in baseball, P.J. Higgins stepped in to make his 2022 debut and laced a ball down the first base line that cleared the bases to make it 3-0 Cubs. Kelly then lost the battle against Rafael Ortega, walking him on six pitches and making it seem as if his day might already be over. Ortega further advanced to second on a steal, but Kelly managed to strand both runners with a popout from Villar to end the inning.

In the third, Geraldo Perdomo got absolutely carved up by Wade Miley as he struck out on three straight pitches. Drew Ellis quickly grounded out to Wisdom, which included a nice scoop from Rivas on the other end. Varsho ended the inning by getting more solid contact that spun in the wind before finding Suzuki’s glove in right field.

Suzuki flew out to right on three pitches to begin the third, but Kelly continued to struggle with his command as he allowed a single to Happ and then walked Schwindel to put himself into yet another jam. Luckily, Schwindel and Rivas decided it was time to get back into the field as they both promptly flew out to center with some hard contact and a jam shot respectively.

Luplow sharply grounded out to third to leadoff the fourth (say that five times fast) for the D-Backs as they continued to look for their first hit of the game. Marte immediately found it with an infield single that Villar couldn’t quite handle to FINALLY break up Miley’s no-hit bid. Unfortunately, Walker doused even the possibility of a run-scoring rally by tailoring a 2-0 changeup into a inning-ending double play *cue failure horns*.

Kelly finally had a 1-2-3 inning in the last half of the fourth as he was able to get Simmons to popout and Higgins to flyout to center before Ortega weakly grounded out to end the inning and make it seem as if Kelly might have righted the ship - even as his pitch count continued to ramp up.

Pavin Smith collected the second D-Back hit with a cue shot into left field to leadoff the fifth inning. McCarthy followed with a fielder’s choice that should’ve been a double play if it wasn’t weren’t for the shift the Cubs had on at the time, which allowed Pavin to move up to second. Alek put up a fight in his AB, but couldn’t advance Pavin any further with a groundout to third. Geraldo Perdomo managed to see one more pitch than in his first plate appearance (four whole pitches), but was retired on a groundout to end any possible threat and strand Pavin at second.

In the Cub’s half of the fifth, Villar didn’t appear to want to be at the plate for too long and grounded out to Kelly on a single pitch. Suzuki followed him by beating out an infield single to third and then had to wait through a seven-pitch flyout to center from Happ. Wisdom grounded out to Perdomo to end the inning - and what ended up being the end of Kelly’s day on the bump.

Ellis pounded a ball that was low and outside into the right-center gap for the first D-Backs’ extra base hit to leadoff the visitor’s half of the sixth. He was able to tag up to third on yet another loud out from Varsho to deep center - where are the gaps for this man?? Luplow then swung through an excellent cutter, but Marte saved the D-Backs from a shutout with a solid single right up the middle to score Ellis and make it 3-1 Cubs. Miley wanted absolutely nothing to do with Walker as he uncompetitively walked him on four straight pitches. Pavin Smith promptly took advantage of the mistake with a line drive just out of Villar’s reach that scored Ketel to make it 3-2 Cubs and advanced Walker all the way to third from first. That score didn’t last long either as McCarthy delivered Miley’s second pitch of his at-bat into center field for a single that tied the game at 3-3. Thomas was only able to groundout to first to end the inning, but it was extremely encouraging to see the D-Backs hit so confidently with two outs and RISP.

Caleb Smith entered in relief of Merrill Kelly whose line for the day (5.0 IP, 3 ER, 5 H, 3 W, 2 K) was not stellar, but he managed to keep the D-Backs close and grinded through enough innings to keep from completely exhausting the bullpen. Whatever is in the Wrigley clubhouse water however similarly infected Caleb as he walked both Schwindel and Rivas on just five pitches each. He managed to get Simmons to rollover into a double play, but then immediately walked Higgins on five pitches yet again. Miraculously, Ortega came up swinging and weakly ground out to first to end the inning despite the complete lack of control from Caleb.

Perdomo rudely greeted Chicago’s first reliever - Keegan Thompson - in the seventh inning with a line drive to left that he considered stretching into a double, but wisely retreated. Ellis struck out on a nasty fastball that just nicked the outside corner, but Perdomo advanced to second on a 58-foot curveball from Thompson. Varsho finally broke through for the day as he muscled a ball into right for a single that advanced Perdomo to third. Torey Lovullo smartly pinch-hit David Peralta for Luplow to set up the righty-lefty matchup and Peralta quickly proved Lovullo’s trust in him by grounding into a fielder’s choice at second. The Cubs traded the run for an out with Perdomo scoring on the play to allow the D-Backs to take their first lead of the game 4-3. Marte airdropped a 2-0 fastball into Happ’s glove just shy of the left field warning track to end the inning.

J.B. Wendelken came in to relieve Caleb Smith in the seventh and executed the exact kind of shutdown inning the D-Backs needed after taking the lead. He managed to get Happ to fly out, Suzuki to strikeout, and Villar to groundout despite a double clutch from Marte that made the play a little closer than it needed to be for my anxiety.

Even as the D-Backs were desperately looking for insurance runs - and especially with the Wrigley Jetstream in full effect - McCarthy and Pavin battled, but succumbed to strikeouts. Walker meanwhile grounded out to second to keep any thought of a rally or insurance run firmly in our collective imagination.

Following a relatively punchless visiting half of the 8th inning, Ian Kennedy entered the game and immediately flirted with disaster as Wisdom smoked a ball down the third base line that Chris Guccione had a very difficult time ruling was fair or foul. Of course, the flirting quickly turned more serious as Wisdom absolutely smashed a ball to dead center to tie the score at 4-4. Schwindel then took just the second pitch he saw to the short porch in left field for another solo homer and retake the lead 5-4 Cubs. Rivas then ended Kennedy’s short, disastrous outing by punching a single into shallow right. Lovullo had thus seen enough of Kennedy for the day and brought Sean Poppen into the game to limit the damage. And boy did he ever limit the damage. Sean struckout Simmons and Higgins on six consecutive pitches and Ortega lined the first pitch he saw into left field, but Peralta made an excellent diving play on the ball to mercifully end the inning.

Now suddenly staring at a one-run deficit rather than a one-run lead, the D-Backs quickly went in order: Alek with a groundout he couldn’t quite beat out for a hit; Perdomo striking out on a filthy curve at the bottom of the zone; and Ellis lining out to center after a nice eight-pitch battle. *Sigh* Oh well. It really looked like the D-Backs could pull this one out after a decidedly mixed opening from Merrill, but alas, Kennedy and the cursed Wrigley Jetstream wouldn’t allow it. It’s always difficult to sweep four-game series, but especially when the bullpen struggles like it did today - or at least one member of it. 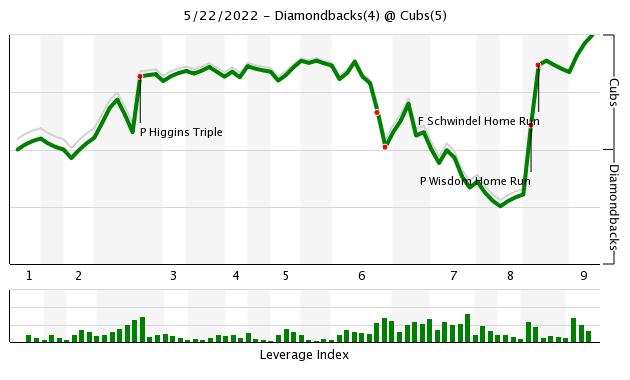 Only Sedona Red comment was the pic of me and SpencerSpice, during the highly enjoyable SnakePit get-together, so I can't really give that Comment of the Thread. :) However, we should do more of those meet-ups, maybe one Sunday a month somewhere. Suggestions welcome! Home to Arizona go the D-backs, for a quick two-game set against the Royals. Tomorrow night is a battle of the Zack/hs, with former D-back Zack Greinke taking on Zach Davies. First pitch there is at 6:40 pm.