In case you’ve been living under a rock, the success of the D-Backs’ starting rotation has been one of the dominant narratives early in the 2022 season. One of the most - pleasantly - surprising parts of that rotation: Madison Bumgarner. While the possible Hall of Famer had nothing more to prove (in my opinion at least), he was a player that looked like a ghost of himself in 2021 as he pitched to a 7-10 record with a 4.67 ERA across 146.1 innings.

And as if on cue, the southpaw has come out of the gate mad (*wink* *wink*) in 2022 as he’s pitched to an outstanding 2.29 ERA over 35.1 innings in his first eight starts - good enough for 10th in the major leagues. He’s also been incredibly consistent: allowing no more than 3 ER in all of those starts, which even includes the "awkward" ones. Even more, he’s been able to accomplish one of the most difficult feats in professional sports: reinvent himself as he ages. For someone who looked completely lost at times in 2021, his performance so far this season has been nothing short of miraculous *knock on every piece of wooden surface available*.

Now, before the "small sample size" trolls come knocking, it’s worth noting this season marks Bumgarner’s best eight starts by ERA to begin a season in his career and ranks among some of his best eight starts overall. I will absolutely cop to eight starts only representing ~ 20% of his starts for the year, but I would also argue that those are enough to at least begin getting a general direction or indication of his performance thus far. And almost all of those indications show that Bumgarner is absolutely rolling at the moment***

So, what exactly has Bumgarner been doing differently in 2022 compared to his 2021 version? Well, put simply, his cutter usage has spiked dramatically. Since he developed the pitch in his arsenal starting in 2016, he’s used it around 30% of the time. This year? It’s all the way up to 50% of his overall usage and has been the veteran’s putaway pitch thus far in the season with a 14.4 PutAway% (per Baseball Savant). Correspondingly, his fastball usage has followed a longer-term trend by falling all the way to 25%, which has allowed the lefty to keep batters off-balance to the tune of a 28.9 Whiff%.

Even more, when Bumgarner isn’t getting whiffs, he seems to be following the playbook many other pitchers are continuing to write around the league this year: pitch to contact and let your defense take care of runners. While Bumgarner has never been a strikeout pitcher per se - he topped out at 10 SO/9 back in 2016 when he came in fourth for the Cy Young - he’s only striking out 5 per nine innings. Instead, the veteran is inducing weak contact (6.3%) on the ground (38.4%) and trusting a spotty defense (currently ranked 13th in the NL by fielding percentage) behind him.

***Now, while I think the small sample size argument doesn’t hold much water at this point in the season, it’s entirely fair to point to Bumgarner’s expected stats as signs that his current results might be more by-products of luck rather than effectiveness. Currently, the lefty carries a hefty differential between his FIP and actual ERA: 4.56 versus 2.29 respectively. That differential would be the largest in his career and could theoretically indicate external factors contributing to his early success. We could point to any combination of factors as hypotheses here: the documented difference in the physical baseball, the compressed spring training, or just plain, dumb luck that could turn bad at any moment.

Similarly, while I take expected statistics - including expected BA, ERA, and SLG - with a slight grain of salt, they also show steep differences between the posted results and what those results "should" be. One need look no further than the below screenshot from Baseball Savant to get the vague sense that while the results have been great so far, a cliff may not be far away from the horizon. Particularly worrisome among those rankings? The fact that MadBum’s K% and Whiff% are both in the bottom-10 percentiles - even if those haven’t been dominant parts of his game in the past. 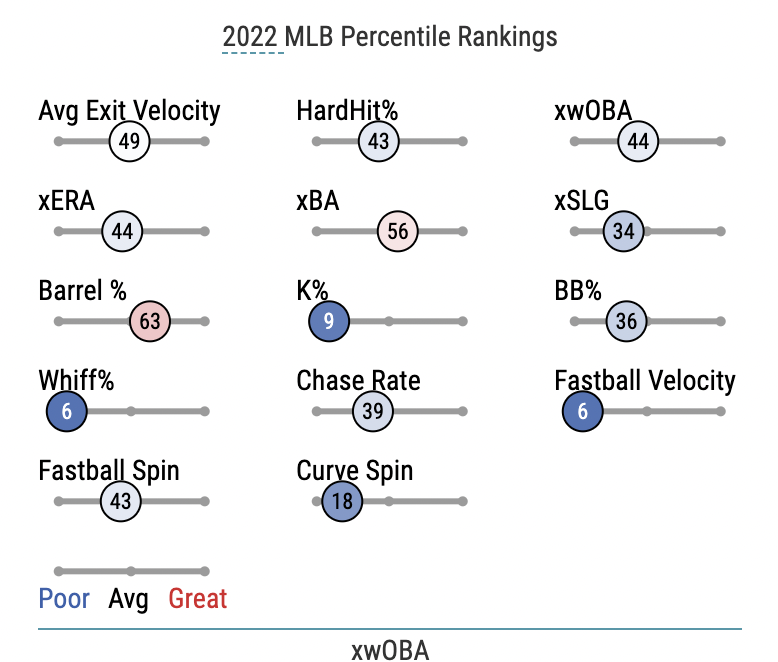 Despite this foreboding, what matters are the posted results at the end of the day - not what the projections predict. And for Bumgarner and the D-Backs, those results have been exactly what the two sides hoped to see when he signed with his top choice back in the 2019 offseason. He’s been an anchoring presence on the mound and (I hope) been able to mentor some of the budding stars in the D-Backs rotation - especially Zac Gallen.

In case it wasn’t obvious from my (admittedly arch) title, I am one of those D-Backs fans that is enjoying the current success of the team while also firmly believing that even if the team can prevent a 2021-level collapse, the roster isn’t currently deep enough to truly contend with the heavy hitters in the division, let alone the league as a whole. As a result, I am hopeful that Hazen & Co either stand pat - or more hopefully - continue to be sellers this year to further strengthen the roster overall. And at the moment, it’s hard to identify a better trade candidate on the D-Backs roster than Bumgarner himself: he’s over 30, has spectacular postseason experience, is under team control through 2024, and seems to have found new ways to get batters out in 2022.

On the buyer’s side of the market, it’s not difficult to identify any number of teams that need veteran starting pitching with postseason experience that can both mentor younger, up-and-coming pitchers, while also helping anchor a starting rotation through a postseason gauntlet. From the Mets (who just lost Max Scherzer for 6-8 weeks to go along with other injured starters) to the Angels who have had unlikely players take major steps forward, there are a number of contenders in the AL and NL who would jump at the chance to nab a veteran like Bumgarner. Of course, it could come down to the buyer’s ability to offer up the right combination of prospects to close the deal - especially as the D-Backs would likely look to further develop rotation depth to go alongside some of the position players making an impact now - here’s looking at you Alek Thomas!

HOWEVER, possibly putting a kibosh on any further speculation: the limited no-trade clause Bumgarner inserted into that 2019 contract. While the list of five teams wasn’t publicly released (at least as far as I can tell), the veteran would almost certainly have to be consulted before any trade could come to fruition. Unfortunately, this could be one of those decisions that makes more baseball sense while being personally repugnant as a fan of the D-Backs and Bumgarner himself.

It seems clear that he’s personally happy with the D-Backs (as much as MadBum ever seems happy) and may very well have turned a corner on the field as well. But at the same time, if an opportunity to improve the health of the franchise long-term were to present itself, it would be difficult to turn down from a pure baseball perspective - for the D-Backs or Bumgarner himself. For now however, let’s simply enjoy the ride and hope there aren’t any more staredowns from umpires.