On this day in 1905, L. Frank Baum’s The Wonderful Wizard of Oz was published. Framed as a children’s story, the novella was actually a parable about the United States coming off the Gold Standard. The 1939 film version, with which many more of us are familiar, was, of course, a gorgeous, splashy, largely apolitical musical extravaganza that did manage a nice, sly dig at the artifice of titularity (the Scarecrow is given a diploma and is suddenly smart; the Cowardly Lion is given a medal and is suddenly brave). And yet, after a game in which the second pitch turns into a homer and our closer falls down on the job to bring in the Cubs’ winning run, I can’t help but wonder if a medal, or an amulet, or some kind of totem, might help us actually bring home a win in a game that could well have gone our way.

I mean, look. We’ve all seen worse. The entire 2021 season after May 5 of that year leaps to mind. But dag, it would be nice to not punk out as much as we do when it’s not necessarily inevitable. And I did not think that was the case with this game. Yes, the Cubs’ Rafael Ortega homered off our pitcher, Humberto Castellano, on the second play of the game. That was not great, but our carrying that second pitch to prophecy did not have to happen. There is a song in the "alternate history" version of Oz, Wicked, called "Defying Gravity," in which Elphaba, the Wicked Witch of the West, sings about defying the Wizard and charting her own course. It is an amazingly powerful number about not living down to expectations. I really wish the Dbacks organization would take note.

Anyway, music theater nerdery aside, after the second pitch homer, there were a couple of nice ground-outs to first baseman Christian Walker, courtesy of Willson Contreras and Ian Happ, respectively. But then Saiya Suzuki doubled on a sharp fly ball to the awesome newcomer Alek Thomas (I just schep nakhes over this kid like he’s my own issue; I need to get a grip), thereby getting our collective knickers in yet another twist. Fortunately, the Cubs were unable to do any more damage at the top of the first; Alfonso Rivas grounded out to Ketel Marte, who passed it off to Walker. 1-0 CUBS

The bottom of the first started off right nice with Cooper Hummel tripling on a line drive to Suzuki in right field. There should be footage of Suzuki’s epic fumbling with the ball, but alas, there is not. And alas, Jordan Luplow struck out, Ketel Marte popped out, and Christian Walker lined out, again to Suzuki, who very possibly had something to prove after the epic fumbling. I still booed, though.

The top of the second was more of the same as the top of the first, with Patrick Wisdom homering on a fly ball to left center field. Frank Schwindel and Ildemaro Vargas both put up singles, but Jonathan Villar lined out to Josh Rojas and Rafael Ortega grounded out into a double play. Vargas was out at second; Ortega was out at first. Second verse, same as the first, pretty much, as we turned in a 1-2-3 at the bottom of the second (Pavin Smith, Daulton Varsho, and Nick Ahmed all struck out). 2-0 CUBS

The third inning was a mercifully brief 1-2-3 on both sides, but Castellanos was finally starting to settle down, which, yay. Castellanos proceeded to knock out Alfonso Rivas, Patrick Wisdom, and Frank Schwindel on strikeouts in a 1-2-3 top of the fourth. And then, in the bottom of the fourth, it seemed like our side finally took Elphaba’s advice and crawled up out of its own spine, with Jordan Luplow walking to first, Christian Walker singling on a sharp line drive to Ian Happ, and Daulton Varshow singling on a line drive to Seiya Suzuki, which brought Luplow home and Christian Walker to third. Christian Walker’s scoring on a fielding error courtesy of shortstop Ildemaro Vargas, but gift horses and mouths and all that. It helps that this is where the "pride of Lucedale, Mississippi," Justin Steele, began to lose it, but again, gift horses. And yes, Lucedale, Mississippi is a real place. I know this because I went to Ph.D. Skool in Hattiesburg and there are interstate signs for Lucedale. It’s somewhere on the Alabama border and has just a shade under 3,000 residents. 2-2 TIED

The most notable event of the fifth inning was Castellano hitting Contreras with a pitch. Our side was a 1-2-3, per much of today’s usual. After walking Suzuki and grounding out Rivas in the top of the sixth, Keynan Middleton replaced Castellanos, and promptly did the business by striking out Patrick Wisdom and lining out Frank Schwindel to mein kind, Alek Thomas. Again, 1-2-3 bottom of the sixth for us (Walker popped out; Smith and Varsho struck out). Kyle Nelson came in at the top of the 7th and replaced Middleton, which yielded a Cubs double (Cubble?) from Jonathan Villar. After grounding out Vargas and striking out Yan Gomes, who was pinch-hitting for Ortega, Noe Ramirez replaced Nelson, promptly grounding out Contreras.

Chris Martin (not the Coldplay guy) replaced The Pride of Lucedale in the bottom of the 7th, which was good for the Cubs but less so for us, which was indeed the point. Rojas lined out to Suzuki; Ahmed did a fine cover of Jane’s Addiction when he was picked off at second base; and Thomas popped out to Vargas. But we were holding steady into the top of the 8th, when Joe Mantiply took over for Noe Ramirez and pitched a 1-2-3 (Happ ground out; Suzuki and Rivas struck out). The bottom of the 8th saw Scott Effross replace Chris Martin and yet another 1-2-3.

And then, one Ian P. Kennedy took the mound at the top of the 9th, and my faith in humanity, always tenuous, was severed at the knees. Wisdom doubled on a sharp line drive to Thomas, and Schwindel singled on a line drive to Luplow, bringing Wisdom home. Kennedy was replaced by Caleb Smith, but not before grounding out Villar and striking out Vargas (I mean, yay? Too little; too late). Jason Heyward finished the top of the ninth by grounding out to Walker. The damage had been done, but it wasn’t so egregious that we couldn’t have recouped, maybe, if we’d – wait for it – only had the nerve. And maybe that’s not really the issue with our offense in the bottom of the 9th. I’m not the baseball scholar in the household. I can but imagine that David Peralta’s grounding into a double play was at least in part a failure of morale, because we seem to suffer from that in spades. But my take, perhaps wildly misinformed, is if we only had the nerve to, IDK, improve the bullpen or not put up the closers we do, tight squeaks like this might not happen against a team that does not look as good on paper as we do. I’m just saying. 3-2 CUBS FINAL

Bells and Whistles, by Dano 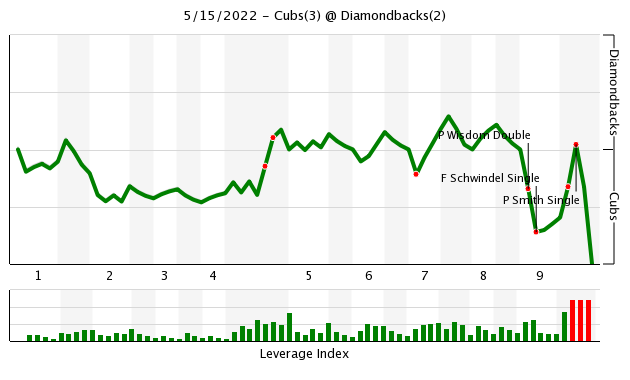 Dorothy Gale: Every Diamondback who threw a pitch, other than IPK: +33.6% WPA

The Gameday Thread was nicely well-attended, with 266 comments at time of writing. Not one but two comments went Sedona Red (both, somewhat amusingly, inspired and/or provoked by GuruB) so they are both included here. Here's the first:

And here is the second:

Join us tomorrow as we begin a three-day four-game set versus the hated FTD's. Bumgarner versus Gonsolin, first pitch at 7:10 AZ time. And the last word now, from today's guest recapper:

As always, thanks for reading, and as always, go Dbacks!