You know you’re in trouble when the first play of the game results in a guy getting to second on a throwing error. Of course, it could also be argued that just makes you an average DBacks fan. Sadly, Mark Canha’s single-turned-double pretty much set the tone for this matchup; two more Mets runs would go unearned, including Starling Marte’s at the top of the sixth on catcher Jose Herrera’s throwing error, and Luis Guillorme’s at the top of the eighth, courtesy of a throwing error by DBacks third baseman Sergio Alcantara. Meanwhile, our guys put up a virtual rotisserie of pitchers from the top of the seventh through the end. Your typical tale of DBacks woe, I guess, or at least low-level lamentation.

Speaking of woe, sad-eyed Madison Bumgarner kicked off the game with Canha’s aforementioned single. This is not at all an insult, as I am a huge fan, but it has always been deeply eerie to me how closely MadBum resembles the late, great Justin Townes Earle. After the Canha/Alcantara flub, we saw Starling Marte ground out to first and Francisco Lindor single on a line drive to center fielder Daulton Varsho. This brought Canha home, and my morale, which was already a bit low thanks to some grand theft auto ‘round these parts (the crime, not the game) and yesterday’s Pirates-Cubs debacle, slid down a bit in its Barcalounger. But it was early days yet, so I tried to remain positive. 1-0 Mets

The bottom of the first lasted, as was noted in the comments, about two minutes, with Mets’ pitcher Tylor Megill knocking out Varsho, Alcantara, and Peralta in embarrassingly short order. After a Mets’ top of the second in which J.D. Davis singled and James McCann grounded into a double play, the DBacks had another shot, which they promptly jettisoned in a one-two-three that lasted, yet again, about the time it takes to nuke a container of Hormel tamales (not recommended – those things taste like crap).

It was a bit of lather, rinse, repeat for both sides throughout the third, and again through the top of the fourth, until the DBacks were up again and Christian Walker, knocked one over the wall, bringing in a DBacks run. It was mentioned in the comments that Walker looked angry; I would be, too, if I chose that drippy emo country walkup music. Why not "Walk This Way"? Or "These Boots Were Made For Walkin’"? Geddit? But, hey, no one cares what I want, sob, sniff. 1-1

After a largely uneventful fifth, MadBum, whose pitch count at the end of that inning was 78, was pulled, and J.B. Wendelken was brought in, thus beginning our game of "Follow The Bouncing Pitcher." That was when Starling Marte doubled and subsequently stole third, and even more subsequently, stole home, on Herrera’s throwing error. Fortunately, Lindor flied out to Peralta and Pete Alonso ground out to Geraldo Perdomo. But unfortunately, the die had been cast. Megill was still in it, knocking down DBacks like Popeye trying to win Olive Oyl a stuffed bear at the carnival dunking booth. 2-1 Mets

The top of the seventh was where the game went off the proverbially rickety rails, with Edwin Uceta replacing Wendelken and promptly hitting Travis Jankowski with a wild pitch, taking care to spare his magnificent blond locks. That brought J.D. Davis home and brought Uceta off the mound. Taylor Widener was in, and damned if he didn’t hit Starling Marte with a crappy pitch, bringing Marte to first and Luis Guillorme home. At the end of that egregiously long half inning, the score was 4-1 Mets. Clearly, my entire body was feeling the pain; as I joined DanoInTuscon for the seventh inning stretch, I popped a joint in my foot and let out a yelp that caused Dano to express his concern from outside the house. Still, we at the ranch tried to remain positive, cheering when Perdomo hit a double and subsequently scored in the bottom of the seventh. 4-2 Mets

Seth Lugo replaced Tyllor Megill at the bottom of the seventh, but it was still downhill for our brave boys at the top of the eighth, with J.D. Davis homering on a fly ball to right center. Out came the vaudeville hook to yank Widener off the mound, and in went Oliver Perez. Luis Guillorme doubled; James McCann reached second on a fielding error by Alcantara, and Guillorme was home. The bottom of the eighth saw the DBacks do their thang, and do it about as well as they do, on an average day. 6-2 Mets

The top of the ninth saw Corbin Martin pitching, and with the exception of a Pete Alonso single, it was a fairly quick inning, as Marte, Lindor, and Escobar grounded out, lined out, and lined out, respectively. And, sadly, the bottom of the ninth went pretty quickly for the DBacks as well, with Seth Beer and Cooper Hummel striking out and Ketel Marte, who had been out for nearly the entire game, lined out to second. Final Score: 6-2 Mets

None of the comments went Sedona Red, so there’s no CoTG this go-round, although whoever commented "That was the worst inning ever" after the top of the seventh is not exactly wrong.

As always, thanks for watching, and Go DBacks! 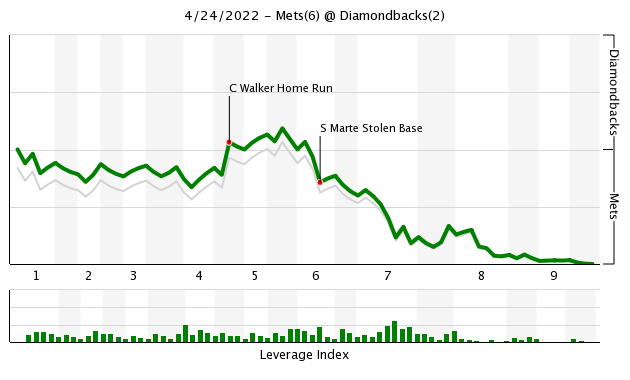 Thanks to therealramona for her sterling recap work! And so, the D-backs drop another series. They're still winless after five efforts, having lost three and split the other two. The team also committed more errors than they scored runs, continuing a concerning trend. They have now committed 18 in just 16 games. No other team in the National League has more than ten... Things won't get any easier for Arizona, since Los Angeles comes to town for a four-game set, starting tomorrow. Merrill Kelly gets the start, and it's a 6:40 pm first pitch.