The afternoon started out so well for the Diamondbacks. Padres starter Blake Snell was scratched right before the game with left adductor tightness. Starting pitcher Caleb Smith looked sharp in the top of the 1st inning striking out the first two batters. The wheels completely fell off in the 2nd inning though. Jake Cornenworth reached on an error by Ketel Marte. Smith proceeded to walk the next two batters before giving up a massive Grand Slam to Jurickson Profar. 4-0. Jorge Alfaro went back-to-back with a solo homerun off Smith. 5-0. Cleary shaken Smith walked the next batter and was replaced by Corbin Martin. By then the damage was done.

Ha-Seong Kim led off the top of the 4th with a triple. He would go on to score on an Austin Nola sac fly. 6-0. Back-to back wild pitches (seriously???) by Martin in the 5th gifted the Padres another two runs. 8-0. The Padres added 2 more runs in the 6th and the route was on. 10-0. Christian Walker hit a too little too late solo home run in the bottom of the 6th. 10-1. A Drew Ellis RBI single in the bottom of the 9th made it 10-2. That was immediately followed by Cooper Hummel’s first major league hit, a three-run homerun, for a final score of 10-5.

For the third straight year the Diamondbacks start the season 1-3 against the Padres. And this could be their worst team yet. They were a Seth Beer homerun away from being swept. Back-to-back nights they didn’t get their first hit until after the 6th inning. Before the four meaningless runs in the bottom of the 9th today the Diamondbacks had only scored 7 runs total this series.

Diving deeper into the stats shows a bleak picture for Diamondback hitters. David Peralta is the only starter hitting above the Mendoza line (.200 average). Marte, coming off his new extension, is hitting .133. Carson Kelly and Dalton Varsho are hitless through four games. This Diamondbacks team makes me think of Brad Pitt’s line in Moneyball "If he’s a good hitter then why doesn’t he hit?".

Looking ahead the Astros come to Phoenix for a two-game series. The Diamondbacks will then travel to New York to face the Mets. If the entire team doesn’t start hitting soon it could be another long season. While I appreciate the Diamondbacks trying to stay competitive, for the last three years they have not been. Not even close. Maybe this will be the wake up call the front office needs to start a full rebuild?

Who am I kidding? They will sweep the Astros and Mets next week to suck me back in. 159-3 is still possible. GO DBACKS!

Big thanks to Nick for sticking with the severely underwhelming game, as a series which started with so much unexpected promise, petered out into... bleh. Oh, well: at least the Diamondbacks are only half a game back of the Dodgers. So there's that. The Fangraph pretty much sums up the degree of interest I had in this afternoon's proceedings: 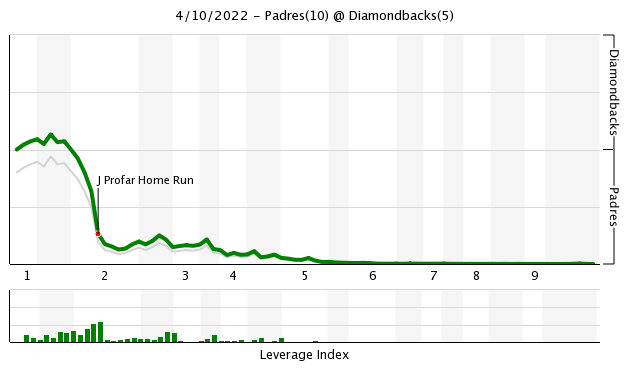 Gerardo Perdomo was the top D-back, our Krakatoa at a whopping +3.4% of win probability. Unsurprisingly, the damp squib was Caleb Smith, whose one-inning outing was -37.8%. Just the one Sedona Red comment - mine about clearly the answer being for the team just to play the ninth inning - so no official comment of the game. But they have scored eight runs in the four ninth innings played so far. Across the other 32 innings. a total of three.

An off-day tomorrow. Not to be confused with the off days on Friday, Saturday and Sunday...