We have the fortune of facing the Brewers the day after they were officially eliminated from the postseason. Unfortunately for us, it’s also the day after yet another bullpen meltdown. So both teams seem a bit deflated coming out of the gate. The crowd, even thinner than last night’s remarkably sparse attendance, isn’t helping.

At least we have Gallen on the mound, with the hope to see yet another great pitching performance. We’d get one, but not exactly how the way we were hoping…

Eric Lauer is pitching for the Brewers. He’s having a good year, like seemingly every Milwaukee starter; their offense is the primary culprit in missing the playoffs this year. Stone Garrett now appears to be the regular leadoff batter against lefties. Probably a better choice than Carson Kelly given his speed. In any case, he first needs to get on, but he swings through a heater down the middle to strike out. Luplow grounds out and McCarthy hits a soft liner for an out for a 1-2-3 first for Lauer.

The Brewers patiently work a series of long at-bats against Gallen, fouling off 13 pitches in the first inning alone. Yelich singles on the 8th pitch of the at-bat, Renfroe strikes out on 6 pitches, Wong walks on 6 pitches, Urías sees 11 pitches before lining out (and his foul balls were hit hard, too), and Hiura strikes out on 5 pitches. That’s 36 pitches to five hitters, over 7 pitches per at-bat. It’s feeling like it’s going to be a long night.

Walker walks on five pitches to lead it off, and Rojas gets ahead in the count 3-1 before flying out to left – he seemed particularly frustrated, slamming his bat down before jogging to first. It’s during this half-inning that we get breaking news that Aaron Judge has hit #62, passing Maris in his penultimate game. Back in our game, Carson Kelly rolls a ground ball straight to the shortstop for an easy double play.

Garrett Mitchell, the 2020 first round pick and Brewers’ center fielder of the future, breaks the pattern of long at-bats by homering just over the right field wall on the first pitch from Gallen. Tyrone Taylor doubles on the next pitch – they’re really not waiting around now. Narváez then flies out to left, unable to advance the runner. Pitching coach Brent Strom chooses this opportunity to visit Gallen, which seemed a little oddly timed to me – maybe they just noticed how he was tipping his pitches or something. It seems to work, as he strikes out both Brosseau and Yelich to end the threat.

Varsho pops out to Wong near the foul line in right. Alcántara walks on five pitches – Lauer’s pitches seem to be sailing on him, away to right-handed hitters. Unfortunately, nothing comes of it as Perdomo flies out to right and Garrett strikes out on a high heater.

Gallen appears to be settling down, getting Renfroe to fly out to Varsho and Wong to ground out to Walker. But then Luis Urías hits a ball above the zone out to left. Hiura strikes out, this time on three pitches. Gallen has been more efficient in the second and third but has given up two homers.

The Dbacks get their first runner in scoring position with two outs after a McCarthy high chopper that Lauer is unable to field and a Rojas walk, interleaved with a Luplow strikeout and Walker foulout. This prompts a mound visit from the pitching coach that also works – Kelly strikes out, stranding the runners.

Mitchell is unable to replicate his home run last at-bat, flying out to Luplow in shallow left-center. Taylor walks on a very close full-count pitch; Gallen seems particularly peeved at the call. Narváez entertains us at his own expense, fouling the first pitch off his leg and then hitting himself in the face with the bat. He eventually pops out to Alcántara at third, and Brosseau gets jammed and hits a fly ball to Luplow in left to end the inning.

Varsho makes another quick out, grounding out to Wong on the second pitch of the at-bat. Alcántara strikes out five pitches, and Perdomo looks silly swinging over the top of an 0-1 slider but Lauer’s pitches get away from him and Perdomo takes the next four pitches for balls to walk. He takes second on a pitch in the dirt to Garrett, but Garrett swings through a couple fastballs, striking out for the third time.

Third time through the order, and Gallen starts the inning with 85 pitches – it’ll almost surely be his last. Yelich is unable to hold up on the 2-2, striking out. Renfroe pops up, Rojas making a nice play down the line in right. Jace Peterson, batting for Kolten Wong, works another walk, taking Zac to 99 pitches. This is his inning, though, as Ian Kennedy is just beginning to warm up. Strom visits Gallen on the mound, this time seemingly to just give Kennedy more time to warm up. This mound visit is much less successful, as Urías lines an RBI double to right-center on the next pitch. Hiura strands the runner though with a grounder to short to finish Gallen’s line for the night after he reaches 102 pitches: 5 IP 5 H 3 ER 3 BB 6 K. Not exactly the ace stuff we’ve come to expect from him, but the game is still in range.

We have some ground to make up if we’re going to get Gallen his 13th win. And the "heart" of our order is up, if you want to include Jordan Luplow in that, as he strikes out on some high heat. That’s 0-6 with 5 strikeouts from Garrett and Luplow at the top of the order, not exactly setting the table. McCarthy fouls off a few pitches, driving up Lauer’s pitch count, before grounding out to Peterson at second. A check-swing cracks Walker’s bat on the handle before he pops up to Renfroe in shallow right-center.

Chorizo wins the sausage race, which according to the broadcast is a major accomplishment given the added weight of the sombrero. In the real game, Ian Kennedy is on to start the 6th, and right away gives up a line drive single to Mitchell on the first pitch. He steals second, but Taylor then strikes out on high heat, Narváez flies out on the first pitch to Luplow in left, and Brosseau hits a high fly ball to center that Varsho tracks down. It’s a scoreless inning by Ian Kennedy!

Lauer still hasn’t allowed a hit, but Counsell pulls him anyways at 97 pitches. His line: 6 IP 0 H 0 ER 4 BB 7 K. His wildness ultimately limited his length due to those four walks, but the Diamondbacks weren’t able to capitalize at all. Predictably, Rojas greets reliever Jake Cousins with a dunk single to center to break up the no-hitter, prompting boos from the sparse crowd. Kelly fouls off a bunch of 2-strike pitches, and Rojas steals second on ball 3. Despite the long at-bat, Kelly pops out to shallow center, unable to advance Rojas. Varsho and Alcántara both strike out to end it, with Alcántara frustratingly not running to first right away when the swinging strike got away from the catcher.

Widener on to pitch to the top of the Brewers order. He gets a generous 2-0 strike call off the outside corner against Yelich and strikes him out swinging on the same pitch later in the sequence. Renfroe hits a couple hard foul balls down the left-field line, on the second of which causes the ball guy to tumble as he goes to field it, before grounding out to short. Peterson hits a grounder off the end of the bat to Alcántara playing in at third for a 1-2-3 inning for Widener.

It’s weird to face the Brewers’ bullpen without Josh Hader looming; the broadcast has mentioned a couple of times how much that midseason trade with the Padres disrupted the clubhouse dynamics, even as he wasn’t his full self. In any case, Cousins is still out there to face Perdomo, who flies out to right. It’s time to bring in the lefties, with Pavin Smith pinch-hitting for Stone Garrett, which also mercifully saves him from a golden sombrero. Pavin works a five-pitch walk, and Corbin Carroll is on to pinch-hit for Jordan Luplow. He hits a high pop-up down the left-field line that Taylor tracks down in foul territory. McCarthy works a full count but strikes out.

Widener is still out there with Ginkel warming up in the bullpen. Urías hits a slow grounder down the third-base line, but with two strikes, Alcántara is playing deep and his bare-handed throw is late and a bit off-line. Hiura pops up on an 0-2 pitch to Rojas in foul ground. Mitchell hits a hard grounder that Walker fields cleanly (alas) and gets the lead runner at second, but they’re unable to turn two with Mitchell’s speed. As Taylor fouls off pitch after pitch, the broadcast gives a lot of screen time to Melancon doing some kind of exercises in the bullpen with what I’d like to imagine is a melon cradled between his pitching arm and his torso. After Mitchell had taken off on a couple of the foul balls, Widener pitches out and Kelly fires down to first but is unable to get Mitchell. Taylor then hits a flare to left-center, sending Mitchell to third for the Brewers’ eighth hit to the Diamondbacks’ one. But Narváez strikes out, sending us to the ninth.

Last night, the Diamondbacks squandered a 3-run lead in the ninth. Will the Brewers return the favor? Strzelecki, whose name seems to be pronounced as if the z is after the first e, is on to close it out for his first career save. Walker pops up the first pitch to Brosseau on the mound. Rojas is up next, and his single back in the seventh is highlighted on the broadcast as the Chas Roberts Cool Play of the Game, which just goes to highlight how slim the pickings are. This time, he works the count full before grounding out to first. This brings up Carson Kelly as the final out, and he grounds out to 2B Peterson on the left side of the infield to close it out.

This was a thoroughly bleh game. At least we weren’t no-hit, thanks to Rojas. Neither would the Phillies, who were held hitless through eight against the Astros, in a game that would have mattered if the Phillies didn’t hold the tiebreaker over the Brewers for that last wildcard slot. With the loss, the Diamondbacks dropped 8 of their last 9 series, the only exception being the two-game split in Houston. The focus now turns to Merrill Kelly’s quest for 200 innings tomorrow. Here’s hoping he can end 2022 on a high note! 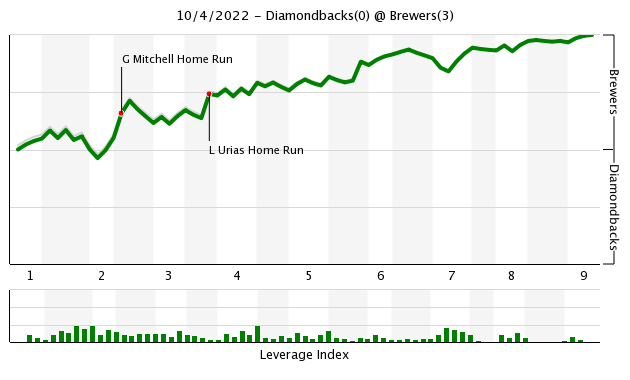 A couple of Sedona Red comments, but one was a GIF and the other was gloomy, so I'm going to go with this one from kilnborn which, if a little late for Meme Monday was at least somewhat optimistic. 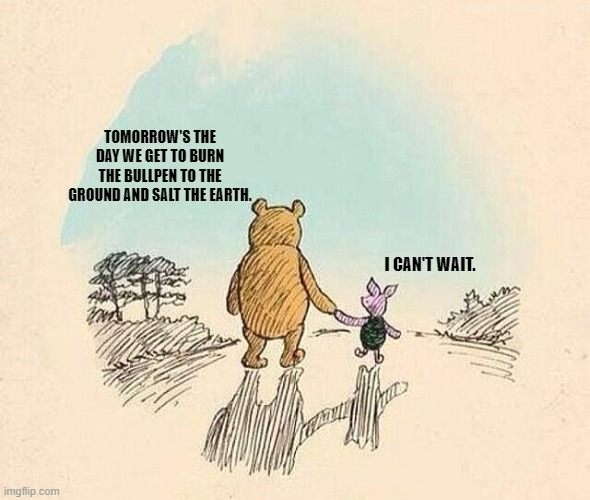 Thanks to samath for the guest recap, and to all the guest recappers this season. We'll see you tomorrow for one final game, with Merrill Kelly seeking to reach 200 innings. A 1:10 pm first pitch there, for the last game of the D-backs season. You'll miss it when it's gone...