TL;DR: Gallen won round two of the Battle of the Zacks, Laz Diaz accordioned the strike zone throughout the game, and the D-Back’s offense couldn’t overcome yet another late collapse from the bullpen to lose 7-6 and squander an excellent opportunity to win another road series against a playoff team.

Josh Rojas struck out looking to lead off the game after taking ball four to begin the theme of grumbling from both sides on Laz Diaz’s flexible strike zone. Ketel Marte also struckout on a ball that was six inches off the plate before Greinke got a single pitch lineout to left from David Peralta to end an uninteresting top of the first.

The Astros took advantage of Gallen missing his spots as he quickly walked Jose Altuve to leadoff the home half of the first. He immediately came back to strikeout Aledmys Diaz, but just as quickly gave up a seeing eye single to Alex Bregman to advance Altuve to second. And just as you thought Gallen might wriggle himself out of the self-created jam, Carlos Correa muscled another missed location into the right field bleachers to make it 3-0 Astros. He finally induced a groundout from Kyle Tucker to mercifully end the first.

Looking to make some noise in response, Kole Calhoun struck a hard hit grounder to the second right fielder (How come they get to have two??) for the first out of the top of the second. Carson Kelly passed the ball directly to Correa off his bat for the second out. Finally, a weak chopper to Greinke ended a lifeless top of the second as the D-Backs seemed to be looking forward to going home after a long road trip.

Gallen continued to struggle with location in the bottom of the second, but blew a fastball by rookie Chas McCormick to start the inning with a strikeout. After failing to put away Jake Meyers himself, Diaz bailed Gallen out with a very generous strike three. Martin Maldonado then popped a lazy fly ball to right field to end a nice, clean inning for an encouraging bounceback by Gallen.

Meanwhile, Christian Walker awkwardly bounced out to second to leadoff the D-Back half of the third inning. Pavin Smith smashed a solo homer to right field that exited the yard in a hurry (1-3 Astros) to break up the perfect game, no-hitter, and shut-out with a single swing. You have to love that kind of efficiency. Josh Vanmeter hit a hard grounder for the second out and Rojas followed with a weak ground ball to Greinke to end the inning. Maybe they were just feeling sleepy after such a long road trip?

Altuve led off the Astros half of the third with a hard hit fly ball to the warning track that Smith awkwardly tracked down. Diaz then looped a long single to left field ahead of Bregman who lifted a hard line drive to center for the second out. Alvarez followed by muscling his own long drive that Smith also tracked down at the warning track to quiet the Astros bats somewhat for another inning.

The D-Backs finally woke up in the fourth despite Marte weakly popping out to Correa to lead off the inning, which induced some noticeable frustration from Marte and myself. Peralta followed with a solid single right up the middle that not even Greinke could catch up to ahead of Kole Calhoun. Calhoun had a great AB and earned a tough walk to make it two on with one out for Carson Kelly. Kelly blooped a single to right field, which Peralta aggressively took advantage of to score from second and trim the lead by another run (2-3 Astros). Var-show snuck a single past Altuve, which Calhoun used to score and tie the game (3-3). The D-Backs weren’t finished either as Walker shot a single to right field that scored two and allowed Walker to take second on the throw home (5-3 D-Backs). Smith shot a line drive to center on a nice swing for the second out, and Vanmeter struck out on yet another egregious third strike to end the offensive surge.

Correa led off the Astros' response with a double that snuck down the left field line into the corner to immediately create a threat after a nice inning for the D-Backs. Tucker shot a leaked fastball into the alley between right and center for an RBI double to immediately answer (5-4 D-Backs).McCormick hit a hard grounder to Rojas who promptly decided to make the inning more interesting by throwing a sloppy throw to Walker who couldn’t handle it and making it first and third with no outs. But the D-Backs defense immediately redeemed itself on a Myers groundout that Tucker inexplicably decided to run on, which allowed Marte to throw home and catch him in a run down. Maldonado weakly grounded out to Gallen to end a down and up inning.

Greinke exited after just four innings and Peter Solomon quickly walked Rojas to lead off the D-Back half of the fifth ahead of Marte who was looking to redeem himself. He immediately shot a single past Altuve and allowed Rojas to aggressively move from first to third. Solomon then airmailed a fastball about 12 feet above the head of Maldonado to allow Marte to move to second before striking out a frustrated Peralta. Calhoun continued his nice game with a dying quail of a line drive that Myers dove to catch, but was driven deep enough to score Rojas (6-4 D-Backs). Finally, a weak infield pop from Kelly ended the top of the fifth.

Not to be outdone by Greinke’s Gold Glove (say that five times fast) defense, Gallen pounced on a swinging bunt from Altuve to lead off the bottom half of the fifth inning for the first out. Correa drove a hard grounder to third that was smothered by Vanmeter who then flipped onto first for a one-pitch out. Bregman tattooed a shot down the line that Vanmeter snagged out of the air to end the fifth. Wow, a clean inning, thanks...Reference point for the uninitiated here.

Solomon induced weak ground balls from Varsho and Walker before a chopper from Smith ended a quick, 1-2-3 half for the D-Backs. They know they don’t have to swing at everything, right? They know that, right? Has anyone checked? I’m just curious.

Gallen came back out for the sixth and started off with a generous third strike against Alvarez after falling behind 3-0. Thank you very much Mr. Diaz! Correa also punched out on a borderline third strike that certainly angered some Astros fans. Maybe they can take out their frustrations on some trash cans? Jose Siri entered as a pinch hitter for Kyle Tucker, which certainly confused my phone - as well as any other iPhone owners within earshot. But he quickly struck out on Gallen’s 103rd - and ultimately final - pitch of the game.

Vanmeter struck out on a "Diaz strike" to lead off the seventh. Rojas earned himself an unlikely walk ahead of Marte. Solomon’s backdoor slider against Marte then slid itself out the backdoor to allow Rojas to advance. However, Marte quickly walked to make the airmailed point moot. Peralta however tailored a DP ball to end any possibility of damage. Sigh.

Luis Frias made his MLB debut in relief of Gallen who had a decent final line (6 IP, 5 H, 4 ER, 1 BB, and 7 K). After rocketing through the minors this year, Frias quickly set down McCormick to start the inning. But he walked Meyers and Moldonado to create a jam for himself ahead of the top of the Astros’ lineup. His first MLB strikeout came from Altuve who looked absolutely silly swinging at a breaking ball in the other batter’s box. Unfortunately, he walked Diaz to load the bases and end his debut with definitively mixed results. Noe Ramirez came in to clean up the mess with a line drive to center field. Phew - let’s limit the excitement, shall we?

Calhoun weakly popped out to shallow left field to lead off the D-Backs half of the eighth inning. Kelly similarly flew out to right ahead of Varsho who forgot he had to swing at strikes and was left numbly staring at strike three. Can we get some caffeine into that dugout?? Or at the very least make sure they get a better night’s sleep??

A disastrous eighth inning started as all such innings do: with a leadoff walk. Brandyn Sittinger entered for the Astros’ eighth and had his worst performance to date in his very young MLB career. After walking Alvarez, he induced a perfect DP ball to short, but Rojas muffed the ball and was limited to only getting the lead runner at second. The miscue immediately came back to bite as Siri crushed the D-Back’s dreams with a massive two-run homer to left field to tie the game (6-6). McCormick followed with a solo homer to make it 7-6 Astros. Meyers popped out to Smith for the second out, but Maldonado lined a solid single to right to end Sittinger’s night. Poppen came in and quickly allowed Altuve to belt a single to center before finally ending the disaster with a strikeout from Diaz.

After the gut-punch that was the eighth inning, Walker quickly struck out swinging at a Diaz strike three to lead off the crucial ninth to make for a 1-4 night. Smith struck out looking at a nasty slider for the second out that he had no business being upset about being called after the strike zone Diaz "established" throughout the game. Finally, Vanmeter faintly swung at a rising fastball to end the game.

I’m not going to lie, this one hurt. It’s never fun to lose obviously, but defensive miscues and ineffective bullpen relief are difficult pills to swallow. All the credit to the Astros for taking advantage of a mediocre team slipping up and allowing the game to slip away though. As my father and I are fond of saying, "Bad teams find ways to lose."

That was certainly the case for the D-Backs this afternoon. After their last score in the top of the fifth inning, they only managed a measly two baserunners for the rest of the game. While six runs should be enough to win most games, it was not enough with the way the bullpen performed tonight - especially the near miss from Frias.

D-Back of the game (or DOG if you will): I will go ahead and nominate Zac Gallen for this game. He had a classic Gallen game: his command slipped in and out, he failed to put batters away after getting ahead in the count, but crucially limited the damage and gave the team some much-needed length before handing it over to the bullpen. 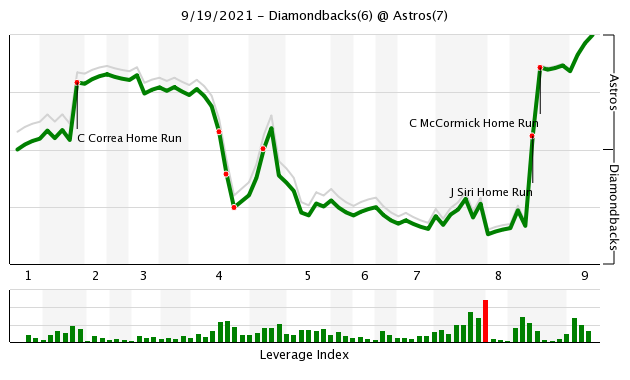 Thanks to Ben for his guest recap. Back home come the Diamomdbacks, for a four-game set against the Braves, which starts tomorrow night at 6:40 pm. Looks like Humberto Mejia starting for Arizona, if mlb.com is to be believed!