One recognized definition of grandeur is, "splendor and impressiveness, especially of appearance or style". All words that could be used in reference to DeLuzio's tool chest when he was drafted in the 3rd round out of high school as a SS/OF: blazing foot speed, respectable glove work, above average bat speed, and arm strength. His selection in that round was made by the Marlins knowing that there were still questions surrounding DeLuzio's mechanics, and a plethora of them at that. However, no matter how many underlying mechanical questions arose among scouts, his speed was never one of them.

Ultimately, Ben elected to go to college, but had the misfortune of struggling on both sides of the ball for his whole college career. Despite his speed garnering comparisons to Deion Sanders, his stock sunk so low at that point that he wound up signing as an undrafted free agent. That same misfortune led to him getting signed by the ill-fated Stewart regime and granted us the opportunity to look at the MiLB numbers of his to highlight any adjustments that may have been made over the course of his career. We'll start with his defense, since we have the least amount of information to go on.

No tables for this one, as anything other than counting stats like OF assists wouldn't be very useful. It's worth noting that questions about his arm were never really too focused on strength/accuracy, they were more about the ability of his arm action to play in the IF. After he had 8 OF assists in 43 games playing RF in A ball as a 22 year old, you wouldn't really be going too far out on a limb in saying that his arm plays on the grass.

It might seem a bit counter intuitive to not talk about errors, but immense speed can grant players the ability to get a glove on balls that slower players would struggle to. Why would you penalize a player for failing on opportunities that others don't even have the ability to create?

And create opportunities he has, winning the AA Hustler of the Year Award in 2018, which also happened to be his return year from an extended injury (maybe a little too much hustle). The reason is undisclosed, but he did spend the final 36 days of the 2017 season and the first 68 days of the 2018 season on the IL. However, anybody that has seen post injury footage of DeLuzio can see that his speed still plays fine in CF. If you haven't, enjoy!

Finally we get to the offensive segment of his profile; as always we'll start with plate discipline to see if there's any change in intent at the plate. Since he's been consistently around league average at every stop, it's probably best to look at years where he's had enough PA for numbers to stabilize. The Rookie ball numbers are there as an abject lesson on the danger (and hilarity) of small sample sizes. We'll start by looking at 2016 A-; while he may not have been age appropriate, that was the season that he went undrafted and signed.

It doesn't look that bad! Honestly, looking at that A- ball line you wouldn't be able to tell that he wasn't drafted. The 2017 season shows a decline in almost every metric here, but it's encouraging that the jump from A to A+ (the first time he was age appropriate for a level) had him seeing more pitches per PA while maintaining the same K%. Keeping in mind the injury mentioned earlier, he was assigned to AA following a rehab assignment and had a much more patient profile upon his return. Gains that not only carried over to his next appearance at AA, but actually improved (sans Pi/PA and SwStr%). Even after making the move to AAA he maintained his BB% but traded for more swings and more misses. Which he did again after the 2020 layoff, just with fewer misses this time. Why is he swinging more, missing more, still seeing a similar number of pitches, and still performing around league average? Indirectly, it's speed; his batted ball data should paint a pretty clear picture.

Holy BABIP Batman! He was hazing those poor kids in Rookie Ball. The conversation about his promotion probably went something like, "We need to move this guy up, this isn't doing anybody any good." Aside from the ridiculous BABIP numbers jumping off the page, the GB% column makes it easy to believe that this is a guy that was content to pull a groundball and dare the defense to get him out.

That was until his 2019 AA season, when he started hitting flyballs 36.6% of the time (no other large sample was remotely close). Almost not surprisingly, he hit above league average with a career low BABIP. After his promotion to AAA that same season, he gave up small percentages of GB%/FB% that all went to his LD%.

This all leads us to his most recent (on going) campaign, and he's given up even more groundballs that have mostly moved to the line drive bucket. His .483 BABIP from 2019? A Reno-induced fever dream. The .356 BABIP (as of this writing)? Much more sustainable. All of the factors discussed so far point towards a concentrated effort on DeLuzio's part to swing more and try to hit it square or in the air. As far as placement goes, he still tries to pull the ball, but has demonstrated a small tendency towards the opposite field in some seasons.

Any talk about contact that includes speed should have at least a mention of bunting, but there really aren't any reliable numbers for MiLB data. The author refuses to believe that DeLuzio has only attempted 3 sacrifice hits in his career; it's interesting that a sacrifice hit is only classified as such when an out is made or when not bunting to hit, but without BUH% or another metric we can't reliably deduce that it's a skill. However, we have a few numbers to consider for contact quality on the other end.

His early career power numbers were pretty bleak; not quite nonexistent, but definitely not where you'd like them to be. It was mentioned at the beginning of the article that Ben's bat speed was never in question, but there were still questions surrounding his bat. Chief among those concerns was a mechanical disconnect between his upper and lower body that really put a damper on his power projection, and extended injuries aren't exactly conducive to getting into the swing of things.

Before his layoff, the only time we see a sliver of power potential is when he's at A ball and old for the level. After the injury, he almost immediately has power peripherals that are close to that season's, and at an age appropriate level to boot. Each subsequent stop has shown improvements in almost every area, so it's easy to conclude that Ben does what he wants, and Ben decided he wanted to try his hand at slugging when he got to AAA.

People shout, "Everybody slugs at AAA!", and while that is a true statement to an extent, not all ISOs are created equally. It's encouraging to see that he's hitting HRs more frequently, but Ben doesn't hit a lot of HRs; what Ben DOES do is try to hit the ball on a line, dare the defense to get him out, and create opportunities. Five of his fifteen extra base hits this season are triples, and that's in 38 games (again, all as of writing). Here are two lovely graphics: one that is of his career hits through 2019 and the other that is 2019's hits alone. There's sadly no 2021 data yet. 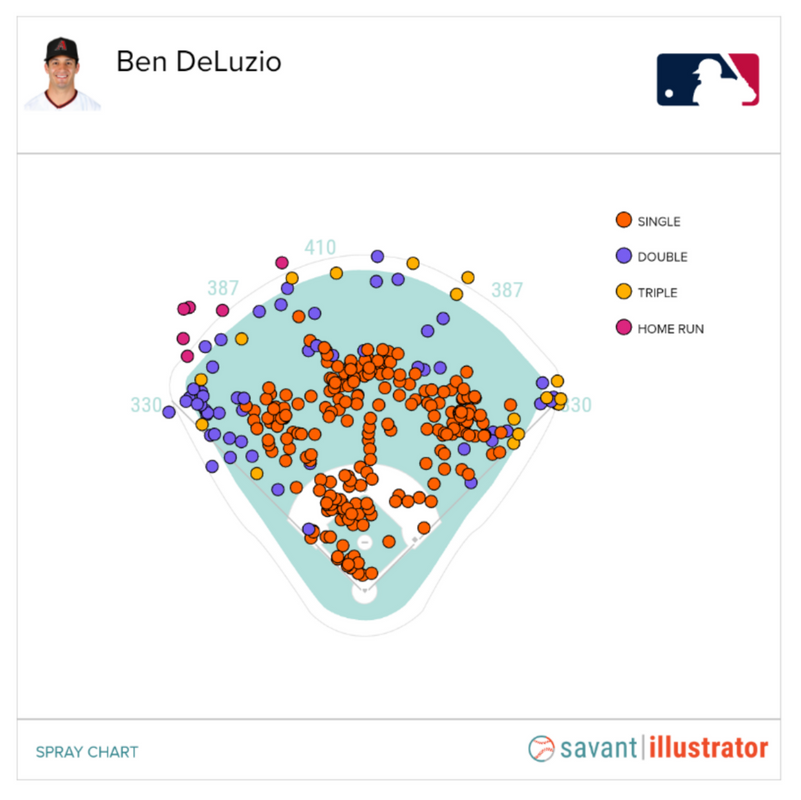 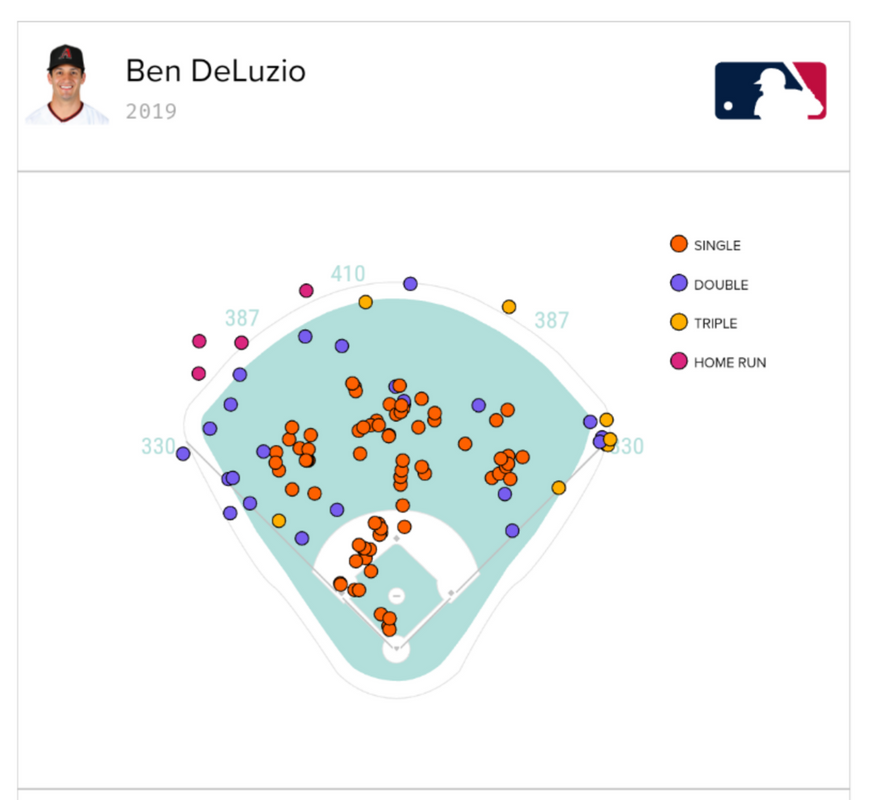 There the bunts are! Even some as recently as 2019, and that slight opposite field tendency? That's quite a bit of yellow down in that right field corner, also in 2019. There's also some fairly shallow blue in there, and everybody loves a good hustle double. It also has to be pretty comforting knowing that if you hit a double really well, there's a good chance it's a triple; and if you hit a HR poorly, there's a good chance it's a triple. Nobody would blame one for thinking that his speed is a finely honed weapon to be used at the behest of his manager.

Anybody with that thought would only be partially correct, though, a career SB% near 75% with most of his success coming against lower level competition is not particularly rosy. On a positive note, he's only hit into 10 double plays in his entire career. For better or worse he's an incredibly aggressive baserunner in all facets, and fortunately not all baserunning value comes from stolen bases.

There are unfortunately no MiLB numbers for UBR (Ultimate Baserunning), but the spray charts have already shown multiple instances in which he's ran hard for extra bases; and a distinct possibility exists that his speed's influence also extends to every part of his game. A separate possibility also exists that something will click once Dave McKay introduces Ben to his stopwatch.

A large number of these small developments happened around the post injury timeframe, particularly the increases in swings, misses, and power; incremental improvements that have exploded to the tune of unconventional power, even by Reno's standards.

If called up there's a good chance that he could fit in with a speed/CF glove combo, an increasingly appealing option in light of recent events. On top of that, he looks like he wouldn't be completely out of his element in platoon PAs as a backup OF right now (currently running reverse splits, which is worth keeping an eye on). All told, it looks like DeLuzio is starting to emphatically answer scouts' questions with increasing frequency, and the excellent consistency of his speed has been a crucial component.