Today's pitching matchup is between Madison Bumgarner and Ranger Suarez. He pitched against us on August 18th against Castellanos, giving up 3 runs on 8 hits in 4.2 innings. Suarez' next time out against the Rays he pitched 6.1 innings and gave up 1 run on 6 hits while striking out 7.He had a no decision as Archie Bradley gave up 2 runs and the Phillies lost 3-1.

75* and 74% humidity in Philly. Forecast is partly cloudy.
Ahmed, the first pitch of the game is low in the dirt, eventually striking out. Marte first pitch hacking silo hr pop up to 1B. Rojas grounds it back up the middle to Suarez. Quick inning.

Segura leads off with a base hit in front of McCarthy in RF. Full count to Realmuto, foul left side, walked him inside on a 90mph fastball. Harper sac bunts...a sentence I thought I would never write. Another full count to McCutchen and he singles to LF. Bumgarner does not have command right now. Jorge Bonifacio, brother of former Dback Emilio, goes 3-0 and he walks on a pitch inside. MadBum has thrown 25 pitches and gotten 1 out and loaded the bases so far. Galvis flies out to Marte and the run scores. Runners on the corners. Torreyes flies out to RF.

Carson dumps one into center. Walker flies out to Harper. Young grounds one past Galvis, 2 on 1 out might have something going. Ellis flies out to McCutchen on a 2-1 pitch. Here is McCarthy, looking for his first MLB hit. Now would be a nice time. On a 2-2 pitch he gets jammed a bit, but it drops in between Realmuto and Harper! One run is in and the hit is scored a double for McCarthy's first hit! [Pictured, top] Bumgarner will strike out to end the frame.

Marchan GO4-3. Suarez strikes out. Segura shows bunt on the first offering, and does it again, then flies out to RF.

Ahmed flies out to CF for the first out. Marte grounds out to Galvis. Rojas lines one down the LF line, but foul, then goes the other way and grounds the ball past Segura in between 1B and 2B. Kelly batting, Suarez paying alot of attention to Rojas at 1B, Kelly flies out to Harper in foul ground.

Realmuto lines one into the LF corner, Rojas does a good job of cutting it off and gets it in quickly. Realmuto was assuming it would be a double and was way out in no mans land and gets into a little bit of a run down with Young and Walker. Full count to Harper, strikes out. Full count to McCutchen, he walks. Bonifacio strikes out on 3 pitches, MadBum gets him to chase up and away.

Walker strikes out on a check swing. Broadcast has spent 5 minutes on one guy stuffing his face. This isn't an eating competition. Young and then McCarthy ground out.

Galvis 3-2 count, flies out to right. 70 pitches for MadBum now. Torreyes beats one off the chalk and Kelly is there to get it. Torreyes assumed it was foul, just stood there and let Kelly tag him. Marchan then singles on the first pitch. Then Suarez grounds out to Walker to end it. Bumgarner looking much better out there than the first inning that is for sure.

Bumgarner works the count full, fouls two off, before striking out. Ahmed GO5-3. Suarez at 79 pitches. Marte singles past 3B Torreyes, on a pitch that was on the bottom of the strike zone and likely a ball. Reminded me of Vlad Guerrero Sr. Rojas grounds out to Segura.

Segura single into CF on the first pitch. Realmuto, another full count, 5 on the day flies out to Rojas. Harper singles to RF, Segura to 2B. McCutchen, has 9 double plays on the year, so now would be a good time for a tenth. He walks. Bonifacio grounds out to Walker and Segura scores to make it 3-1. Galvis singles to CF and scores both of the runs, he has 3 rbi this afternoon. The bullpen is quiet right now. Torreyes grounds out into a FC6-4.

Brad Miller in the game at 1B now for Realmuto. Realmuto had to come out of the game due to left ankle soreness. Wonder if he did it on that play earlier when he assumed a double and got caught in a run down. Noe Ramirez will warm up in our bullpen as Kelly strikes out. 3-0 to Christian Walker who takes it and then fouls one off. Walked him. Girardi will pull Suarez and go to JD Hammer. Let's see if he nails it down. Young hits one to RF and Harper has it on the warning track. Now the trainer is out and talking to Hammer. I don't know what that was about. Hammer stays in. Ellis pops it up to 1B.

Noe Ramirez is now our pitcher. Per Jack in the GDT Bumgarner now 4.37 ERA/ 4.24 FIP / 4.79 xFIP in 117 IP Marchan grounds out to Ellis. Odubel Herrera pinch hits for their pitcher's spot, singles to LF on the 7th pitch of the AB. Segura flies out to CF. Herrera will steal 2B. Then Miller grounded out into the shift.

Connor Bragdon on the mound. McCarthy strikes out. Pavin PH for Noe. Pavin doubles to right-center. Ahmed doubles to left-center! Smith scores and it is now 5-2 Phillies. Bradley starts to warm up in their pen. Pitching coach out to talk about what they want to do with Marte. 2-0 and then 3-0 to Marte he takes a low and questionable strike. Ball 4. Rojas grounds out to Segura and both runners advance. Carson Kelly with runners on 2B and 3B and 2 out. He pops up to Galvis.

Well, I finished off my bag of peanuts and the nachos I made. Time for a beer.

Jake Faria on to pitch. Harper to greet him and doubles down the RF line. McCutchen flies out to Marte, and Harper advances to 3B. Bonifacio flies out to McCarthy, grabs it, the throw home and gets Bryce Harper by a good 10 feet! We get out of it unscathed.

Travis Jankowski will replace Bonifacio in CF and Bradley on to pitch for the Phillies. Walker strikes out. Young grounds in-between 1B and 2B, Miller ranges way to far off 1B and Bradley barely gets to the bag to get the throw from Segura. Peralta pinch hitting for Ellis singles. McCarthy singles past Miller. 2 on, 2 out. Van Meter pinch hitting for the pitcher's spot. Full count, walks, he threw 4 straight changeups and there was miscommunication with his catcher a couple times. Nick Ahmed, bases loaded. Ive always wondered if having been teammates with a guy for a long time might help out. I know the signs change, etc but still. Ahmed singles through the hole at SS and McCarthy and Peralta score! Seemed to be the matchup Archie was wanting and Ahmed made him pay. It is now 5-4. Hector Neris on to pitch. Marte, with 2 on, flies out to Harper.

Peralta remains in the game in LF, Rojas goes to 3B and Joe Mantiply is now our pitcher. Galvis reaches on an error by Rojas. Torreyes grounds to 2B. Marchan hits it to CF, Marte tries to make a sliding catch and misses it. Marchan is in with a triple. Jankowski now hits a grounder down the RF line in the corner, McCarthy isnt anywhere near and Jankowski is in with another triple. We scored two and then gave it right back. IBB for Segura. MIller flies out to Peralta no one advances. Harper grounds out to Rojas.

IPK now on with a 7-4 lead. Josh Rojas strikes out. Kelly lines out to McCutchen. Walker strikes out. IPK needed 9 pitches to slam the door.

At least this was an entertaining game. 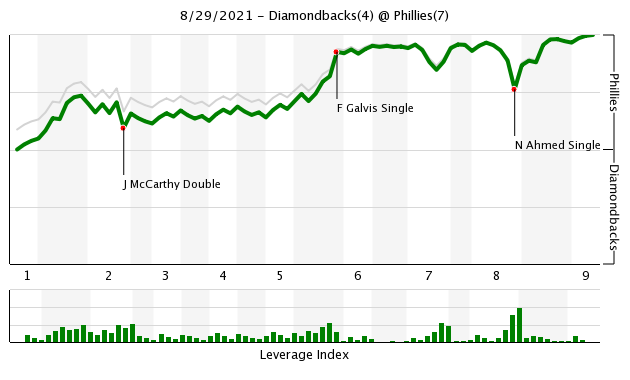 [Ed. That's quite enough French surrealists] Falling behind in the first is never a good thing, in terms of an active Gameday Thread, but we did end at almost 150 comments. Taking part were: Augdogs, AzDbackfanInDc, DBacksEurope, GuruB, Jack Sommers, Jim McLennan, Justin27, Makakilo, MrMrrbi, NikT77, Oldenschoole, Snake_Bitten, VW Beetle, edbigghead, kilnborn and since_98. Justin didn't pick a CotD, but there was just one Sedona Red comment, so it's an easy pick: the return of MrMrrbi:

Thanks to Justin27 for his detailed recap, and that ends the road-trip, with the Diamondbacks now flying back to Arizona. Tomorrow, they face the Padres, with first pitch at 6:40 pm, and I think it's Tyler Gilbert starting for the D-backs.