The DBacks scored big and in unexpected ways to win today in Denver, avoiding a sweep by the Rockies.

Like many Dbacks fans, to avoid disappointment, my expectations have fallen so low that they're somewhere near the Earth's molten core. The Dbacks' seven-year "rebuilding" effort has been a cruel charade, just something the Dbacks head shed tells us every year to quell our dismay when yet another favorite player is traded away. I don't know about y'all, but I'm afraid to buy anything at the Team Shop with a player's name on it. The closest I've gotten is "Bring in the Beard." The very groovy Serpientes regional uniform debuted on June 16. Before the end of July, Escobar, one of three players featured in the Serpientes launch, became a Brewer.

If you love something, set it free . . . and it return in an opposing team's starting lineup.

TOP OF THE FIRST

Rockies' starting pitcher Jon Gray lost in his last three starts, which gave me a scintilla of hope, but our offense was kept scoreless this inning.

BOTTOM OF THE FIRST:

Starting Dbacks pitcher Taylor Widener promptly launched a ball into the elbow guard of Rockies' lead-off batter Conor Joe, who scored when Ryan McMahon doubled. Widener ultimately held the Rockies to one run, the only run Widener would give up. The best defensive moment for the DBacks was an outstanding running catch by Ketel Marte. Score 0-1.

TOP OF THE SECOND

This is when the Dbacks' offense started cooking. Players other than the usual suspects put the Diamondbacks on the board. Josh VanMeter singled, then Drew Ellis hit deep into right center field for a double. Instead of leaving runners stranded on base, as has become a Dbacks custom this season, Dalton Varsho hit a 3-run homer, his 2nd homer in 2 consecutive games. That's 11 since his Major League debut 7/30/20. Score 3-1.

Other remarkable bits this inning:

Taylor Widener batted for himself and got his first base hit, a line drive through left center.

Rojas hit a ball right into his own ankle. Ouch! Rojas hopped about a bit, courageously went back into the batter's box, and struck out. But I still admire his stoicism.

BOTTOM OF THE SECOND.

Marte catches yet another seemingly impossible-to-reach fly ball to end the inning.

TOP OF THE THIRD:

The Dbacks are quickly dispatched, with but a single single by David Peralta.

BOTTOM OF THE THIRD:

Widener walked McMahon, the Rockies' hero of the first inning, when the next Rocky up was big bat Trevor Story. While we held our collective breath, Widener struck him out.

TOP OF THE FOURTH

'Don't think, son. It will only hurt the team."

BOTTOM OF THE FOURTH

I'm pretty sick of hearing SteveBob or Torey Lovullo say a pitcher is having "trouble getting the ball over the plate." As euphemisms go, that one is slightly less harsh than saying, "You have only one job, son." So it was very satisfying when Widener closed out that inning giving up zero hits and zero runs.

TOP OF THE FIFTH

A quick three outs for the DBacks. Marte flied out. Pavin Smith flied out. Walker struck out. Walker's day overall was not great.

Widener is still pitching, despite SteveBob's comment that Widener looked tired. Widener must have downed a double expresso, because , while he walked the first batter again, he still held the Rockies to zero hits and zero runs for the inning.

This was one of those innings that we all hope to see live, an inning that makes a game something special.

Peralta flies out, but Gray walks the next two Dbacks.

Gilbreth walks two more Dbacks, walking in Josh VanMeter for a run. Dbacks are up 4-1.

Gilbreth is replaced on the mound by Robert Stephenson.

Stephenson walks Marte, thus walking in Ellis to score. Dback are up 5-2.

Pavin Smith puts the Rockies out of their misery by striking out, thus ending the "Walkapalooza."

Twice this inning the umpire made two dreadful calls, calling obvious balls strikes. Bad Call One was redeemed by a walk for Varsho. Ditto for Bad Call Two and Marte.

The Dbacks are ahead 5-1. SteveBob calls the inning "walking for tacos."

DIGRESSION: I've been wondering: Does any fan actually go out and get those free Taco Bell tacos or Jumbo Jacks within the time set for doing so, between 3:00 and 5:00 in the afternoon within a week of the summer solstice? People with ballpark beer hangovers need those tacos before noon.

BOTTOM OF THE SIXTH

After a very good showing by Widener despite some ups and downs, Caleb Smith replaces Widener. A steadfast Dbacks fan expects the game to go way far south after the starting pitcher is relieved.

Despite being thrown out of the previous game for having an alleged illicit sticky substance on his glove, Caleb's ten day suspension is itself suspended while MLB analyzes the substance.

SteveBob call for one MLB approved sticky substance all pitchers cans use. Bizarre.

Suggestion: The team of the accused pitcher should be given a sample of the substance MLB is analyzing so the team can conduct independent testing. Every criminal defendant in a case involving the analysis of a substance is entitled to have his own expert examine the substance.

TOP OF THE SEVENTH

Josh VanMeter hit what looked like a killer line drive, but Cron made an amazing catch.

Ellis pops up and out.

BOTTOM OF THE SEVENTH

Another zero hits, zero runs for the Rockies offense.

TOP OF THE EIGHTH

Varsho hits a leadoff double into the right field corner.

Caleb Smith grounds out, then Rojas lines out, advancing Varsho to third.

Pavin Smith singles into left field for an RBI as Varsho scores, making the score 7-1.

BOTTOM OF THE EIGHTH

Now Caleb Smith really is tired. After a walk followed by two base hits and a run, Caleb is replaced by Taylor Clarke.

The Rockies score once more making the score 7-3.

TOP OF THE NINTH:

Peralta leads off with a double. The next two DBacks strike out, then Varsho hits a triple and Peralta scores . Dbacks lead 8-3.

BOTTOM OF THE NINTH:

T. Clippard is now pitching for the Dbacks.

CR Dom Nuńez triples, then scores after Conor Joe doubles, but the Rockies can't catch up with the Dbacks.

This game was unusual in several respects. The bullpen did not snatch defeat from the jaws of victory. We led from the second inning on. We avoided a sweep on the road against a team that rarely loses at home.

Many things went very right. I should be happy, but I am as yet unable to shake off the anhedonia brought on by all the record lows attained by the DBacks this season. It will take a few more wins to lift me out of these Dback Blues.

Here's the post-game audio from Taylor Widener, Daulton Varsho and Torey Lovullo. Looks like it will be Humberto Meija making his Diamondbacks' debut in Pittsburgh. He'll become the 59th different player used by the team this year. 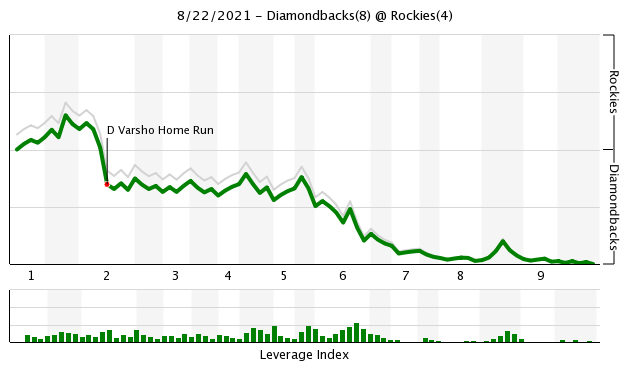 Just over 400 comments, not bad for a Sunday. Present were: AzDbackfanInDc, GuruB, Jack Sommers, Jim McLennan, Makakilo, Michael McDermott, NikT77, Oldenschoole, Snacks&Dbacks, Snake_Bitten, blue_bulldog, edbigghead, kilnborn and since_98. No surprises as to the Comment of the Thread. I'd have picked this even if nobody had rec'd it. :) But the tribe has spoken, DC... 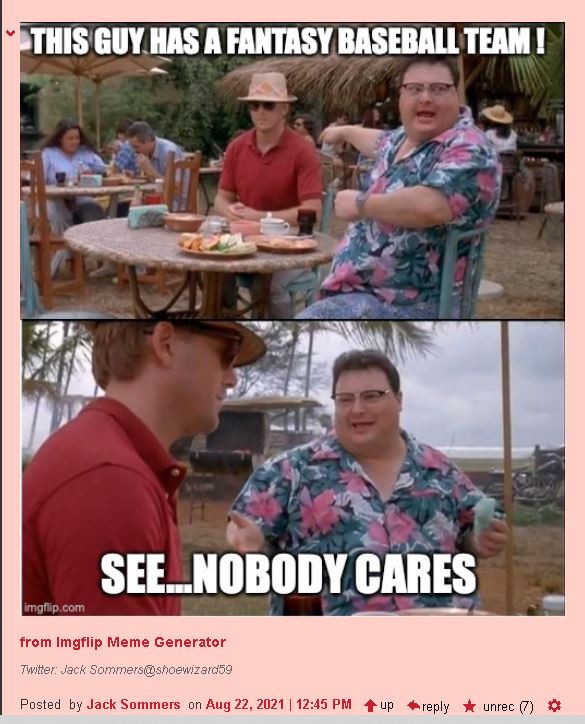 Having avoided the sweep, the D-backs head on to Pittsburgh, which might be their best chance of a road series victory the rest of the way, since every other series away from Chase is against a team above .500. First pitch is at 4:05 pm.