TL;DR: The starting pitching was inconsistent, the bullpen imploded late in the game, and the offense failed to capitalize while Tatis continued to show why he's such an important player to the San Diego Padres in a maddening, forgettable game for the Diamondbacks.

There are games in every sports fan's life they will remember forever: an impossible catch in football, an odds-defying basket in basketball, or a gravity-defying goal in soccer *ahem* football. Last night was one of those moments. In case you happened to be under a rock yesterday, Tyler Gilbert accomplished the incredible: pitching a no-hitter in his first MLB start. You can get the entire beercap here.

So if you were hungover today after drinking a little too heavily from the keg of glory last night, you'd be forgiven for missing today's game to instead bask in the bright, shining moment Tyler Gilbert gave us in this dumpster fire of a D-Backs season.

Zac Gallen continued his recent struggles with command that seemed to drift in and out during every inning. In his five innings pitched, he did not manage to have a single clean inning and ended his day with a line of 5.0 IP, 8 H, 4 R, 4 ER, 3 BB, 5 K. While it certainly wasn't his worst outing of the year, he still has a lot to prove before he can be counted on to be a steady starting option in the next window of contention for the Diamondbacks. Additionally, it's become clear that Zac Gallen version 2020 was a fluke rather than an indicator he was ready to become a stable member of the starting rotation.

Regardless, the inability of the Diamondbacks to meaningfully take advantage of scoring opportunities and Fernando Tatis Jr's return to action off the IL were undoubtedly the major storylines of the game. The Tatis versus Gallen Saga - Act One included absolutely ripping Gallen's fourth pitch of the game down the line for a double to lead off the game. There goes the no-hitter. Although Gallen managed to strand both Tatis and Machado after a walk to the latter, it was a stressful beginning and a harbinger for the rest of the game.

Meanwhile, the Diamondbacks managed to get a two out rally going in their half of the first inning before David Peralta got the green light on a 3-0 pitch for a routine fly ball to Tatis who was making his very first start in the outfield in his career. Sigh. Here's hoping that doesn't come back to haunt us. Narrator: It did.

Not much happened for either team in the second despite Gallen doing his level best to turn a swinging bunt single into a double with a throw off the first base line. Sometimes NOT throwing is the better play, sir.

Act Two of the Tatis Saga (coming to theaters Summer 2024 from Disney) came quickly in the third as he absolutely unloaded on a hanging breaking ball to give the Padres a 1-0 lead. His shoulder certainly looks fine to me! We have to give Gallen credit though as he got the next three batters to strikeout, groundout, and strikeout.

The Dbacks finally came alive in their half of the third with a solid single from Rojas ahead of a smoked linedrive triple down the right field line from Ketel Marte that tied the game at 1. Unfortunately, the DBacks got some bad luck when Cabrera tattooed a ball right back to relief pitcher Reiss Knehr who deflected it with a barehand (OUCH). The ball then hung up just long enough for Cronenworth to make a diving catch and eventually strand Marte at third.

Even better, Marte's excellent play wasn't finished as he started the visiting half of the fourth making a fantastic play on a sinking liner from Tommy Pham that had only a 20% probability of a catch according to StatCast. This Marte guy might just be all right folks!

After relatively little action after a Hosmer double, an infield single from Pavin Smith, and a walk from Nick Ahmed, it was time for the final act in the Tatis vs Gallen saga. Now, I never played baseball above the high school level, but even I know that pitching a third time to a guy who's already hit a double and a home run off you probably isn't the best idea. Instead, Tatis decided to prove the axiom and promptly hit another solo home run to make it 2-1 San Diego.

Adam Frazier followed by knocking a solid single up the middle before Cronenworth snuck a two-run homer over the right field fence to make it 4-1 San Diego. Double Sigh. Pham for his part hit a solid single right back up the middle before Rojas did his best bicycle kick impression to give Pham an extra base. Hosmer then walked before Caratini complied with a tailor-made DP ball.

In the bottom half of the fifth inning, Rojas wanted to make up for his bicycle kick mishap and took just the second pitch from the newly entered reliever Pierce Johnson behind the right field fence to tighten up the game 4-2, but there was nothing doing afterwards though.

Both teams struggled to make much noise in the sixth outside of a nifty pickoff play from Brett de Geus coming in for relief of Gallen as the Diamondbacks squandered a nice leadoff single from Peralta with a strikeout, groundout, and flyout. Luckily, the Padres continued to make much happen in their half of the seventh either as a walk to Cronenworth was quickly erased in an inning ending double play.

After VanMeter quickly struckout in place of relief pitcher Wendelken to lead off the Diamondback seventh, Rojas struck a nice double to improve his season slash line to .275/.362/.811. That'll do very nicely for a leadoff hitter. He advanced to third on a fielder's choice, but was stranded again when Cabrera weakly popped out to right.

And finally, we arrive at the eighth inning where the ugliness of the Diamondback bullpen again reared its ugly head. After newly called up Miguel Aguilar got Hosmer to line out to center, he gave up back to back singles to Caratini and Grisham before giving way to Sean Poppen who promptly - walked the pinch hitter to load the bases, gave up a two-run single to Tatis, walked the bases loaded AGAIN, walked in a run, and allowed another run to score on a wild pitch. Triple Sigh.

The next inning and a half went quickly as I assume the Diamondback players were looking forward to a well-deserved shower and we arrived at our final score of 8-2 San Diego. Even still, taking three out four against one of the best teams in the NL was manna from heaven even if today's result decidedly wasn't.

So here's looking at you Tyler Gilbert. At least we'll always have August 14th, 2021. And we can all collectively forget The Hangover Game. 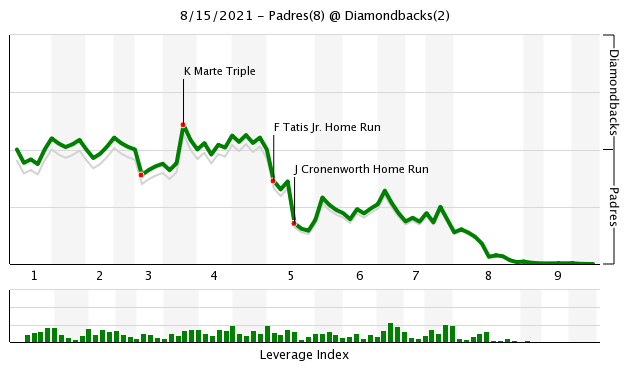 Thanks to mcbenseigs for his sterling work on the recap - meaning I didn't have to watch this swag show! Still, taking three of four is not bad for the D-backs, and we'll always have Saturday... An off-day for the team tomorrow, as they await the arrival of the hot Phillies, for a three-game series which begins on Tuesday.