Today's pitching matchup is a repeat of the game on April 17th in Washington where the Nationals won 6-2. Erick Fedde went 5 innings giving up 1 run and striking out 9 batters. Luke Weaver went 4 innings and gave up 8 hits and 4 runs. Oh, should I mention this was the game that Locastro got injured and his MLB record steals streak to begin a career ended? Let's hope this one turns out better...

First inning
First pitch from Weaver to Trea Turner is a ball on the inside and the next pitch he misses away. Turner pops it up to Escobar for the first out of the game. Soto now, I think I will always remember him for his swaying back and forth against Greinke in the 2019 World Series...before ZG pitched him up and in. He grounds it into the shift, to Ahmed. Ryan Zimmerman, who was the Nationals first pick in the first "Washington Nationals" draft (2005). Strikes out swinging.

Pavin Smith strikes out and then Josh Rojas hits a bullet into RF for a single. Escobar grounds out to Castro on the overshift (he is playing 3B but that was over by 2B). Peralta grounds out to 2B to end it.

Second inning
Schwarber excuse me swing rolls it to Escobar playing 2B because of the shift. Ahmed was the only player on the entire left side...and he was only 15 feet from the 2B bag. Weaver strikes out Starlin Castro on a pitch away. He has looked food. Alex Avila in his first PA back at Chase, batting a robust .174 on the year, grounds out to 2B.

Vogt drives it to left-center, for a double, thought it was a homer off the bat. Leyba flies out to CF, Vogt can't advance. Ahmed 6-3. Marte will play a rehab game in Reno tomorrow. Locastro grounds out to 3B, stranding the leadoff double.

Third inning
Mercer grounds out to Ahmed. Fedde strikes out. Robles walks. Robles stole 2B, Weaver had thrown over a couple of time. Long at bat by Turner, he hits an infield single up the middle. It was pretty close. So runners on the corners, with 2 out for Soto. Soto walks to load it. Zimmerman pops it up to SS.

Luke "dont call me Jeff" Weaver grounds out to their SS. Pavin Smith with a 3-0 count now, taking all the way for a strike, walks on the next pitch. Rojas hits one to the warning track in RF for the second out. Escobar gets a base hit to LF, shift was on so he did a good job of beating it. Peralta strikes out.

Fourth inning
Schwarber first pitch hacking flies out to CF. Castro flies out to Rojas in RF. Avila 3-1, fouls one off, weakly grounds out to 1B.

Vogt flies out to LF. Leyba grounded out to 2B. Alex Young is warming up. 68 pitches for Weaver. Ahmed grounds out. Someone in GDT says it seems Weaver is being pulled due to injury, but whatever it is it does not seem serious.

Fifth inning
Alex Young in the game now for us. Maybe the injury thing is wrong, the cameras caught Vogt and Weaver talking with Weaver's bag packed and no trainer attending him. His first batter, Mercer grounds out to Ahmed. Bert and Bob suggesting it Weaver may have been lifted due to contact tracing protocols. The not being attended by a trainer thing is odd. Alex Young takes the opposing pitcher to 3-0 before getting him to ground out to Escobar on 3-2. Robles strikes out.

Locastro lines out to 2B. Alex Young strikes out on 5 pitches, but it was pretty obvious it was "stand up there and make him waste some pitches and don't swing." Pavin grounds out to 2B to end it. Still no score.

Sixth inning
Turner grounds it past Ahmed for a single. Soto grounds into a 5-6-3 double play, but the shift was on so it was a little weird. Zimmerman grounds out to Ahmed deep in the hole by 2B for the final out.

Fedde still in for the Nats. Rojas grounds out to Turner, 8 in a row retired by Fedde. Escobar grounds 4-3. Peralta strikes out.

Seventh inning
Soria in the game. Schwarber lines one to CF, Escobar leaps for it and Leyba dives for it, good effort but it falls in front of Locastro in CF. Schawrber tried to go to 2B, but got back to 1B safely. Castro strikes out. Schwarber steals 2B, no throw. Avila flies out to LF. Mercer strikes out on a high fastball.

Fedde still out there, 86 pitches for him. Vogt, 3-2 count, walks. Leyba grounds into a 4-6-3 double play. Double barreled action in the Nats bullpen as Nick Ahmed grounds out to his counterpart.

Eighth inning
Both teams have 3 hits, and no runs. Crichton in the game, Heath comes in to play CF, Locastro to RF and Rojas goes to 2B to replace Leyba.

Yadiel Hernandez pinch hitting hits a HR that is just inside the pole above the Dbacks bullpen in LF. Robles hits the ball to deep CF, off Heath's glove and Robles in to 2B. Turner doubles to LF, Robles scores and i tis 2-0 Nationals. Soto grounds out to Pavin for the first out, Turner to 3B. Zimmerman takes a generous inside strike for his first pitch, tapper to the pitcher, throws to Vogt a little bit of a run down, but Turner is called out for leaving the baseline. Zimmerman to 2B. They are saying Weaver was removed due to right shoulder discomfort. Schwarber singles to CF, 3-0 Nationals. Starlin Castro grounds out to Escobar to mercifully end it.

Daniel Hudson now in for the Nationals. Locastro pops up to Zimmerman. Heath struck out. Pavin singled. Josh Rojas strikes out and slams is bat on home plate in frustration.

Ninth inning
Ginkel on to pitch. Avila strikes out and Mercer flies out to Ahmed. Andrew Stevenson pinch hitting, hits an infield single. During the Robles at bat, Stevenson is CS to end it.

Brad Hand in the game for the Nationals. Escobar to lead things off and strikes out. We have 7 Ks in this game, but for some reason I totally thought it was 10 or 11. Peralta pops it up to Turner. Vogt strikes out to end the ballgame. 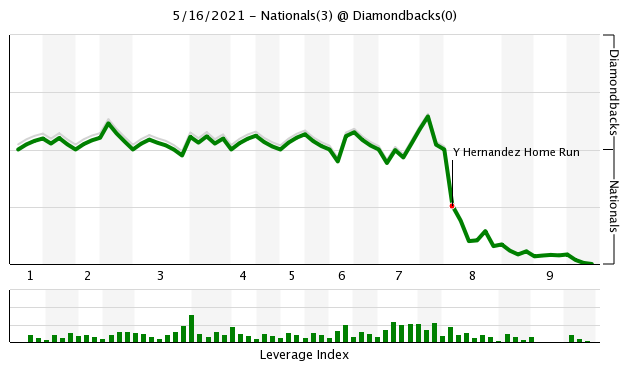 Present in the Gameday Thread were: AzDbackfanInDc, AzRattler, DORRITO, GuruB, Jack Sommers, James Attwood, Justin27, Makakilo, Michael McDermott, MrMrrbi, NikT77, Preston Salisbury, Smurf1000, Snake_Bitten, edbigghead, gzimmerm, kilnborn and makattack71. But nothing got more than two recs, so no Comment of the Game. The D-backs will now head off to Los Angeles for their first series of the year against "those" people. That'll be fun. Thanks to Justin27 for his guest recap: at least this was over quickly!

Post-game comments from Torey Lovullo and Luke Weaver [via Jack]

According to Torey, Luke Weaver said he felt like he had a Charlie Horse to describe the feeling in his shoulder. He'll be getting an MRI tomorrow and they'll evaluate over the next 24-48 hours. There is no way to say how serious at this moment. Torey said that they always encourage the athletes to speak up and don't hide injuries, and that is why he's always starting out with the optimistic mindset that it won't be too serious.

I asked Torey if Stress due to Pandemic could be a contributing factor to all the muscle and soft tissue injuries, and he said it could be a factor but they have to just press ahead and deal with each day.

Luke Weaver said he felt confident that he'll be able to avoid the IL and he was just being precautionary. He spoke how he felt his mechanics were out of whack and he was beating up on his arm a bit as a result. He learned from his experience when he had the elbow issue two years ago, so he spoke up. But he seemed a bit sheepish at the end for creating "drama". Still, he was sure he made the right call so as not to put himself or the team at undue risk for a lengthy injury stint. The MRI tomorrow will tell if there is any damage of course. He's not the expert.