Bring back a championship to Arizona was not among the first executive actions.

Share All sharing options for: Snake Bytes: 01/25 - Purple And Teal

[Twitter] VP and FLOTUS are ready for Throwback Thursday 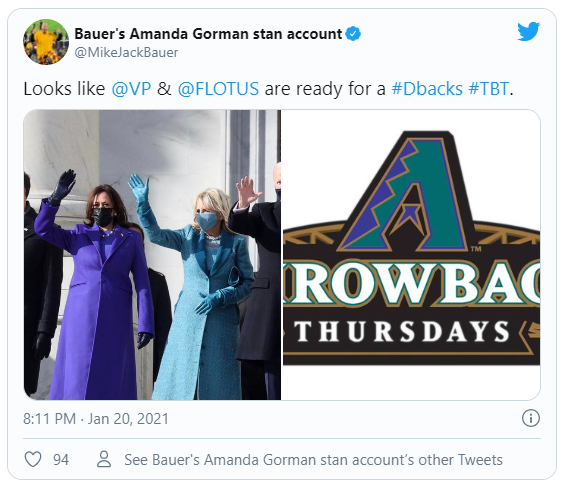 [mlb.com] These are baseball’s 10 best 1B prospects

Brad Hand gives 30 MLB teams a slap in the face and signs a “bigger” deal than the $10.0 million waiver every team could have claimed a couple of months ago.

Diamondbacks’ bench coach Luis Urueta could not coach his team in the final two games of the LIDOM final and saw his Gigantes lose to Águilas 4-3 in a best-of-seven after leading the series 3-1.

Águilas won last week in a best-of-seven their 22nd league title, after having trailed 3-1. A big party with probably one too many fans in the stands have taken their toll on the Águilas roster, with 4 confirmed COVID tests and probably a triple of that unconfirmed.

In Colombia the Caimanes de Barranquilla took home their 11th domestic league title beating the Vaqueros de Monteria 4-3 in a best-of-seven, after trailing 1-3 after four games. Caimanes ended third in the regular season and contracted big league catcher Sandy León for their play-off run, after he wrapped up his participation for the Licey in the Dominican Republic.

The Caribes de Anzoátegui are just one win away from their 4th title in Venezuela after beating Cardenales de Lara in the third game, in a best of seven.

In Puerto Rico the Criollos de Caguas took home the Roberto Clemente trophy for the 19th time after beating Indios de Mayaguez 4-0 in a best-of-seven. Former D-Back Reymond Fuentes was on the winning side, just like Yadier Molina.

In Mexico the Culiacan Tomateros and Hermosillo Naranjeros are tied 1-1 in a best-of-seven. Former D-Back Fernando Salas notched the save in the first game for the Naranjeros, yet another highlight after having won the reliever of the year award.

On January 31 the Serie del Caribe will open with the Federales de Chiriquí, representing Panama, playing the Caribes de Anzoategui. The other participating teams will be Criollos de Caguas (Puerto Rico), Caimanes de Barranquilla (Colombia), Águilas Cibaeñas (Dominican Republic) and either Culiacan Tomateros or Hermosillo Naranjeros (Mexico). Panama is the only team not sending their domestic champion after it cancelled their 2020 baseball competition.