Taylor Clarke was once again shaky in his start, not making it through 5 innings while allowing 3 runs, which, in hindsight, is probably a result we would all sign for considering the home run derby that started early on. The Arizona Diamondbacks offense bailed Clarke out again and had 15 hits, of which 5 homeruns, and scored in 6 of 9 innings. Unexpectedly, opposing starter Stephen Strasburg who had been pretty much lights out until today, was the D-backs offence scapegoat, allowing 6 runs in 5 innings of work, deserving therefore the big L. When the game was over the D-backs had been dominant offensively, defensively, and our pitchers outperformed theirs.

Today's starters were not the guys I had hoped for when signing up for the recap: I was hoping for Patrick Corbin, of course, but Stephen Strasburg is a very nice pitcher to see this year as well. As Ish pointed out perfectly in his preview:

[...] considering over his last seven starts, Strasburg has only given up two home runs. [...] He’s going to be tough. Other than one bad start against the White Sox, he’s been nails over the past six weeks or so.

I was not having much hopes for today's game. But we always need to look for positives. We know our offence can be very powerful and Ish also mentioned about Strasburg:

[...] Now that’s not to say he can’t be taken deep. He was averaging one homer per game in his first six starts this season. [...]

Rumours go that Ish has a direct line with Ketel Marte. How would you otherwise explain that instead of listening to most fans, coaches and experts to be more patient at the plate, he swings at the very first pitch Strasburg delivers? A tough pitch at the bottom is lifted by Marte into right field where it drops into the Nationals bullpen: 1-0. Vargas and Peralta then ground out, but Adam "praised he who did not go onto the IL" Jones sends a fastball served perfectly by Strasburg out into left field and puts the second run on the scoreboard for the Diamondbacks. Escobar strikes out to end the inning, but: wow. I mean, wow! Who would have thought we would get 2 runs off Strasburg and in the first inning?! But we cannot start cheering too soon, though, because:

Right, our rookie starter has had a bumpy ride so far in the majors and in his last start he was bailed out by the offense. Today, it seemed from the very first that another bail out was needed. In the first Washington at bat Trea Turner hits a ball with a bump just past Escobar at third and it rolls slowly into the left corner for a triple. And you can see trouble is coming up. Adam Eaton flies out but Turner crosses home plate. Anthony Rendon, however, strikes out and perhaps Clarke will allow only one run, but then Juan Soto and Matt Adams hit two solo home runs off Clarke and all of a sudden we are down 3-2.

Game is over, people. Get the bullpen warming up, Clarke sucks and tomorrow's bullpen game needs to salvage the series. Oh wait...is that Christian Walker smashing a ball into center field to tie the game at 3? 35% launch angle, 100mph exit velocity...excuse me, Sean Testerman, did you make a certain prediction? In the next at bat Nick Ahmed hits a ball hard for a triple for what could've been an inside the park homer. But, let's be honest, was that dude in center field really trying to catch that ball? That hit the wall behind him at a height I am pretty sure Dyson would have caught. Carson Kelly brings Ahmed home with a ball through the middle and the Diamondbacks take the lead again: 4-3. Clarke is able to hold his own in the bottom second and gets 3 outs in a row against the bottom order of the Nationals.

Strasburg looks to settle down in the third, but with 2 out Eduardo Escobar singles and then advances to third on a Walker single. That shot went pretty much through the middle but, again, I got the feeling that the D-backs would have saved something there, like a great dive from Ahmed who would immediately jump up and throw out someone; Turner pretty much just ran a bit and saw the ball pass. Turner plays another dubious role in the following at bat when he cannot get the glove on an Ahmed double that brings Escobar home. D-backs increase the advantage to 5-3 and load the bases when the Nationals intentionally walk Kelly to end the inning with a Clarke groundout. Clarke is far from efficient in the bottom 3rd and allows 2 runners but fortunately no runs. Crazy game people:

Strasburg is well over 60 pitches in the 4th and is greeted again by Marte with a homerun. 6-3 in the fourth? Are you kidding me?! Or better stated:

Nationals stadium is pretty much silent by now. Clarke allows another runner but the Nationals' bottom order again is not able to do any damage. In the top of the 5th no D-backs runner gets on base and all of a sudden it feels weird to have an inning without seeing a sedona red shirt running the bases. Clarke looks to make it through 5 innings, but with the 100 pitch count, a single from Rendon and a lefty in the batter's box, Lovullo decides to pull him for Andrew Chafin who strikes out Soto to end the inning.

In the 6th Strasburg does not return. Javy Guerra is the reliever that is able to get outs from Kelly and pinch hitter Locastro, but with 2 outs Marte gets on base when Turner misplays a bumpy single. Ildemaro Vargas is unlucky when his hit is counted as a ground rule double, stopping the speedy Marte at third who would otherwise have scored. With runners on second and third base, Peralta flies out to end the inning. Yoshi Hirano allows a double to Brian Dozier but puts another 0 on the scoreboard.

Top of the 7th and Guerra finishes his second inning with no runs allowed. Hirano comes out for the second time in the bottom 7th and allows Trea "we let him get to base for each shabby play he makes" Turner to reach base and is pulled after two outs to have Yoan Lopez face Rendon. What did you say, DC...?

As everybody knows by now after having read my high leverage article, Lopez is great against the 3rd and 4th batters in the lineup and Rendon pops out.

Ahmed keeps on rocking in this game and singles to start off the 8th against Kyle Barraclough. Kelly grounds out and then Kevin Cron gets up to home plate. I love this dude. He has a meany grin and looks like the bad ass soldier that carries the gatling gun. In a great at bat, Barraclough gets nervous. On a wild pitch Ahmed advances to third and in the following 2-2 pitch he lets a fastball catch too much of the plate...thank you and good bye says Cron. You hear the smack and you just know with this batter that the ball is out of here! 8-3! Looked like the typical moment where DC would start to call a siren, asking for some runs, but he needs to leave the chat for a moment but we have other people stepping in...

Exactly! Barraclough is now completely out of control and walks Marte, then gives up a single to Vargas. He is lifted for Tony Sipp who faces the hitless David Peralta. He works up the count in his at bat, finally resulting in a double that brings Marte home: 9-3. Adam Jones then hits a grounder to third where Vargas is tagged out and Rendon gets the double play because Peralta is thrown out at second as well. Was he dreaming or aiming to advance to third base in a possible Vargas rundown? The Diamondbacks challenge the Vargas call, but without success. Lopez returns for a 1-2-3 bottom 8th.

Trevor Rosenthal starts the 9th and attracts the biggest cheers from the crowd in 2 hours when he pounds in his first strike on pitch 6. Without any command he walks both Escobar and Jarrod Dyson, then Ahmed singles to load the bases with no outs. Kelly hits a sac fly and Escobar crosses home plate: 10-3. Rosenthal starts throwing some serious heaters now; constantly reaching 98-100mph and is able to lure Cron into a double play. While victory is already cheered in the GDT, T.J. McFarland gets the bottom 9th and finishes the match without any big problems inducing some nice grounders.

Two COTN candidates today. The first one is from asteroid and embodies well general opinion from many of us:

Although, we'll see how people think about that if we lose 3-4 games in a row again.

The second one I have to post as well since it is from one of the few happy people present in Nationals park today. dbrowell went all the way from Virginia to Washington to see his favourite team with his lovely family. Good for you! 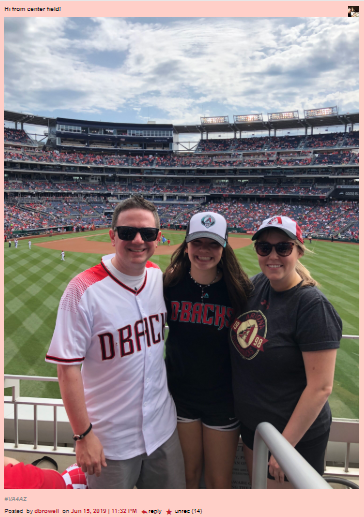 As of now, we don't know who will start tomorrow's game for the D-backs. Let us hope that the possible bullpen start will lead the way to a series win and that you will be with me in the GDT to witness it to round up a nice Father's Day. Thank you for joining us today, for reading this recap and for supporting the D-backs on Jim's AZSnakePit.

One final word of advice for all people in Washington: it is nice to dance early, but who dances last, dances best! 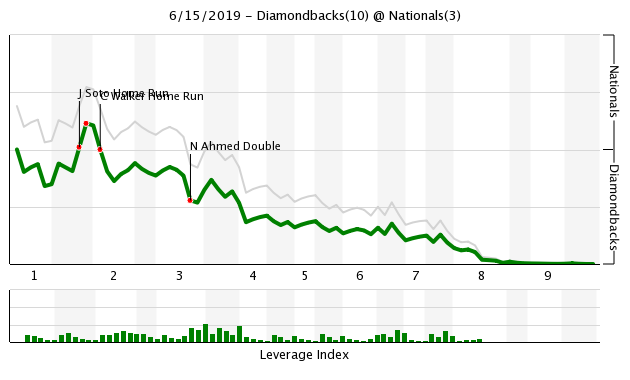 We reconvene tomorrow for the last game of the road-trip, with the D-backs having a shot at making it eight wins out of ten. The team just announced that Archie Bradley will be starting, which will be... interesting! 10:35 am first pitch, Arizona time for that.