With the playoffs only 24 days away, the Diamondbacks were able to add to their win total in the form of a 3-2 win over the San Diego Padres this afternoon at Chase Field. Robbie Ray was electric once again, allowing only 2 runs in 6 innings, striking out 12. The offense was anchored by three solo home runs, two from JD Martinez and one from Paul Goldschmidt.

JD Martinez continues to perform at an incredibly high level, as he now has 21 long balls in 44 games as a Diamondback, and 37 homers this season, including 10 in his last 11 games. After the win today, the Diamondbacks are 15-3 over their last 18 games, holding a commanding 5 wild card game lead over the Colorado Rockies and a 7.5 game advantage over the Milwaukee Brewers and surging St. Louis Cardinals for a spot in the wild card game.

Playoff success is usually predicated on elite pitching, and the Arizona Diamondbacks appear primed for a deep postseason run. Entering today’s game, their pitching staff ranks 4th in pitcher fWAR, 5th in xFIP, 4th in FIP, and perhaps most impressively, 1st in HR/9. Giving up home runs at the lowest rate in Major League Baseball, while playing half their games at Chase Field, is a tremendous accomplishment. Among starting pitchers who have logged 100 or more innings, the Diamondbacks have four individuals (Greinke, Godley, Corbin, and Ray) ranked within the top 30 in pitcher WAR. In other words, the Diamondback rotation contains four starters who are pitching at ace-like levels this season.

In addition, the bullpen has the pieces to contribute valuable innings in postseason play. Archie Bradley is the 7th best relief pitcher in baseball this year, according to fangraphs, sporting a 2.0 fWAR. In addition, David Hernandez, Andrew Chafin, and Fernando Rodney have all contributed valuable innings in both low and high leverage situations. While the Dbacks don’t boast a plethora of firepower coming out of their bullpen, there should be a sense of comfortability in the serviceable arms they currently have.

While most Arizona Diamondbacks fans are jumping off the Fernando Rodney train, we at Greatest Goat Sports still trust Fernando Rodney in high leverage, late game appearances. While posting a very respectable 1.1 fWAR, Rodney also presents value in his ability to strike opposing batters out while keeping the ball in the park. His 0.54 HR/9 is the 21st best rate in the MLB, aiding his respectable and well above average 3.22 FIP. While Fernando Rodney has been far from dominant, casual baseball fans may look at his 4.68 ERA and 6 blown saves as a death sentence. We encourage you to delve deeper into advanced analytics and controllable outcomes to truly and accurately determine seasonal productivity.

Hoping to continue their winning ways, the Diamondbacks welcome the Colorado Rockies, a potential wild card game opponent, to Chase Field this week. Catch in depth coverage and expert analysis from both AZ Snakepit and Greatest Goat Sports, as the Dbacks look to pad their wild card lead. Once again, we would like to thank AZ Snakepit for the opportunity to recap today’s game and contribute to their website. If you love Arizona Sports, be sure to listen to our podcasts on iTunes, released every week by the Greatest Goat Sports Podcast and follow us on twitter, @GreatestGoat. 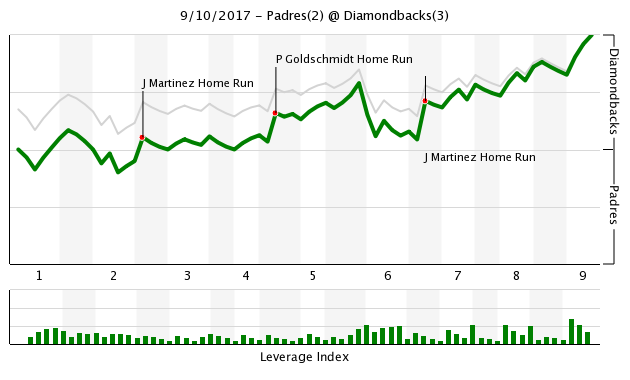 The Rockies come to Phoenix tomorrow, five games behind Arizona, and with 19 left to play. If the D-backs win the series, we can probably all but start paying for those wild-card tickets at Chase Field...