The Arizona Diamondbacks defeat the Milwaukee Brewers 11-1 behind another dominating performance by Robbie Ray who blanked the Brewers over 6 2/3 innings while registering a season-high 12 strikeouts. The D-Backs end up taking the current and season series against the Brewers and finish their home stand with a 5-1 record leaving Arizona 13 games over .500 on the season. During this impressive six-game stretch the D-backs have still only managed to maintain their two game deficit with the Rockies who finally lost for the first time in eight games today.

Leading off the top of the first inning for Milwaukee was Lewis Brinson, who was making his Major League debut. He is promptly robbed of a hit by Nick Ahmed making a diving stop to his left welcoming the young man to the Big Leagues. Robbie Ray does not give up a run this inning or any other inning for that matter. We need to start getting used to that theme. In the bottom of the first, Jake Lamb added his league-leading 57th RBI for the season on a ground ball scoring Gregor Blanco. Recently, Jake Lamb described Robbie Ray as a "stud". You're pretty studly yourself Mr. Lamb.

That first inning run was the only blemish on Chase Anderson's record today over 6 innings of work and the first run surrendered after a streak of 22 1/3 scoreless innings for the former D-Back hurler. Several times during his outing today he reached 97mph on the gun and twirled some magnificent curveballs and change-ups baffling D-Backs hitters. Each time that happened I developed a slight, but increasingly noticeable twitch in my right eye.

Sure, it was nothing like when Max Scherzer had his 20 strikeout game last year. That day I couldn't decide if I needed half a bottle of Pepto Bismol or half a bottle of whiskey. Needless to say, the Pep and Jim cocktail, a.k.a. "The Scherzer" will only be needed for the most serious of front office botched trades. Letting go of Chase Anderson is not that serious yet, but I am developing a twitch. On a side note, Max become the third fastest to 2000 K's today which would have made me queasy last year, but we are playing good baseball so far this year so I will keep the liquor and medicine cabinets closed today.

Unfortunately for Chase Anderson, Robbie Ray was even better. This is getting serious, what Robbie Ray has been doing this past month and a half. Working fast and commanding all his pitches with great velocity and movement. I hate to be premature about making the playoffs, but even though the NL West is clearly the best division in baseball, the D-Backs at the end of today will have a 6 1/2 game lead for a wild card spot and are only 2 games behind the Rockies for the division lead. In a playoff series, could Greinke and Ray be our new Johnson and Schilling? It used to be: Johnson and Schilling then pray for rain God willing. Could this year be: Greinke and Ray then for Rain, Let us Pray? Something like that? It is premature, but I wanted to coin the phrase now before someone else does.

It was still a 1-0 Diamondbacks lead at the start of the 7th inning. Robbie Ray struck out the first two batters. Then, suddenly, the home plate umpire decided to start calling pitches he called strikes all day long as balls. After two walks, Ray was removed for J.J. Hoover who promptly walked the bases loaded. It seemed like the pivotal moment in the game when Jorge De La Rosa struck out Eric Thames to end the threat.

However, the Diamondbacks would score 10 more runs while hitting 4 home runs in the next two innings. Wow.

There you have it, this game changed quickly once the Brewers bullpen took over. The 7th inning started with a Brandon Drury opposite field home run, who has been showing off some nice power as of late. Then Chris Hermann, on a 0 for 25 skid, nearly hit an opposite field homer, but it was ruled foul. The umpires chose to go to the replay booth just to make sure. I could see it was foul on the replay, but I was still hoping to see it overturned just to see another Craig Counsell meltdown of displaced anger like the one he had in Milwaukee against the D-Backs a couple of weeks ago.

If you recall, he starting yelling at the home plate umpire for a replay decision that some nameless umpire in N.Y. had made. After a hard day of work, I once displayed a residue of displaced anger by giving a snippy response to my wife's inquiry about how my day went. Like Craig Counsell, I was ejected. Out of the bedroom, and the next morning I paid my fine to the local flower shop and learned my lesson. Hopefully, Counsell has learned his lesson too. But I have been enjoying the Craig Counsell reaction shots caught on television. It is hard to describe but he always looks like a combination of uncomfortable, tense, pensive, and annoyed. Seems to be working for him, he almost looks younger as a manager than he did as a player.

The foul ball call on Chris Hermann was confirmed. But it didn't matter, he still got his home run that at-bat and ended his hitting slump. Later that inning David Peralta hit the left field foul pole (he hit the right field pole earlier this year). His home run was not needed, but it did help boost his RBI total to 17, which is surprisingly low while batting 2nd in the order most of the season. He has been hitting well, perhaps it just shows the lack of production at the bottom of the order.

Finally, in paragraph 9, I can bring up the fact that Paul Goldschmidt hit a monster grand slam home run to centerfield to finish off the rout. The game was already won, but our slugger wanted some dessert. Please tear up the last 2 years of his contract so we can get at least some discount on a long-term deal. Goldy is not only the face of the franchise for the Arizona Diamondbacks, but also of Arizona sports in general. Larry Fitzgerald will be retiring soon. The Suns are mess and would just trade away any good player they stumbled across . Goldy needs to stay with us long enough to retire his number 44 to the rafters. Today's home run wasn't needed, but it did continue making his next contract a bit more expensive.

By the time Silviano Bracho came in, the Diamondbacks had an 11-run lead that even he couldn't blow. He did give up a run, which didn't even hurt his ERA any. Hard to believe they keep bringing him up. Must be nobody else available which is unsettling. As you can see in the graph below, the game was in some doubt until the 7th inning. Scoring runs and not giving them up seems to help your chances of winning. Do we even need all those other statistics?

By the way, I have to good fortune of being able to watch the Diamondbacks on MLB.tv. Which means I can view all my games using the telecast of the other team. I would assume most of us would do the same if given the opportunity. However, if by chance, our announcers said something insightful, rather than obnoxious, please let me know in the comments below. I haven't heard them in over a year to keep my blood pressure under control. 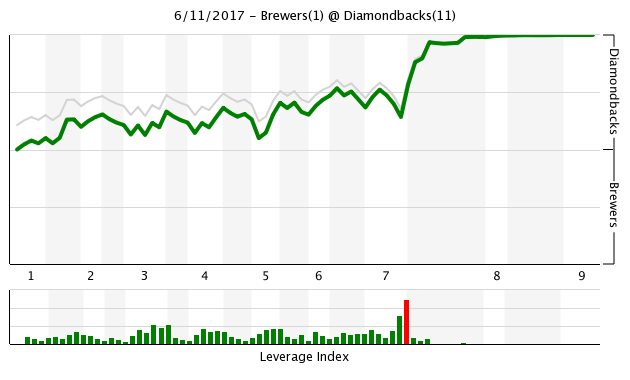 The Brewers fan behind me is SO frustrated

Baseball is the greatest game ever invented. Ever. Say Amen.
- Ernie Banks

A well-deserved day-off tomorrow for the team, as they fly to Detroit to start a quick two-game series there on Tuesday. But tomorrow is the MLB Draft, and with the D-backs having a top ten pick, there'll be plenty to mull over here, including an open thread for that.