It was a close thing, but Arizona squeaked past Colorado for the narrowest of blowout victories in Denver.

Share All sharing options for: Diamondbacks 9, Rockies 4: Arizona edges it in Coors

If you think that intro paragraph falls under the category of literary license, let me remind you that last night, the Rockies scored seven runs in the eighth inning, after having their first two hitters retired. They also scored six runs while making one out earlier in the game. So, you'll understand if I didn't start writing this recap until an excellent diving play from Jake Lamb, to record the third out in the bottom of the ninth inning. But it's interesting to note that, despite our bullpen's struggles, the D-backs are still 49-1 when leading after eight innings, and 50-3 when leading after seven. Still: Coors Field.

The key differences tonight were the Diamondbacks' clutchiness, and the significantly better bullpen. Arizona were 5-for-9 with runners in scoring position, while Colorado were 2-for-9. The home team had some chances to put together big innings, as they had done so effectively last night; However, Braden Shipley did a better job of stopping them from stringing together hits. He wasn't exactly dominating, striking out only three of the 24 batters faced. However, he mostly got the big outs when needed, beginning with double-plays in both the first and second innings, then stranded a lead-off double in fourth.

Admittedly, he did allow an opposite field home-run to Gerardo Parra in the third, and a two-run homer in the fifth pulled the Rockies to within three. Shipley wasn't quite able to escape trouble in the sixth. He put the first two on, then recovered with big strikeouts of Nolan Arenado and Roald Dahl [well, it was somebody Dahl...] However, an RBI single, compounded by a throwing error from Socrates Brito (though I would have given that to Jake Lamb for a particularly feeble effort at cutting the throw off), brought the tying run to the plate, and left two in scoring position. Chip Hale turned to left-hander Edwin Escobar, who got Parra to go down swinging.

The Arizona bullpen was as good tonight, as they were wretched yesterday. They had six strikeouts to one walk, and 3.1 scoreless innings in Coors Field is no small feat. Escobar, Jake Barrett and Daniel Hudson each worked scoreless frames, with Randall Delgado getting the final out of the seventh, once again as Colorado threatened to put together a rally. This was our 15th game against the Rockies this year, and we've only once held them to fewer run - the 5-1 victory on May 10th. We've conceded eight or more runs on seven occasions, so any night we can keep them to half of that is a pretty good performance.

The offense delivered too, with every starting position player getting a hit, and six of the eight crossing home-plate at least once. Chris Owings led the way with his second career four-hit game. CO had a bit of a tough haul when he first came back off the DL, batting .143 (7-for-49) with no walks during his first two weeks, and he seemed to be struggling to find his timing. Then it clicked, and over his last 25 games since August 7, he is batting .358 (34-for-95), improving his overall average for the season by 31 points - he's now hitting .285. Could still do with more walks - he has four over his last 158 PA - but at least he's hitting.

As yesterday, a big inning helped the D-backs out to a significant early lead. They had gone ahead in the second, Owings singling home Lamb. However, it was the third inning where they opened the floodgates, scoring five times with one out. Phil Gosselin, batting lead-off as Jean Segura battled illness, singled so did A.J. Pollock. Paul.Goldschmidt walked, to load the bases and Welington Castillo then emptied them, doubling down into the left-field corner. This was followed by Jake Lamb's 27th home-run of the season, an opposite-field shot of 380 feet which tied him back up with Yasmany Tomas for the team lead.

Unlike last night, the offense didn't pack up their backs and go home. Shipley helped himself out by delivering an RBI groundout in the sixth, coming with runners on second and third - the Rockies' fielder thought about coming home, before deciding better of it. And Arizona then tacked two more on in the seventh inning. Goldschmidt doubled home A.J. Pollock, and then scored himself on a Tomas single. As well as Owings' four hits, Castillo, Lamb and Pollock each picked up two hits, and the Diamondbacks as a whole notched 14. That's the 19th time this season they've reached that figure.

All told, certainly a much more enjoyable game than last night, though it did bring home how there's no such thing as a safe lead at Coors Field. Especially when the Diamondbacks' bullpen is involved... According to the Fangraph below, the Rockies' win probability never got even to 25% after Castillo's three-run double. Can't say it felt quite as easy as that... 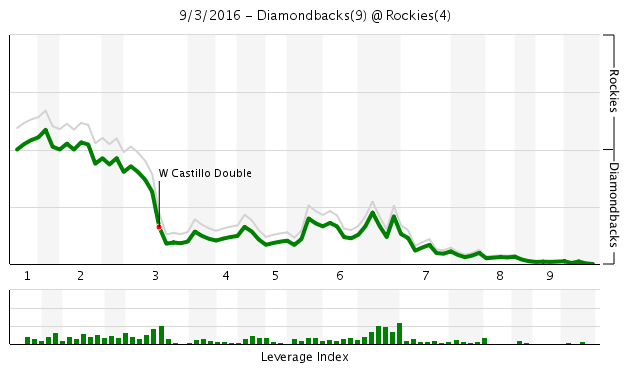 A busy but shallow Gameday Thread, by which I mean, over 330 comments, but six people were responsible for more than 90% of the numbers. Those present were: AzDbackfanInDc, AzRattler, GuruB, Jackwriter, James Attwood, Jim McLennan, JoeCB1991, Makakilo, MrMrrbi, SongBird, asteroid, hotclaws, onedotfive and shoewizard. hotclaws wins comment of the thread, for this.

One rec should get COTD today.

I should point out, it actually got five recs... The victory means tomorrow becomes the decider of the series, with Archie Bradley starting for the Diamondbacks, and a first pitch scheduled at Coors for 1:10pm, Arizona time. See you there for a very special guest recapper... :)