"Whatever the over-under on runs scored this weekend is, you should probably take the over." So sayeth the preview. So goeth the game.

Through the first three innings, you might have been forgiven for wondering if the teams were actually playing at Coors Field, or at some low-altitude simulation of it, as Colorado and Arizona combined for just the one run. There were some minor opportunities, such as in the second where the D-backs put their first two on. However, a double-play ball off the bat of Brandon Drury took the steam out of that rally. The Rockies then walked Chris Owings and retired Robbie Ray to end the threat. Conversely, a pair of of walks from Ray gave Colorado a chance, with two men on and one out, but a sharp grounder back to the mound started a twin-killing of our own.

The Diamondbacks scored first, taking advantage of a rare error by Nolan Arenado to help put A.J. Pollock on second and Paul Goldschmidt on first. A groundout was followed by an RBI single from Yasmany Tomas, and Arizona had the lead. They then tacked four more in the fourth, and again, a Rockies error proved crucial. After Drury and Owings singled, Ray put down a bunt, but Jorge De La Rosa threw wildly past first: two runs scored and Ray ended up on second. After a pair of groundouts, Goldschmidt doubled home Ray, stole third (just because he's Paul Goldschmidt) and another Castillio RBI single made it 5-0 to Arizona.

Though his control was a little wobbly, Ray was cruising, having allowed only one hit through four innings, that being a harmless two-out single in the fourth. But Coors Field always gonna Coors, particularly when Ray came up against his old nemesis, the third time through the order. I think this, rather than pitch counts, are his big problem. Coming into this game, here's how his numbers stack up when batters see him for the first, second and third occasion,

You don't need any kind of math degree to see that, the more hitters see Ray, the easier they find him to hit. This evening was a clear demonstration of this. His first time through the order he was 0-for-7 with a pair of walks. The second time: 5-for-9, and 3-for-4 in the third, as the Rockies led off the bottom of the fifth inning with five consecutive singles. One out later, they got a bloop to right field, compounded by a poor throw back in from Tomas, then another RBI double followed. The five run lead had evaporated entirely into a deficit, and taken Robbie Ray along with it. His final line was: 4.1 IP, 8 H, 6 R, 5 ER, 2 BB, 2 SO. And that, remember, after working one-hit scoreless ball through four...

Ouch. There you are Coors Field. I wondered where you had gone.

But Denver giveth, as well as taketh away, and the Diamondbacks struck back immediately - it was only five pitches before they were back in the lead. Jean Segura singled, and A.J. Pollock followed with his first home-run of the season, towering into the left-field bleachers. That lead didn't last either, after the leadoff hitter for Colorado bounced a ball under the glove of Jake Lamb, coming around to score and tie things up, one sacrifice and a single later. However, that was it off Godley, who got five outs, and Edwin Escobar then worked a scoreless inning too. You can't predict baseball, as I believe they say.

However, you could probably predict that the Diamondbacks' major-league worst bullpen would not do well in Coors Field. And so the eighth inning proved. Enrique Burgos got the first two outs without issue. However, the third out would require 28 further pitches eight attempts by Burgos and Silvino Bracho, with seven runs scoring, mostly on a grand-slam against Bracho, after he came in with the bases loaded. He then allowed another homer, before the inning mercifully ended. But it gave Arizona's league worst bullpen another black eye, posting a line tonight of 3.2 innings of work, with eight runs allowed, all earned, on six hits, four walks and a hit batter.

Compare that to the Colorado bullpen, which was positively decent by Coors standards: They threw four innings, giving up three hits and two earned runs with no walks and four strikeouts. That was the difference in the game. Normally, seven runs would be more than enough to get you a win, and the offense did its share tonight. Tomas got three hits, while Pollock and Owings each got on base three times as well. Looks like someone on the D-backs bench - either Chip Hale or hitting coach Dave Magadan - was tossed from the game after the final out, for chirping about the strikeout of Tomas which ended the contest. 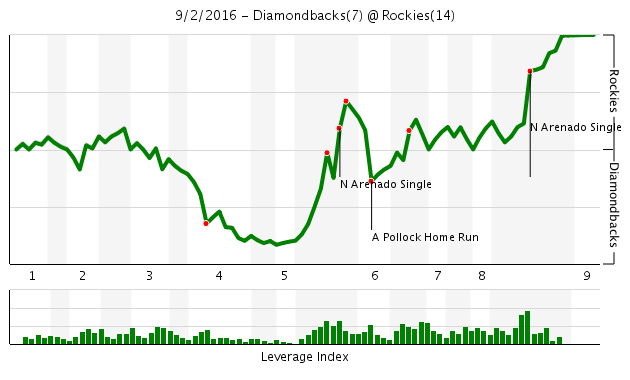 AzDbackfanInDc led all commenters, though didn't stick around long enough to see his boy Gerardo Parra enter the game - in what must have been some impenetrable piece of performance art, Walt Weiss plugged Parra into first-base. Jackwriter, and asteroid rounded out the top three, and also present were: Gilbertsportsfan, GuruB, Hazzard21, Jim McLennan, JoeCB1991, Makakilo, Oldenschoole, SongBird, Umbrella24, Zavada's Moustache, gamepass, hotclaws, makattack71, noblevillain, onedotfive, porty99 and shoewizard. Comment of the night to Hazzard21 for their correct prediction:

Bring out the Robot Umpires
Cardinals and Diamondbacks

Tomorrow.... Well, let's see if Braden Shipley and the rest of the pitching staff can avoid conceding 14 runs, shall we? That'd be... helpful. 5:10pm first pitch, so I'll have to find somewhere to watch this one with Mrs. SnakePit while having dinner. Islands? Could be...