Shelby Miller was great! The Diamondbacks bullpen, however, wasn't.

On a night where it was announced Zack Greinke would be having an MRI on his shoulder (the good news being, the result showed no structural damage), Diamondbacks fans could certainly have used some good news. It came from the unlikeliest of sources as, for the first time since being traded from Atlanta, Shelby Miller pitched like the good pitcher we expected. Unfortunately, it wasn't enough, as three home-runs against the Arizona bullpen, gave the Baltimore Orioles a walk-off win in 12 innings, with former D-back Mark Trumbo providing the final nail in the coffin.

But, let's rewind to happier times. I'm writing these words in the middle of the sixth inning, and Shelby Miller is pitching a shutout. As in, no runs allowed. I feel like I have gone through some kind of wormhole into an alternate universe, which looks and feels like our own, except Miller is a good pitcher. Adding to the confusion is that I'm simultaneously watching Team GB against Pakistan in the World Baseball Classic qualifying contest, and I keep forgetting which tab I've got open. The good news is, Britain is winning, so it looks like they will get a shot against Brazil tomorrow, with the winner of that that then facing Israel in Sunday's final, for a spot in the WBC next year.

Back to our main feature. The surprising performance of Miller. It's all the more startling, because this did not begin in the most promising of ways for him. A lead-off walk was followed by a one-out single, and the next batter then hit a pitch that could probably not have gone any further, and still stayed in the ballpark. Yasmany Tomas didn't actually have to make much of a leap for it - likely for the best, all round - but caught the ball with a little hop up, and his back all but pressed against the outfield wall. Another walk then loaded the bases, but Miller got Pedro Alvarez to strike out swinging, and the Orioles were prevented from getting on the board right away.

From there, it turned into relatively smooth sailing for Miller. After a one-out single in the second, he didn't allow another hit until a double from Mark Trumbo with one out in the sixth inning. The only base-runners allowed by Shelby came on a two-out error in the third by Jake Lamb, and a walk which immediately preceded Trumbo's hit. That put the tying run in scoring position, but Miller prevailed and kept the shutout intact, getting an infield pop-up and a fly-ball to center, the latter coming on his 96th and final pitch of the night. Miller ended up throwing six innings, allowing three hits and three walks with three K's. More fly-balls than I'd expect, but still, his best start of the season, without a doubt.

This left Shelby in line for his first win in over three months (since June 20), with the Diamondbacks having managed to push two runs across against Yovani Gallardo. These came early, one in each of the opening two innings. Arizona opened the scoring with a two-out rally in the first, beginning with a Goldschmidt walk. Welington Castillo then singled him over to third, and Jake Lamb blooped a double down the left-field line for an (admittedly, somewhat fortunate) RBI double. With two outs in the second, Jean Segura moved a hit closer to two hundred, getting #192 for the season and driving in Brandon Drury, who earlier in the inning had missed a lead-off home-run by a few feet.

But after that, the Diamondbacks found hits almost as hard to come by as the Orioles. Chris Owings drooped down a lovely bunt single with one out in the fifth, only for Goldschmidt to follow with an inning ending double-play. Yasmany Tomas doubled with two outs in the sixth, and was stranded there. Owings led off the top of the eighth with a single to left, only to be thrown out at second as he tried to stretch it into a double. And that was it for the D-backs offense through the end of regulation.

The bullpen coughed this up, being unable to sustain a two-run lead with four outs and the bases empty. Randall Delgado threw a scoreless seventh, and Steve Hathaway a beautiful strike for the first out in the eighth. However, Enrique Burgos put the Orioles on the board with a two-out home-run, and Daniel Hudson blew his first save in four weeks, allowing a lead-off bomb in the ninth. Things could have been worse still, save for ex-Diamondback Michael Bourn failing to get the bunt down after the next batter singled. The runner instead advanced to second on a Hudson wild pitch and after a single was thrown out at home by Socrates Brito, the play standing after an Orioles' appeal.

Extra innings? Oh, if you insist. Neither side managed anything in the tenth. The D-backs did get two on with one out in the 11th, after singles from Goldschmidt and Welington Castillo, but outs from Lamb and Tomas followed  The Orioles came even closer, putting their first two on against Zack Godley; Bourn got the bunt down this time, but after an intentional walk, a shallow fly-ball couldn't get the run home, and Edwin Escobar got the final out on a fly-ball. Arizona lasted only eight pitches in the top of the 12th, and Matt Koch's bottom half was quicker stull, Mark Trumbo jerking the fourth pitch into the left-field seats for an Orioles walk-off win. 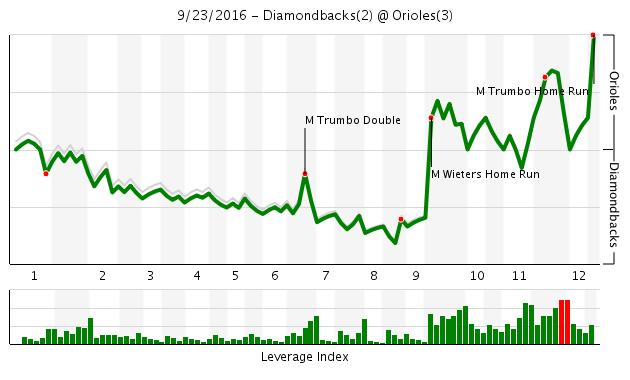 We'll try again tomorrow., with Robbie Ray looking to strike out even more batters on the way to his latest five inning non-quality start. Or something.