Diamondbacks 2, Padres 3: As the nation yawns...

We were treated to a national audience tonight since the game was carried on FS1. I hope the 17 people who watched it got their money's worth. It was everything that a fan could ask for... two teams vying for the playoffs, players of renown, showing off their skills, the ballpark was electrified in anticipation of this match up of the best that baseball had to offer.

Share All sharing options for: Diamondbacks 2, Padres 3: As the nation yawns...

well, perhaps it seemed rather familiar... we had dubious umpiring, listless offense, some sketchy defense and a pitching performance that was like Yogi famous quote, deja vu all over again...

The Pads struck first with a 3 run 4th.  It was the usual, 3 innings of good work by Shipley and the proverbial wheels falling off on the 2nd time thru the order.  At this point, you have to wonder... is it the pitch calling? The lack of talent or perhaps some unknown Haitian curse?

Will Myers started off the home half of the 4th with a dinger, because reasons, then Shipley gave up a walk, and then a wounded duck and then a defensive miscue and it was 3-0 Pads in the 4th.

The Dbacks answered with two in the 7th, chasing Richard from the game, post a triple by young Mr. Jensen (his first) and an infield single by he who is Phil Goselin and when the Dbacks looked poised to tie it up, the Pads brought in the master of the shutdown, Brad Hand.  Who managed to get Richie Weeks to hit into a rally killing double-play.

The game played out in the usual way, some good Padre defense, some spurious AB's by DBacks hitters showing zero situational awareness (really, my only real complaint about Magadan is that our guys do not play good situational baseball, at all, when hitting with few exceptions).

On a side note, the Dodgers and Giants cleared the benches in their game, sadly, no one was mortally embarrassed....

All in all, if you weren't here, it wasn't that much of a surprise, as the number of commenters rivaled those at the park itself.  Plus, with the broadcast team of Karros and Nitkowski, it was hard to get any sense of drama from such a meaningless affair as this and while they were boring, it was hard to put a shine on this turd of a match up.

A quick check on the game day thread shows less than 100 comments and if I could get away with it, I would go the Monty Python route on awarding the COTN, so I deem it should be Ms. onedotfive with this gem, which is kind of representative of the entire effort and our feelings at this stage of the season

Why is it, even with this very painful season,

Bells and whistles from Jim, if he could be arsed to put them up :-) 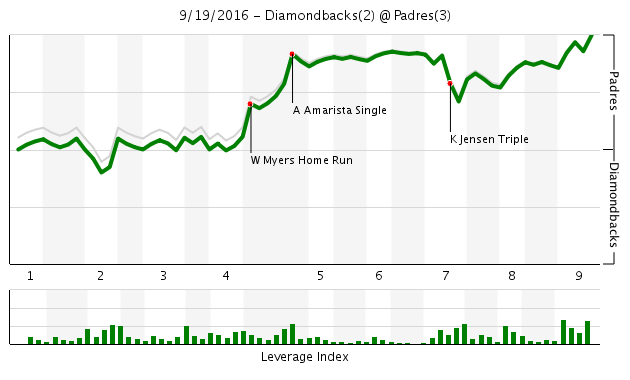 As the piratical one noted, this was a very quiet GDT, I think the first time this year we've fallen short of triple digits. I can't say I'm too surprised. Pinch-recapper piratedan7 led the way, ahead of Jim McLennan and GuruB, with others present being Dano_in_Tucson, JoeCB1991, Makakilo, MrMrrbi, Oldenschoole, asteroid, imstillhungry95, makattack71 and onedotfive. Comment of the night was already discussed above.

It's back to regular television tomorrow night, and I welcome this. I dunno who the FS1 commentators were, but I came close to throwing the cat at the TV set, for example the guy who claimed defense was the most important thing for a team.... only then to blame the Giants' offense entirely for their second-half collapse. Look, if you're going to take an untenable position, at least have the good grace to stick with it. Made me appreciate Bert and Bob a good deal more it has to be said. They'll be back tomorrow night, as we return to Fox Sports Arizona, and Archie Bradley gets the start for the Diamondbacks.