In which everything sucks, but it ends up alright, somehow.

Share All sharing options for: Diamondbacks 10, Dodgers 9: The bullpen breaks the Internet

I blame the Diamondbacks' relievers for everything. I'm fairly sure they had something to do with the wireless going out in SnakePit Towers in the middle of the ninth inning. We tried the old "turning it off and back on again" thing, but the router, after its lights gave a brief impression of a 70's disco, persistently returned to brick status. Fortunately, Mrs. SnakePit was just about at the end of her day's work, so as soon as she was done, we headed off to Best Buy, picked up a new router and returned. That's why I ended up finishing the quick recap on my phone, and why it sits in stately splendor on the front page, because my phone and the editor do not play well together.

I am, however, pleased to report that the set-up process for this router was considerably easier than the last one. Admittedly, I'm not saying the last one was old, but it was powered by steam. As I recall, there were DNS settings to type in. This time? Plug in router, connect to the network, click through a few prompts, and here we are, back on line and apparently stable. It may actually be an improvement, since the old one was wheezing under the strain a bit. When it was originally bought, pretty much all that used it were out computers. Now? Phones, tablets, Apple TV... I think even the SnakePit kitten has an Ethernet port. Anyway, thank you for bearing with us in this difficult time.

And that final statement is one which applies equally as much to this afternoon's game, whose generated emotions will likely parallel closely the Fangraph. Everything was great, than it wasn't, then it sucked horribly, then it was possibly going to be okay, and finally it was good again. Not great, mind you. Which is odd, because if you'd told me coming into the game today that we'd even the series on a walk-off win, I'd have settled for that in a heartbeat. But, it seems like un quite a few of the walk-off wins this season, this felt more like victory being snatched from the jaws of another, far more enjoyable victory than anything else.

The great bit would be the first four innings, where Robbie Ray was literally perfect, and the Diamondbacks jumped out to a 6-0 lead. Arizona scored three in the second, Socrates Brito reaching on a throwing error and Jean Segura singling home two. Mitch Haniger made it 5-0 in the fourth inning, with his third home-run of the year, and a Chris Owings double later in the frame brough home Tuffy Gosewisch. Meanwhile, Ray retired every batter he faced through two outs in the fifth. Even though that and the shutout evaporated on a solo home-run, Arizona got the run back in the bottom of the fifth, with Brandon Drury's 15th home-run of the year.

So, there we were, with a win probability that peaked at 98.0%, when Haniger singled after Drury's home-run and took second on a wild pitch, and was still 97.4% at the end of the fifth, as the D-backs led 7-1. That lead didn't even last three outs. It wasn't entirely Ray's fault, even though he ended up charged with four runs in the frame. He was lifted after 5.2 innings, with five hits, two walks and eight strikeouts. Those figures are very close to the median performance I mentioned in the preview (5.1 IP, 6 H, 3 BB, 7 SO, 3 R). Or at least, they would have been had the Diamondbacks' bullpen done its goddamn job.

@AZSnakepit Back to back doubles lead off 6th for Dodgers, both score to knock out Ray with 2outs & 2 runners aboard, Delgado in

@AZSnakepit Dogs I mean Dodgers load bases, run walked in by Delgado; 7-4 Dbacks with Escobar coming in to face A Gonzales

@AZSnakepit And just like that, POOF! Tie game at 7 with Dodgers still hitting & another pitching change #ILoveSeptCallUps

Instead, it took four pitchers to get the final out of the inning. With the Dodger already having scored once, an RBI single made it 7-3, and marked the end of Ray's afternoon. Randall Delgado came in, faced two batters and walked both of them - the second with the bases loaded. Chip Hale then went to the equally ineffective Edwin Escobar, who gave up a three-run double to Adrian Gonzalez, and the lead and 98% Win Probability was but a fond memory. Jake Barrett finally restored some order, ending the sixth and putting up a zero in the seventh, but another walk, this time by Enrique Burgos, came round to score the go-ahead run, LA bringing two home to take a 9-7 lead.

@AZSnakepit At two points in this game, Dbacks led by 6; now trail by 2

But, just when hope was fading, and Win Probability was down to under 12%, Chris Owings restored faith, delivering a two-run homer with two outs in the eighth. The D-backs did their damnedest to finish it in regulation, then loading the bases, and putting men on second and third in the ninth, yet weren't able to get it done, and we went into extras. Fortunately, the good D-backs bullpen also showed up, with Daniel Hudson, Zack Godley and Matt Koch combining for four shutout frames on two hits and a walk with four strikeouts. The only serious threat was in the ninth, and Hudson fanned Chase Utley to strand two in scoring position.

When the end came, it came relatively quickly. Paul Goldschmidt doubled with two outs in the 12th. Jake Lamb was walked intentionally, and Brandon Drury came through, getting on base for the sixth time, with his second walkoff single of the year, and giving Koch his first major-league W. As you can imagine, lots of offense to go around, led by Drury's four hits and two walks. Segura and Haniger each had three hits and a walk, Owings a pair of hits and Yasmany Tomas two hits after coming into the game late.

@AZSnakepit Win is a win but still disgusted coughing up 6-run leads, at least 5/5 homestand & 7 wins vs LA but still 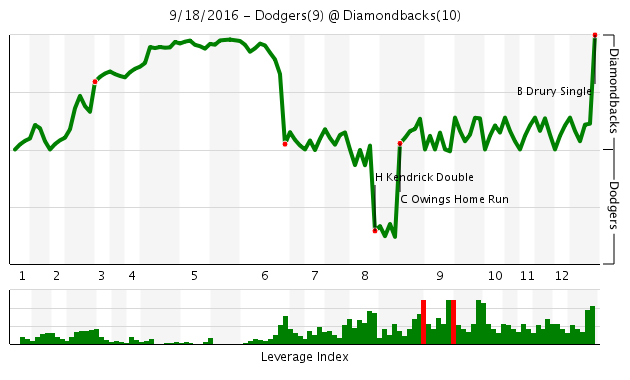 A lot of people sticking it out in the Gameday Thread, led by AzDbackfanInDc, ahead of Jackwriter and GuruB. Also spotted were: Augdogs, AzRattler, DbacKid, I suppose I'm a Pessimist, James Attwood, Jean Genie, MichaelMcD831993, MrMrrbi, SongBird, asteroid, coldblueAZ, gamepass, hotclaws, imstillhungry95, noblevillain, onedotfive and preston.salisbury. James takes home comment of the thread for this one: in reply to AZDbackfan's mention of 7 million cat adoptions.

That many people  were out of luck and looking to be adopted by a cat?

Thanks also to ZenDad for color commentating this one on the Twitter. Tomorrow, the team heads to San Diego for a three-game set against the Padres. I believe tomorrow's game is on FS1. That should be a true ratings bonanza... Braden Shipley starts for the D-backs, with Rubby De La Rosa back on the rehab trail. I'm now off to enjoy some high-speed, error-free wireless internet!