Rubby De La Rosa's return to the mound was a mixed bag. He looked pretty good in the first, retiring all three batters he faced. But the second inning established a pattern for the night of the "reverse Star Trek", i.e. the even-numbered ones sucked. Rubby was unfortunate, in that the runner who scored reached base on a swinging bunt that just wouldn't go foul up the third-base line. However, the consecutive walks that followed, loading the bases, were all De La Rosa. A sacrifice fly was followed by a strikeout, and Rubby's night was done: The first inning took 11 pitches; the second, 32. He allowed a run on one hits and two walks with three strikeouts.

By that point, the D-backs had already lost their first player of the night. A.J. Pollock had ended the bottom of the first inning with a fly-out to deep left-center. However, he pulled up lame, rounding first base and was immediately lifted from the game. The word is that he did something to his groin; we'll see what happens, but I imagine the team will be pretty cautious. No point risking anything more serious at this point in the season. Mitch Haniger moved over to center field, and Kyle Jensen came in to play left-field. As we'll see shortly, that move ended up working out quite well for the Diamondbacks.

Before then, however, Brandon Drury gave Arizona the lead. With two outs in the bottom of the second, he homered to center, scoring himself and Paul Goldschmidt. The ball just crept over the fence into the glove of a fan in the front row, and the Giants saw fit to challenge the call. However, the decision stood, and Drury had his 11th long-ball of the year. Next time up, Arizona repeated the medicine, with another dose of two-out, two-run medicine, this one off the bat of Kyle Jensen, for his first major-league hit. That put the D-backs 4-1 up, and with the Mets and Cardinals both winning, the Giants' wild-card position was looking tenuous.

However, they responded in the fourth inning, as the curse of the visiting sportsman continued. Remember Larry Fitzgerald, and the awkward football talk in the booth, as Zack Greinke self-immolated on Opening Day? Tonight, it was Shane Doan of the Coyotes who was the guest kid-caster as the Giants rallied, getting a one-out walk against Braden Shipley, who had relieved De La Rosa, followed by a trio of consecutive hits, to score twice and pull within one. Shipley escaped with a the lead intact by fanning Madison Bumgarner with one out and men on second and third, before getting a fly-ball to end the inning.

The Giants did tie things up in the next even inning, however - mostly thanks to Chris Owings. On a ball hit sharply up the middle, his throw sailed wide of Goldschmidt and into the visitor's dugout, to put the lead-off man for San Francisco on second. A bloop single = tied game, though Owings somewhat redeemed himself by starting a good double-play on a slow roller later in the inning. Edwin Escobar got the final out of the sixth for Arizona, but then surrendered a lead-off home-run in the top of the seventh, giving the Giants the lead again. Chip Hale entered Bochy mode, using Escobar, Randall Delgado and Steve Hathaway that frame.

Another Arizona player entered the treatment room in the bottom half of the inning. Chris Herrmann walked with one out, and slid awkwardly into second, apparently jamming his hand. Turns out he broke two bones in it, and is done for 2016. The steal became irrelevant, as Owings cranked one to CF, which the Giants' fielder butchered so badly, Matt Williams decided to wave Owings around third in an attempt to score the go-ahead run. It didn't work, and Owings was out at home. It wasn't actually very close either, as the screenshot below shows, St. Buster receiving the ball as CO approaches. When you're out by that much, it probably wasn't a good send.

Perhaps it was also Big night, with Chip Hale and Bruce Bochy swapping bodies. Because it was Hale who was wearing out a trench from the dugout to the mound, making pitching changes. The previous record number of pitchers used in a game by the D-backs was 10, back in September 2006 - and that was a sixteen inning contest. Tonight's game was twenty-five percent shorter, but the team still managed to use a full dozen, including the major-league debut of Matt Koch in the 11th inning. But before we got to that point, we had to endure a dramatic 10th frame.

Daniel Hudson got the first out, but Zack Godley failed to retire any of the three batters he faced, on a walk, a double and an intentional walk. Patrick Corbin got the first out with a hard grounder to Jean Segura for the force at home, and was replaced by Enrique Burgos. Burgos's control problems continued, as he uncorked a wild pitch - the team's fourth with the bases loaded this season - allowing the Giants to score the go-ahead run. He then got a strikeout and an infield pop-up, but it appeared that the damage had been done, with the D-backs now down to their final three chances.

With one out, Jake Lamb came in to face the Giants' struggling closer Santiago Casilla, against whom he was 3-for-7 with three home-runs. Inexplicably, the master of match-ups Bruce Bochy left Casilla in, and the inevitable happened. Lamb's 28th home-run of the season, making him 4-for-8 with four home-runs against Casilla. Goldie then singled, and stole second, for his 24th SB of the year. Before this year there had only been one 1B in baseball history with as many stolen bases and as good a SB% as Paul - Gregg Jeffries, who had 46 in 55 attempts for the 1993 Cardinals. This year, there are two in the NL West: Goldschmidt and Wil Myers (24 of 29 for the Padres).

Paul was stranded at third here, and so it was onto the 11th. Matt Koch's debut didn't start too well, as he walked the first two batters he faced. However, he recovered well to retire the next three batters, with the help of Goldschmidt nailing a runner at home. The D-backs had their chance to walk it off in the bottom half. Brandon Drury singled to lead off the frame, then took second on a wild pitch, and advanced to third on the first out, a fly-ball to right-center by Mitch Haniger. However, Phil Gosselin struck out, swinging at ball four, and Jean Segura wasn't able to get the winning run home either (ending the night 0-for-6).

The 12th inning saw the Diamondbacks' 12th pitcher, and it was Dominic Leone. Was anyone at all surprised by what happened next? A lead-off walk was followed by two hits and the Giants took the lead once again. This time, the D-backs were unable to rally, despite consecutive one-out walks, as Bruce Bochy send his RHP to the outfield for an out, so he could use a lefty. Welington Castillo was ejected after a somewhat dubious strike three - not the worst, but just one of many extraordinarily incompetent calls from home-plate umpire Dale Scott tonight, of which this was probably the most egregiously awful.

Yasmany Tomas grounded out, and the game was finally over. I'll admit, this wasn't a loss that stung. Those where you come back to make the opposing closer blow a save feel more like house money thereafter. But it would have been nice if the players had got to decide it, rather than shitty officiating playing a significant role. Owings, Tomas and Drury each picked up two hits, while Goldie reached base three times on a hit and two walks. But the D-backs still dropped their fourth in a row, in a contest which, at 5:23, fell two minutes short of the longest games this season. Arizona are now 0-3 in 2016, when games go more than five hours... 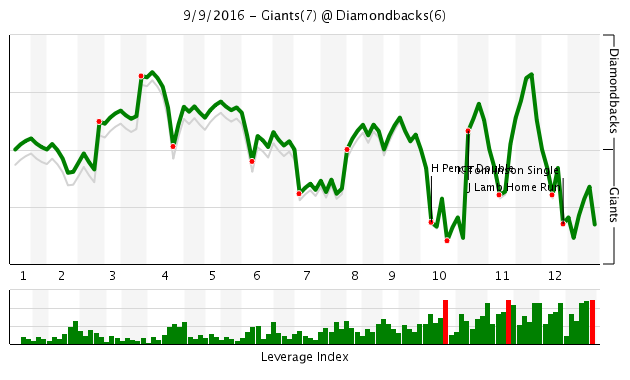 SongBird just edged out gamepass 58-57, with Justin27 and GuruB also reaching fifty comments. Others present were: AzRattler, Diamondhacks, I suppose I'm a Pessimist, Jackwriter, Jim McLennan, Makakilo, MichaelMcD831993, MyTop5, Oldenschoole, RobertMerrill, asteroid, coldblueAZ, imstillhungry95, onedotfive, shoewizard and tucsondbacks. Much though I'm tempted to award it to myself for this Tweet, Comment of the Night goes to the one Sedona Red comment, from Michael, after Pollock's exit - though it sums up most of the five or so hours that followed, too:

Back at Chase tomorrow, hopefully for a game that doesn't last as long. Johnny Cueto takes on Archie Bradley, and at least it's a 5:10pm start, so it can go seven hours without bleeding over into the next day, like this contest managed to do!