No Paul Goldschmidt, Jean Segura or Yasmany Tomas in the starting line-up today. So what did the D-backs do? Tie their season high for hits, of course.

The D-backs had 18 hits twice before this year: on April 25 against the Cardinals, and four days ago, in the 11-inning victory over the Braves. But both of those, more or less,. had the A-lineup in operation. If you looked at the card filled out by Chip Hale this afternoon, which included Phil Gosselin batting lead-off and playing first-base, as well as Rickie Weeks' Jr batting clean-up, I doubt you would have predicted a further 18-hit game, especially on the heels of last night's feeble hitting. Such is the joy of baseball, of course: the same two teams can play on consecutive days, and the results are often utterly different.

Here, for example, Arizona surpassed their hit total from all of last night in the first inning. Gosselin, Michael Bourn and A.J. Pollock singled to load the bases with no outs against Homer Bailey. It must have been particularly gratifying for Pollock, it being his first major-league hit since coming back from that fractured elbow. Groundouts from Weeks and Welington Castillo followed by an RBI single from Jake Lamb made it 3-0 to Arizona. Lamb took second on a wild pitch, then scored on a Brandon Drury single. The Reds' catcher dropped the ball on the play, but picked it up and somehow managed to sell the home-plate umpire, who called it out. Thank heavens for instant replay. 4-0 Diamondbacks.

The game looked like it might turn into a bit of a barn-burner, as Archie Bradley didn't exactly have a shutdown inning after his team gave him the lead. He allowed back-to-back homers to Cincinnati with one out in the second, putting the Reds within two, but settled down. In fact, with the help of a double-play. he faced the minimum three batters in every other inning Bradley pitched. Archie ended up going six, allowing two runs on five hits with three K's. Particularly key: he walked none. The only other major-league start where he's done so, was the 1.1 inning one against Colorado where he blocked a line-drive with his face. This one ended better, I think it's safe to say.

Not content with getting his first hit, Pollock picked up his second in the third, leading off with a single. This was rapidly followed in quick succession by his first steal (second base), second steal (third base) and first run, coming home on a sacrifice fly by Castillo. Another productive Castillo at-bat in the fifth drove in Michael Bourn with a single, and the game was blown open in the sixth. Drury and Chris Owings singled to lead-off, and Yasmany Tomas came off the bench to hit his first ever pinch-hit home-run, a three-run shot. That gave him a team-leading 27 long-balls for the season. Anyone predict he'd be leading the team at the end of August?

Tomas has had a really weird season in terms of home/road splits. Through the end of July, he had 17 home-runs, but only three of them were at home. However, all ten of his home-runs in August have come at Chase Field. Per Stats Inc, he's the first NL player to hit ten homers in a month at home since (probably inevitably) Troy Tulowitzki did it in September 2010. Patrick Corbin, meanwhile, became the 10th Arizona relief pitcher to drive in a run, and first since Trevor Cahill in August 2013, with an eighth-inning single. Castillo followed with another RBI hit, to end the day with four runs driven in.

Corbin hit because he worked the final two innings - with a seven-run lead at that point, Chip Hale didn't need to burn another relief pitcher. Corbin put up a pair of zeroes, with Jake Barrett working the seventh, the pair combining to retire all nine batters faced, with four strikeouts. As you'd expect, a lot of offense to go around this afternoon. Weeks was the only starting position player without a hit. There were three apiece for Bourn, Pollock and Owings, two each from Drury and Gosselin, and Castillo reached base three times, on two hits and a base on balls.

The day after allowing 16 hits and getting four, Arizona got 18 hits and allowed five. So, yeah: turnabout IS fair play. Blowout wins like this have been rare, though this afternoon did match the nine-run margin against the Mets on August 11, when we beat them 9-0. But you have to go all the way back to May 12 to find anything larger, the 12-2 thumping of the New York Yankees, which remains the only double-digit margin of victory managed by Arizona this year. On the other hand, there have five defeats by 10+ runs, most recently last night's loss which I'm sure you've probably already forgotten! 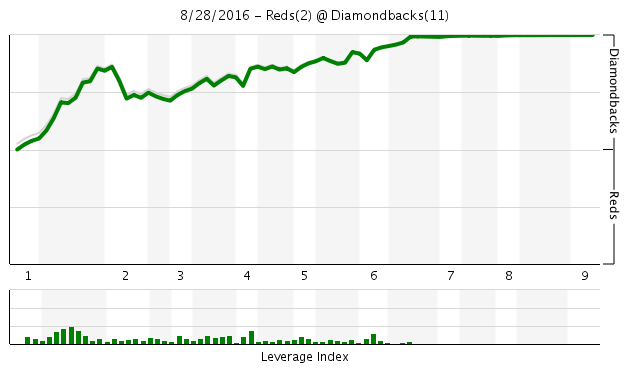 Yeah, payback is the theme for your Win Probability today. A surprisingly sprightly Gameday Thread, considering there was also an Arizona Cardinals game on: probably helped that they sucked. Those to be found in it were: AzDbackfanInDc, GuruB, Jackwriter, Makakilo, MichaelMcD831993, MrMrrbi, SongBird, asteroid, coldblueAZ, gamepass, noblevillain, onedotfive and thunderpumpkin87. Comment of the Thread goes to the Tweet posted by GuruB. Any anti-wave rhetoric will always be looked upon favorably in these quarters...

A day-off for the Diamondbacks tomorrow, so I don't know what I'm going to do with myself tomorrow night. Probably pretty much what I did with myself this afternoon, to be honest... Play resumes on Tuesday in AT&T Park, with what looks like it'll be a good pitching match-up, Zack Greinke taking on Johnny Cueto there. At least it'll be a relatively happy flight for the Diamondbacks to San Francisco!