The advantage of not attending games is, when one like tonight happens, you can just go do something else. Thus, we turn for help to the brave input of @desertopus, who stuck this one out at Chase until the bitter end...

The combination of a pullover giveaway and the Alumni Game clearly proved an attractive one, drawing 34,395 people at Chase Field this evening. That's the fourth highest attendance of the year for the Diamondbacks, trailing only Opening Day, the Fourth of July, and the Luis Coronel concert on July 16. A good performance by the team would have perhaps helped to neutralize the stench of the season, and an abysmal home record. Instead, the D-backs went down to one of their biggest blowout losses in franchise history. The only larger margin of defeat in a shutout was a 14-0 drubbing to Atlanta in July 2007.

And it started so well too, with an Alumni Game which seems to have been thoroughly enjoyed and appreciated by all those present. Well, except J.J. Putz who pitched a stinker for his team, and Team Purple cruised thereafter to a 5-2 victory over Team Red.

@AZSnakepit I'm both amazed & pleased with the size of the crowd here now & not just for pullovers pic.twitter.com/zYDIJ5hOhj

Then, the actual game started and it was downhill virtually from the get-go. Three batters into the game, Zack Godley gave up a two-run homer to Joey Votto. By the time he escaped the top of the first, the Reds had doubled that lead, and things somehow managed to get even worse in the second inning. Godley allowed five more runs there, and that marked the end of his night. His season ERA is now 6.71, and as a starter, it's worse still - 7.31, which is now higher than Shelby Miller's number for the year (7.14). It could be Miller replaces Godley for his next start, though since it's scheduled to be in Coors Field, the team might keep Godley in there for that.

@AZSnakepit Festivities leading up to this game were grand, then the current Dbacks took the field

Alternatively, it's not impossible, as Michael suggested, that we use Vicente Campos as a stop-gap there. He came in to make his major-league debut, doing mop-up to save the bullpen, and didn't seem overawed by the occasion. He ended up throwing 5.2 innings. There have been only three longer Arizona relief outings, and one of those (the Randy Johnson 7 IP one) shouldn't really count. Even more impressively, there has been only one longer NL debut relief outing since 1980. Kris Johnson tossed six innings for the Pirates in August 2013, working the 11th through 16th innings of a game against the Diamondbacks.

@AZSnakepit Under the circumstances, Campos does an admirable job going 5.2 innings, giving up 3 runs, 2 earned; only negative is 2 HR's

You can perhaps understand the offense not exactly putting more than the minimum of effort in, when the Win Probability was reduced to 2.2% by the middle of the second inning. But, boy, this hardly even counted as a token gesture. It has been feast or famine for the D-backs of late. In the past 11 games, they have had a dozen or more hits on five occasions - and less than six on another five. Tonight was firmly in the latter category, as Arizona managed only four hits, all of them singles, and one walk. We had one at-bat with a runner in scoring position, Campos lining out in the bottom of the fifth after Yasmany Tomas and Tuffy Gosewisch had singled.

It turned into more of a spring-training game, as the Diamondbacks pulled Jean Segura, A.J. Pollock and Paul Goldschmidt from the game. Segura apparently left due to "illness," and if I'd been at the game, I would probably have been gnawing one of my own limbs off, in order to escape. None of which stopped Cincinatti's Anthony DeSclafani, who tossed his first career shutout, and needed only 108 pitches to do it. It has to be said, it was a remarkably brisk contest, despite the (one-sided) offense. Two hours and 32 minutes made it the fourth-quickest game of the season.

@AZSnakepit On the plus side, Butcher has only made one appearance which probably contributes to the pace of this blowout

There have been bigger margins of defeat this year, but I think this was probably the most entirely one-sided game of the year. It was all but over before Goldschmidt got his first turn at the plate, with the team already nine runs behind. It's a real shame the large and enthusiastic crowd on offer were not given a performance by the home team appropriate for their presence. If this evening was your first (or last) time at Chase Field this season, would you be interested in coming back to see the Diamondbacks again? All the triple-play sundaes in the world can't make up for a game which would have been mercy-ruled after four in the Little League World Series.

@AZSnakepit Hope these help out, will sum up game with quote from kid next to me saying as he left, "Well that sucks!" 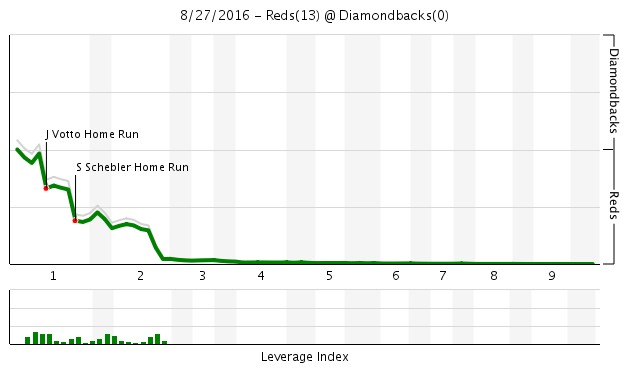 The rubber game tomorrow, sees Archie Bradley take the mound for Arizona. At least it can't go any worse than this, can it. Can it?