Arizona's last three wins have all been walk-offs after blowing ninth inning leads. This is not likely a long-term recipe for success...

Share All sharing options for: Diamondbacks 4, Reds 3: Of Braden, balks and bad bullpens

The first eight innings here were kinda boring, to be honest. Then it got... interesting. Not necessarily good, in the sense of fundamentally sound baseball, I should stress. But the results were certainly interesting. It felt like watching a movie adapted from the works of Jane Austen, where someone had spliced in a final reel taken from a seventies Italian cannibal movie. You may not necessary want to see anything like this ever again, but you'll probably remember this contest rather longer than most of the others played by the Diamondbacks this year.

Let's get the dull bit out of the way first though. While Braden Shipley and Brandon Finnegan took diametrically opposed approaches to pitching, both were pretty effective. Shipley was missing the strike-zone a lot (55 strikes, 43 balls) yet was getting the Reds to hit it on the ground, with a GB/FB ratio of 13:7. He was certainly helped out by his defense, with some good plays in the outfield, and a BABIP of .174 is likely not sustainable. Walking four batters and striking out one is not going to work either. However, the bottom line is seven innings of one-run ball on four hits for Braden, a good bounceback outing.

Meanwhile, the Diamondbacks were simply having trouble making contact against Finnegan. He struck out the side in the first, and of the first 10 Arizona batters retired, eight were by the K. However, the team managed to stay in the game, largely courtesy of Rickie Weeks Jr. After the Reds had taken the lead in the top of the second, the D-backs answered back. This started with a one-out triple from Weeks, after Billy Hamilton misplayed a ball off the center-field wall. One more out later, Brandon Drury grounded one off the third-baseman's dive to the shortstop; it would have been a bang-bang play at first, but Joey Votto dropped the ball, making it an RBI infield single.

Weeks then did it all himself his next time up, blasting his ninth home-run of the season an estimated 423 feet to left-center. That lead then stood up through the end of the eighth. The closest the Reds came was probably in the sixth, when they got back-to-back hits leading off the game, before Shipley dialed up a tailor-made double-play ball to help stifle the threat. After he left the game, we turned to Chip Hale's new-style "experienced" bullpen of Randall Delgado and Daniel Hudson to protect the lead. It started off well enough, Delgado working a scoreless eighth, albeit with two men stranded on base.

That's when the romantic stylings of life among the British landed gentry at the end of the 18th century, suddenly turned into savages munching on intestines.

Daniel Hudson hadn't saved a game since June 21. Sadly, Daniel Hudson still hasn't saved a game since June 21. He got the first two outs easily enough, getting a ground-out and a K on eight pitches. However, the third out required five more attempts and 24 additional pitches. Twice, the Reds were down to their final strike, but a pair of full-count hits, around a first-pitch knock, tied things up. Hudson, however, shouldn't feel too bad: as shown below, one at-bat featured what should have been a strike three call, blown by home-plate umpire Gerry Davis, and the subsequent hit came on a swing more fortunate than anything, at a pitcher's pitch outside the zone.

This game should be over pic.twitter.com/286bZFtjWU

There was no bottom of the ninth heroics tonight, so it was into extras. Enrique Burgos took over, and it wasn't long before Mrs. SnakePit was asking, "Why does he keep doing that? Why don't we have good pitchers?" With one out, the Reds' hitter bunted against the shift - I'm really surprised we don't see that more often (we saw Joey Votto try it earlier in the game), then Burgos allowed another single, and committed a balk that advanced the runners to second and third. That proved key, as a sacrifice fly then scored the go-ahead tally for Cincinnati, though Yasmany Tomas turned it into an inning-ending double-play, firing to third to get the runner trying to advance there.

in the NL this year, there has been about one balk every 279 innings thrown. So, with one having led to the go-ahead run in the top of the tenth, what are the odds a balk would also lead to the tying run in the bottom of the tenth? Because that's what happened. Phil Gosselin walked with one out, advanced to second on a wild pitch, and the Reds pitcher then basically fell off the mound, advancing him to third. A.J. Pollock then chopped one over the mound and although the Cincinnati infielder fired home, Gosselin was able to slide around the tag, and the game was tied once more.

That made Pollock the potential winning run at 1st, and it would have been epic had he scored the walk-off run. It looked distinctly plausible, when Paul Goldschmidt singled through the hole, pushing A.J. to second, but Welington Castillo and Michael Bourn (the later having come in as a defensive replacement, and done his part with the glove) were unable to make it a memorable 2016 debut for Pollock. Left-hander Edwin Escobar then came in to work the top of the 11th, even though he faced almost entirely right-handed batters. He did the job though, albeit leaving two more Reds on base.

Next up would have been the major-league debut of Vicente Campos. However, that was not to be. With one out, Brandon Drury hit a hard chopper onto the ground by home-plate, which then blooped delightfully over the grab of the third baseman, for a double. Drury advanced on a Chris Owings ground-out, but the D-backs bench was getting perilously thin, and the pitcher's spot was up. The .159 hitting Tuffy Gosewisch strode to the plate... And drew his third walk. of the year. Next: Jean Segura. However, it didn't matter who was up, as the pitcher spiked his delivery, the ball fizzed to the back-stop and Brandon Drury slid home safely for the first walk-off wild pitch in team history.

It wasn't pretty but it was a win. All of Arizona's hits tonight came from three players: Drury had three, while there were two apiece for Goldschmidt and Weeks. Castillo drew a pair of walks. But not a great night for the Arizona bullpen, who worked a total of four innings, allowing eight hits and two walks - that could have led to more than a pair of runs. For the Reds bullpen also allowed two runs over 4.2 innings, on only four hits and three walks. 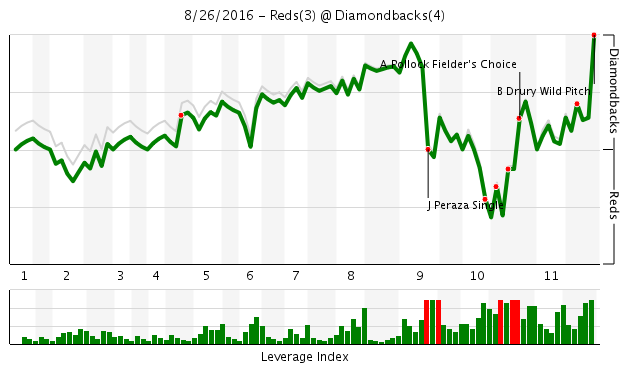 I think that covers everybody... MichaelMcD831993 powered the GDT, ahead of Jackwriter, with GuruB in third. Also taking part were: AzDbackfanInDc, AzRattler, Clefo, Diamondhacks, GuruB, I suppose I'm a Pessimist, Indedave, , James Attwood, Jim McLennan, JoeCB1991, Makakilo, Xerostomia, asteroid, coldblueAZ, gamepass and shoewizard. With no Sedona Red comments, I'm exercising executive privilege and awarding it, ironically, to Jackwriter for his reaction to Shipley allowing a hit in the second inning:

Party over for Shipley?

by Jackwriter on Aug 26, 2016 | 6:57 PM reply rec flag actions
Apparently not. We'll actually be hoping Zack Godley can pitch as well tomorrow. Which will also be the Alumni Game, so we may get the thread up early for that one. Or we may not. It probably depends on what I'm doing. But if we can win in a less dramatic fashion, I probably wouldn't mind.