An irritating loss this evening, as the D-backs split a series with the NL worst Braves at home.

Share All sharing options for: Diamondbacks 1, Braves 3: Wisler's a mother...

Part of the annoyance is being able to see the potential in Robbie Ray, which is so damn tantalizing. Any pitcher that can strikeout hitters at such a high rate should, by all standards, be utterly dominating. Look at the other qualifying starting pitchers who have K-rates of more than 11 per nine innings, as Ray does (11.23 per nine, to be exact): Jose Fernandez, Max Scherzer, Stephen Strasburg and, if he wasn't injured, Clayton Kershaw. That's some pretty exclusive company, and could well be a short-list of Cy Young contenders. But that list would not include Ray, who is now 7-12 with a 4.28 ERA.

Tonight, he went five innings, throwing 108 pitches. It's the 11th time in 26 starts he hasn't recorded an out in the 6th inning, and the fifth time it has taken Ray over 100 pitches to get that far. There was some suggestion he was being squeezed, particularly at the top of the zone, by the home-plate umpire, but the pitch f/x strikezone plot suggests there were probably only a couple of balls which should have been called strikes. It seemed to be Ray's standard problem: an inability to put people away. And after throwing first-pitch strikes to the first six batters faced, he seemed to abandon that approach, going just 7-of-18 the rest of the way.

The third inning was where the Braves did all their damage against Ray, beginning with three straight singles to lead off the frame, ending in an RBI double. Given that, limiting them to a pair of runs was probably about the best that could be expected, but it was a 28-pitch inning that was, effectively, the death knell for Ray going deep into this game. He ended up going five innings, and was charged with two runs on six hits and four walks (one intentional), with seven strikeouts. That gives him 181 K's on the year, the most by a D-back at this point in the season since Randy Johnson in 2004 (227). Mind you, by this point in both 1999 and 2001, RJ was past 300 strikeouts...

The D-backs bullpen had one of their better outings, giving up only an unearned run over their four innings of work. New arrival Silvino Bracho worked two frames, and was the victim of a Chris Owings throw, that let his opposite number Dansby Swanson reach base. This may have been polite shortstop payback for a Swanson error that let Owings reach base the previous inning. I appreciated that one, because it reduced by at least 50% the amount of gushing occurring on social media, over any more than completely routine plays made by Swanson. Unlike Owings, who was erased on a double-play, he came around to score, though Bracho limited the damage.

Jake Barrett and Daniel Hudson then finished things off, Hudson looking particularly solid in a 1-2-3 ninth with one strikeout. That's eleven consecutive outings for Huddy without allowing a run, over which time his season ERA has dropped from 7.22 to 5.98. Even if he continues to pitch well, it probably isn't going much below five, but I'm more interested in seeing if he will be an asset for the Diamondbacks bullpen in 2017. Seems, that he'll be getting his chance to claim the closer's spot, perhaps with Randall Delgado as set-up man. Be funny if we end up with the only two experienced relievers in those roles. Perhaps there's something to that whole "closer's mentality"?

Offense was next to non-existent. The biggest noise made over the first six innings was probably the crash made by Braves' first-baseman Freddie Freeman, trying to chase a foul-ball down, and instead toppling over the railing and crashing down into the sunken seats, back first onto a chair, then to the floor. Damn. I was surprised he managed to get up under his own steam after that, let alone stay in the game. I'd have been taking the rest of the night off, I think. Thank heavens for the low attendance (18,698), as I'm sure a rapidly descending Freeman would have inflicted sufficient damage on any poor occupant of those seats.

The Diamondbacks were no-hit through six innings, and it took an appearance from St. Penelope on social media, to remind them about the purpose of those wood things they were carrying. Paul Goldschmidt singled, leading off the seventh, and with Jake Lamb drawing a walk, the D-backs had the tying run at the plate. However, they were unable to do much more beyond generating a couple of productive outs, with Chris Owings ending the shutout on an RBI groundout. Jean Segura's single with two outs in the eighth was the only other hit managed, though Goldy did at least make a fight of it with an 11-pitch groundout, leading off the ninth. 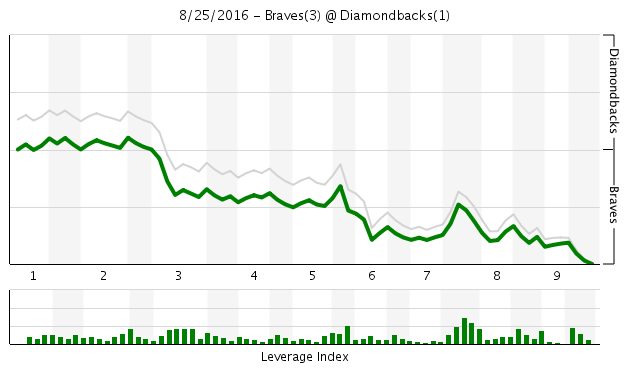 I've been to his house.

It’s walls are lined with gold. It’s floors are walk on aquariums filled with piranhas and Dodger fan blood. His kitchen? A butcher lives there 24/7 on call and will slaughter, cut, and grill anything at anytime. Don’t get me started on the bathroom. You pee in a custom waterfall. Poop? No one poops at Jims house. Ever. The bedrooms are mansions all in their own. The beds are piles of top notch mattresses coated in exotic, UN designated endangered bird feathers.
You better beg, and come up with more than 2g.

If you'd have been a dog.....
They would of drowned you at birth.

The team awaits the arrival of the Cincinnati Reds for a three-game series that starts tomorrow night at Chase Field. Braden Shipley starts for the Diamondbacks.