Diamondbacks 1, Padres 9: No offense - none taken

For about three innings, Arizona were in this game. But it became steadily more apparent, this was not to be.

Share All sharing options for: Diamondbacks 1, Padres 9: No offense - none taken

If you're paying attention to the above, it's worth noting that after 124 games last season, the Diamondbacks were at .500. Indeed, Game #124 was a loss to St. Louis, the team having actually been above .500 before that, thanks to a sweep of the Reds. You probably remember that point in the season. The D-backs returned from Cincinnati still on the fringes of the playoff hunt, five games back of the Dodgers, and prompting articles such as Are the 2015 Diamondbacks contenders or pretenders? Of course, we promptly got swept by the Cardinals and lost eleven of our next fourteen games. It  was nice while it lasted.

But it was still rather better than the situation this season. Arizona came in to San Diego with a shot at escaping the basement of the National League West for the first time since before the All-Star break, their record tied with the Padres. But instead, they dropped three of four, being outscored by a 26-15 margin, and find themselves once again looking up at the rest of the division. There's not even the faintest illusion of contention. The only source of excitement left the rest of the way for the franchise, is instead deciding precisely what spot the D-backs will get to pick in next June's draft.

Which brings me nicely to Tankapalooza 2016. Today's defeat means the Diamondbacks would currently get the third pick in the draft. Their 51-73 record is two games back of the Minnesota Twins, who lost this afternoon, and six behind the Atlanta Braves, who walked off the Nationals 7-6 in 10 innings (Dansby Swanson: 0-for-4 with a pair of strikeouts  You might as well get used to this narrative now, because it's going to be crammed down your throat for the next four days). Atlanta are the next team we play, another four-game set starting there tomorrow night, so there is potential for significant movement in the standings. Or we could just split the games and not move at all.

As for today's game, this was the kind of contest where no-one would blame the recapper for doing something else this afternoon, recording the game instead and flipping through it on fast-forward, looking to find a few highlights. I know I certainly wouldn't blame anyone for taking that approach. Braden Shipley certainly seemed in a hurry to get out of there, with a little help from the San Diego hitters. The first inning he threw lasted five pitches. The second inning was, by comparison, a marathon of effort, requiring 10. By the time the opposing pitcher popped up a bunt attempt to end his first time through the order, Shipley had needed only 22 pitches for nine PAs and eight outs.

Unfortunately, his second time through the order proved a good deal less efficient and successful, beginning with the lead-off hitter cranking a two-run shot deep into the right-field bleachers. That second run through resulted in three hits, all of them for extra-bases and four runs driven in, including an RBI double to the pitcher. That was the 11th extra-base hit allowed to a pitcher this year by Arizona, tied for the major-league lead (with Los Angeles, oddly). Shipley was certainly attacking the strikezone. He threw strike one to each of the first 14 batters he faced through four innings, and 20 of 24 all told. But there were just too many hittable pitches.

The Padres scored two in the fifth, and three more in the sixth, the latter chasing Shipley from the mound. Chip Hale didn't help Braden's line by using human white-flag Dominic Leone, who inevitably allowed the inherited runner to score, though stranded two more of his own in scoring position. Still, that left Shipley in full, earned possession of all seven runs scored by San Diego, on seven hits and a walk with five strikeouts. He only needed 85 pitches, true; however, this is a good demonstration that pitching efficiently does not necessarily mean pitching well. His season ERA is now 5.45, so expectations based on a sub-three figure through four starts, have now left the building.

Meanwhile, the offense was apparently already in the departure lounge at San Diego International Airport, sipping a latte and wondering if they can get a seat next to an electrical outlet. The Diamondbacks managed only five hits, all of them singles, and no walks. We didn't get a runner past first base until a throwing error by the Padres' pitcher with one out in the seventh, allowed Phil Gosselin to reach second. Brandon Drury then ended the shutout with his second hit of the day, an RBI single, but it wasn't even an earned run. The low-point of the series may have been reached in the eighth, when something hairy called Quackenbush struck out the Diamondbacks.

Patrick Corbin worked the last two innings in mop-up. The first went well, but he ended up allowing two runs in the second frame, on a total of three hits and a walk with two strikeouts. Since leaving the rotation, he has given up five earned runs over 4.1 innings of work, on six hits and three bases on balls. Unlike Rubby De La Rosa, it doesn't appear a quick return to the rotation is in Corbin's future. 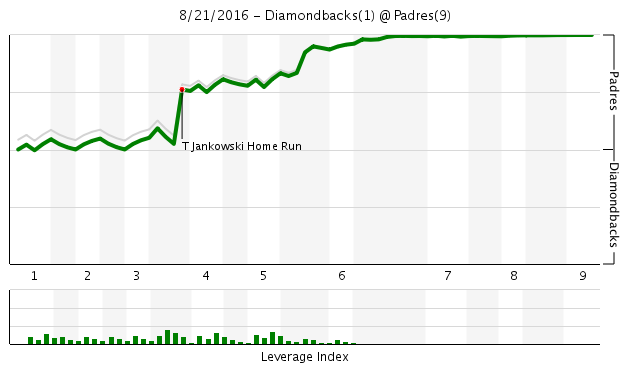 Drury was the only Diamondback in positive territory this afternoon. A largely flat and disinterested Gameday Thread, but I'm certainly not blaming anyone. Those present were: AzDbackfanInDc, GuruB, Jackwriter, Jim McLennan, JoeCB1991, Makakilo, MichaelMcD831993, MrMrrbi, Oldenschoole, gamepass, globaldistrust, hotclaws, makattack71 and noblevillain. Comment of the thread to hotclaws, who summed up this series perfectly in seven words.

So, it's back to Chase Field, and the arrival of the Atlanta Swansons, arriving in a Antonov An-225 fully laden with hot takes and narrative. At least this means a return to reasonable start times. Tomorrow night's game is a 6:40pm, with Zack Godley starting for the Diamondbacks.