When Jake Lamb went down for a few days in Milwaukee with a bruised left hand, the Diamondbacks were forced to alter the lineup to generate more offense and they moved Jean Segura to bat 3rd. Although he performed okay there, it sure is great having him hit leadoff.

Segura took the 3rd pitch of the game, a Scott Kazmir 0-2 fastball on the inside of the plate, over the left field fence to put the Dbacks ahead 1-0. Side note, Segura has 4 leadoff homeruns this year, tied for 3rd in the National League. The rest of the inning ended without much excitement. Bring out the rookie Braden Shipley, making his second major league start.

Shipley began strong, inducing outs from Utley and Seager. He did give up a double to Justin Turner, who moonlights as the Wyndham Rewards Wizard, (really, check out the resemblance) but was able pitch around a walk to Adrian Gonzalez and get Howie Kendrick to ground out

The Dbacks offense got right back to work in the top of the 2nd, with a leadoff double by Yasmany Tomas and a cued off-the-end-of-the-bat double by Chris Owings, cscoring Tomas. After Shipley struck out, Segura stepped in and continued his pull power by ripping a double into left field, scoring Owings. Dbacks ahead 3-0.

Innings 3-6 were pretty status quo. Both pitchers controlled the offenses and this segment of the game proved to be a great time to make and eat a sandwich. Moving along to the 7th inning. Will we see the same insanity that prevailed last night? Gee I hope not...

Phil Gosselin bats for the pitcher Shipley and the rookie's night ends with him throwing 106 pitches, getting 11 ground ball outs, and tossing six shutout innings. A great bounce back performance after his debut a few days ago. Braden, way to right the Ship(ley). I know that's a lame joke. I regret nothing.

Gosselin does what is quickly becoming his signature hit and lines a double to right field. The dodgers promptly brought in a reliever who promptly hit Segura with a 96 mph fastball in the back of the arm. This is getting old. Ugh. I'll save my rant about this for another time. Brandon Drury then stepped in and stepped up, lining a 2 out single to right, scoring Gosselin. Dbacks ahead 4-0.

On to the bottom of the 7th and the Dbacks turn the game over to the pen. Enrique Burgos gave up an RBI single to Scott Van Slyke who I am convinced only hits against the Diamondbacks. 2 games into the series and there has been 7th inning drama both nights. To be continued tomorrow afternoon. Dbacks ahead 4-1.

Jake Barrett (Go Devils) came in and completed the 4 out save while also serving up a solo home run to Joc Pederson in the final frame. Final score Dbacks 4, Dodgers 2.

Great games by Shipley and Segura put the Dbacks in a position to win the series tomorrow. 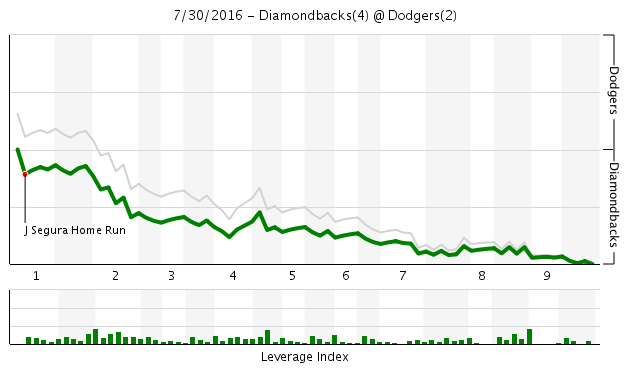 It was actually a well played game by the DBacks!

So, there will be a rubber game tomorrow afternoon at Dodger Stadium, to see if Arizona can take a second consecutive series from Los Angeles. Which would be nice. On the other hand, keep those expectations reined in, since Patrick Corbin is taking the mound. He hasn't won a start since June 21, and in July is 0-3 with a 6.57 ERA. But, hey: you never know... 1:10pm first pitch for that, and I hope it doesn't go extra innings, since there's a family dinner scheduled and I'm recapping! Thanks to Chandler for the guest recap tonight.