Normal (poor) service at Chase Field has been resumed.

Robbie Ray had the most Ray-esque of first innings. After striking out the Giants' lead-off guy, then going 0-2 on their #2 hitter, he allowed two singles sandwiching a four-pitch walk, to load the bases with one out. Ray rebounded, getting a strikeout and weak ground-ball to escape the inning with a zero. However, it was a zero which required 26 pitches to be thrown. He did rebound with a nice 1-2-3 second inning, and by the end of two, had actually thrown fewer pitches than his Giants counterpart. This was partly because Arizona had taken the lead in the bottom of the second, as Brandon Drury and Phil Gosselin banged consecutive doubles off the left-center wall.

The D-backs could have scored more, but wasted the opportunity of men on the corners and one out. Although Ray was able to bunt the trail runner over into scoring position, Jean Segura flied out to center. That failure came back to bite Arizona immediately. The top of the San Francisco order virtually repeated the first inning: a leadoff out was followed by the bases being loaded. But this time, instead of making the final out, Mac Williamson knocked the first pitch he saw from Ray, back up the middle for a two-run single. Another two-out hit, this one a double past the despairing dive of Brandon Drury in left-field then scored two more for the Giants in the fourth.

Of late, it seems that the Diamondbacks have been surrendering a lot of two-out hits and runs. However, it appears the splits are actually fairly even. Our pitcher's OPS with zero, one and two outs respectively, coming into this game were .785, .764 and .773, so not an enormous amount of difference. Through the end of today, 149 of 416 runs allowed have come with two outs. That's 36%, but you would expect more than one-third, because you've a much better chance of hitting with runners on base. It's exactly the same figure as the National League overall this year, so if it seems otherwise, it's just selective memory at work.

After stranding seven runners through the first four innings, Ray settled down and retired the final seven batters he faced, setting the Giants down in order in the fifth and sixth frames. That was the end of his day, with a final line of four runs over six innings, on eight hits, two walks (one intentional) and a hit batter. He struck out eight, extending his lead in that category for the 2016 Diamondbacks. He now has 108, seventeen ahead of the next most (Zack Greinke). His K-rate is an impressive 10.53 per nine innings. That's the best figure since Randy Johnson in 2004 (10.63). Johnson and Curt Schilling are the only qualifying pitchers to post a strikeout rate of 9.2 or above for us.

The Diamondbacks then started to claw their way back into the contest. Inevitably, Paul Goldschmidt was involved. Leading off the sixth inning, he knocked a ball high off the batter's eye in center field. It was initially ruled a double, even though replay showed it well above the yellow line. After gathering together, the umpires reversed the call, without even bothering to put on the headsets, and Goldschmdt had his 15th home-run of the season. With the Arizona bullpen stopping San Francisco from scoring, courtesy of Andrew Chafin, Jake Barrett and Daniel Hudson, we went into the eighth with the same game situation as yesterday: D-backs down by two.

And, hey, whaddya know, another blown save for the Giants! With one out, Goldschmidt hit it to Buster Posey, but the ball had some unexpected side-spin, taking a funny hop to the first-baseman's right, and Goldie reached. Next up was Jake Lamb, and Paul then easily stole his 11th base of the year to move into scoring position. Lamb decided that he was also in scoring position, and having worked the count full, knocked a pitch off the top off the fence in right field and into the first row of the seats there, tying the game up. It was his 19th home-run of the year, and made for a happy Mrs. SnakePit, who had Lamb and Goldie in her first day playing Beat the Streak. Only 54 more to go!

The Diamondbacks A-bullpen did its job, with Brad Ziegler and Tyler Clippard following Hudson in putting up a zero. However, the lack of depth we have was exposed in the 11th. Enrique Burgos came in, walked the Giants' leadoff guy, and then allowed an RBI double down the left-field line to score the go-ahead run. He prevented further damage, stranding a baserunner who reached third base with one out. However, the damage had been done, and San Francisco turned to their closer for the bottom of the 11th.

Yasmany Tomas led off with a single, was bunted over to second-base by Gosselin, and then took third on a wild-pitch. That meant the tying run was 90 feet away with one out. However, Brandon Drury hit the ball hard to third, and Tomas was not able to come home. Last night's hero, Welington Castillo, batted for Tuffy Gosewisch, and was pitched VERY carefully, walking on four straight pitches, to bring up pinch-hitter Peter O'Brien, who struck out against Santiago Casilla to end Friday night's loss. Unfortunately, the result was the same here, though at least he went down swinging, rather than been jobbed out of his at-bat by a crappy home-plate umpire.

Every position player had a hit today, with Gosewisch picking up a pair. Gosselin singled and walked. But the loss drops the D-backs home record to 14-30. 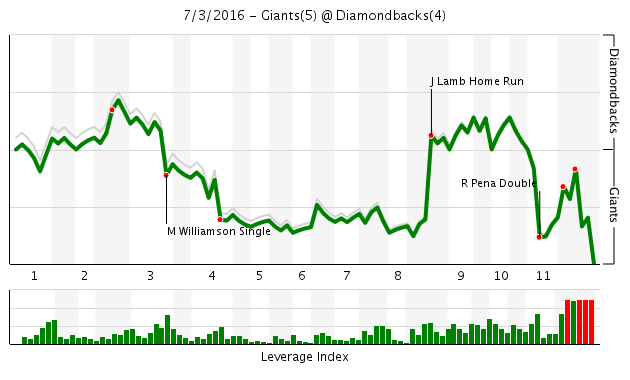 if Lamb launches one, dinner is on me

We await the arrival of the San Diego Padres to Chase, with the three game series starting tomorrow. Archie Bradley starts for Arizona, with a slightly-early first pitch at 6:10pm. So don't be late!