Share All sharing options for: Diamondbacks 9, Reds 8: Brunchcap at OHSO

Beer #5: a pitcher of Magic in the Ivy by Huss Brewing Co.

The D-backs didn't add any insurance runs in the ninth, and it very nearly cost them, as Tyler Clippard came in and went walk, walk, three-run homer. Suddenly the tying run was at the plate without Clippard having recorded an out. Given how he and Daniel Hudson have pitched of late, it's probably a good thing we traded Brad Ziegler earler, because our other relievers' trade value has been going south along with the team's overall record. Clippard recovered to strike out the side, though also walked the tying run on base, though since the situation was of his own making, does not get the save. He does get a positive WP though, since he ended the game... 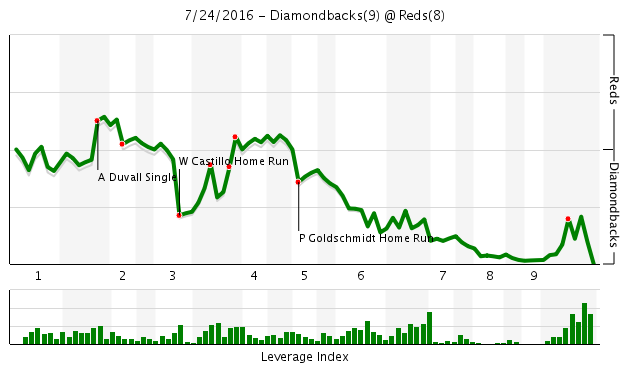 A brisk GDT, with more enthusiasm that we saw in the first two games. Those present were: AzDbackfanInDc, Diamondhacks, Gilbertsportsfan, GuruB, Jackwriter, Jean Genie, Jim McLennan, JoeCB1991, Makakilo, MichaelMcD831993, Oldenschoole, Re Tired, Toll Booth Willie, Xerostomia, coldblueAZ, hotclaws, ofinn28, onedotfive and repre. Still nothing more than a single rec though, so you'll have to do without a Comment of the Thread.

And so, it's on to Milwaukee for the D-backs, and tomorrow sees the debut of our top prospect, Braden Shipley. First pitch on that one is 4:20pm Arizona time.