The Diamondbacks came out of the gate, playing as if Chip Hale's job depended on it. Then the middle of the first inning happened.

Things started breezily enough for the Diamondbacks, with Jean Segura taking a 2-1 pitch and depositing it onto the batter's eye in center field, for his eighth home-run of the season, and his second bomb leading off a game. Only Chris Young (6) and Stephen Drew (3) have more in Diamondbacks' history. Michael Bourn followed up with a double, and came around to score on a Paul Goldschmidt ground-out and Welington Castillo sacrifice fly. Though Brandon Drury ended the inning, stranding Jake Lamb on third, Arizona had jumped out to a 2-0 lead. Could Archie Bradley respond with a shutdown inning?

Unfortunately, he couldn't even deliver a shutdown out. Reds' speedster Billy Hamilton led off with a single, then stole second, as Jean Segura couldn't get the tag down in time. That ended up costing the Diamondbacks, as a walk was then followed by a three-run home-run off the bat of Joey Votto. The two-run lead had become a deficit, before Archie Bradley retired a batter. Worse very nearly followed: he retired one of the first seven batters faced, to load the bases after the home-run with one out. Fortunately, he escaped damage thanks to a rare 3-6-1 double-play, Bradley sprawling to the ground to hold onto the return throw while feeling for the bag with his foot.

That was more or less the pattern for Archie's night, as he weaved his way in and out of trouble, bending without quite breaking. He stranded a man on third with one out in the second, then had men on second and third with one out in the third, and still put up a zero. Even though he had relatively clean innings in the fourth and fifth, his pitch count was still too high for him to go any further, as he had also struggled with his control. Bradley's night ended after five innings and 105 pitches; he was charged with three runs on five hits and five walks, with four strikeouts. But considering those three runs all came before his first out, it could have been a lot worse.

Things got a little fraught in the top of the third as Segura was hit, leading off the inning - his team-leading eighth of the year, and third time in his last 10 games. He seemed disgruntled by the experience and exchanged words with the Reds' catcher, who was pointedly standing between Jean and the mound. The umpires huddled together and eventually decided that warnings should be issued. Nothing further came of it, and nothing came of the leadoff runner either, as Goldschmidt hit into an inning-ending double-play.

Arizona's best chance to tie the game up came with two outs in the fourth. Brandon Drury walked, and Yasmany Tomas sent one to the gap in left-center. It's hard to be sure if Drury was running hard on the pitch, and the Reds' outfield did play the carom off the wall in the outfield perfectly. But with the #8 hitter coming up, I would have thought that Windmill Williams' would have been cranking his arms to send Drury round third. Instead, the D-backs ended up with men on second and third and, after an intentional walk to Nick Ahmed, Bradley grounded out, to strand the tying run on third-base.

The Diamondbacks bullpen didn't do their job either. Randall Delgado allowed a home-run to the first batter he faced in the sixth after Bradley left the game, making the score 4-2. And in the seventh, left-hander Zac Curtis came on to face a pair of left-handed batters... and promptly walked both of them. Silvino Bracho relieved Curtis, and did get a double-play, but then allowed a soft fly-ball that dropped in front of the advancing glacier in right field which was Tomas The Reds extended their lead with another run in the eighth. All told, the D-backs walked nine. the most in a game since April 7 - and they only needed eight innings to do it.

There was precious little in the way of offense either, as the team dropped their 16th game in the last 20. Arizona managed only five hits, two each off the bats of Segura and Tomas, and were hitless with runners in scoring position, going 0-for-16 with runners in scoring position. They also struck out a total of 12 times, Jake Lamb leading the way, going 0-for-3 with three strikeouts. In the past three games, Jake is 0-for-11 with seven strikeouts. Small sample size to be sure, but something to keep an eye on for the rest of the road-trip. 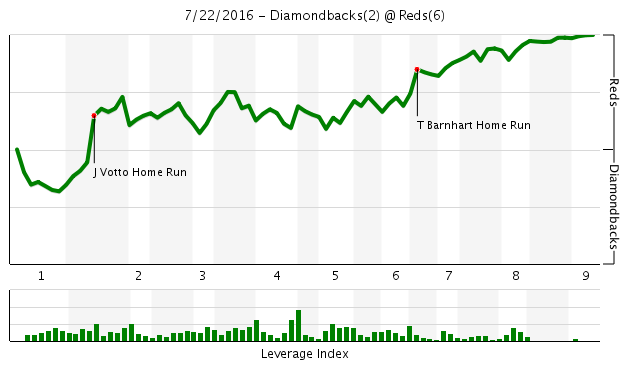 I retract my woohoo..

Yeah, if that's any kind of omen, this is going to be a lonnnnnnnngggggg road-trip. We'll hope for better tomorrow night - another 4:10pm first pitch, Arizona time - when Robbie Ray starts for the Diamondbacks.