If you had hopes things might be different for the Diamondbacks after the break, they died an unpleasant, brutal death at Chase Field this evening.

Share All sharing options for: Diamondbacks 7, Dodgers 13: Meet the new dross, same as the old dross

So I texted Turambar this afternoon: "You up for tonight or tomorrow?" He replied, "Tomorrow should work." That's a bit of a change, since Friday nights were usually Beercap Night. But, hey, it's all good: I'll get this one done, get it finished early and take the rest of the weekend off. What could possibly go wrong? Turns out either Turambar knew something, or simply dodged a bullet. Expectations of good things in the second half lasted approximately three batters into this game. Patrick Corbin had started strongly, fanning the first two batters he faced. Then Justin Turner homered into the camera-well in center field. It was largely downhill from there.

After a walk, Corbin rebounded to get another strikeout, fanning the Pig - always a pleasure - to end the inning, then had a clean, 1-2-3 second. But the shaky defense of Jake Lamb, probably the biggest question-mark over his otherwise excellent first-half performance, showed up with a vengeance in the second, as he made not one but two errors. Perhaps more disturbing, they were simple fielding errors, rather than the usual throws to first. That helped the Dodgers extend their lead to 2-0, and they had runners on second and third with one out, but Corbin did a good job of limiting the damaging, striking out AGon and the Pig to end the threat.

The Diamondbacks then struck back, unexpectedly. Patrick Corbin got things going with a single - say what you like about his pitching, he's batting .350 on the year. Nick Ahmed did the same, and one later, Michael Bourn drove them both in with a triple. Paul Goldschmidt got the ball to the right side of the infield, exchanging an out for a run, and the Diamondbacks had taken the lead. Now, all we needed was Corbin to deliver a shutdown inning, and we'd be right back in this one. Unfortunately, what we got was more of a shutoff inning; delivering the kind of frame which made even hardcore D-backs fans decide to see if there was anything new on Netflix.

It began single, single, two-RBI triple, and also contained another RBI single, two walks to load the bases and a two-run single by the Pig, who mercifully was thrown out trying to stretch that into a double. That ended Corbin's night, after another ugly outing. Just four innings for him tonight, his second-shortest outing of the season, and was charged with seven runs (six earned) on seven hits and three walks, with seven strikeouts. His season ERA is now a high for the year 5.25. His last four outings have been particularly ugly: his longest outing was 5.1 innings, and the combined line is 18.1 IP, 24 H, 23 R, 17 ER, 15 BB, 14 SO, 8.35 ERA.

With the D-backs now trailing 7-3, the white-flag bullpen was immediately brought into action, led by their commanding officer, Dominic Leone. He faced five batters, four of whom got hits. Fortunately, there was a double-play in the mix, but that was the only outs Leone recorded. He was bailed out by Edwin Escobar, who got the final out of the fifth, but then couldn't retire anyone in the sixth inning. Silvino Bracho came in with two on and nobody out, and almost escaped the jam. Key word: almost. Instead, it was a two-out grand-slam. Those three pitchers combined to allow five runs over their two innings of work, on nine hits.

In hindsight, Chip's lobbing in of the relief towel might have been a bit premature - especially with everyone being thoroughly well-rested and available. For the offense did their best to... Well, "get back into this," is probably a bit of a stretch, but would you accept, "keep things respectable"? A Lamb single drove Paul Goldschmidt home in the fifth, and a pair of home-runs from Jean Segura and Goldschmidt - the latter, a two-run shot - delivered loss-flavored tacos to the masses in the seventh, We had scored seven runs in seven innings against Los Angeles. If only we hadn't conceded a dozen...

Designated mopper Josh Collmenter worked a pair of scoreless innings, and also achieve a moral victory, stopping Chris Taylor from getting the cycle. Taylor's grand-slam off Bracho had put him a single away from the feat, and that was clearly his intention when he dropped a bunt down, but Collmenter looked nicely athletic in getting off the mound quickly toward third base, and getting the ball to Goldschmidt in time for the out. That came just after Collmenter had hit Scott Van Slyke - both benches had (inexplicably) been warned after Escobar plunked Turner, but Josh escaped ejection. Randall Delgado allowed a 13th and final run in the ninth.

Seven runs would, as Makakilo pointed out in the GDT, have been enough for the D-backs to win 65 of the first 90 games they played, so we can't really hang this defeat on the hitters. There were two hits apiece for Goldschmidt, Michael Bourn and Lamb. Chris Herrmann left the game after the sixth inning, grabbing his hamstring after the at-bat. That had been an issue for him before the break, so we'll see what happens. 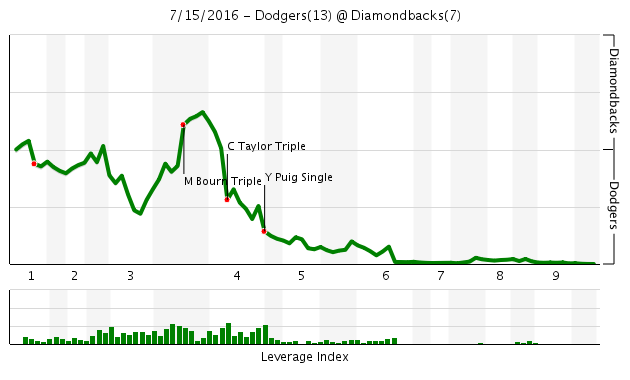 I will take suggestions in the comments as to precisely what kind of sex tonight's game was like. Whatever it was, the Diamondbacks appear to have forgotten their safe word. Tomorrow, it's a 5:10pm start, and an interesting storyline as Archie Bradley takes on former D-back, and TJ recoverer, Brandon McCarthy.