Maybe they should make it that, whoever wins the All-Star Game, that league's rules apply across baseball for the rest of the season. At least we'd get to use Tomas as a DH in the second half.

S'funny how uninterested I was in this All-Star Game for some reason. It makes a big difference when no-one on your team is starting, and you have to wait for them to get into the game, on the whim of a manager who goes to bed about the time most Diamondbacks' games start. It doesn't help that the Giants battery of Johnnie Cueto and St. Buster of the Flowers pretty much crapped the bed on this one. Cueto became the first All-Star pitcher since Roger Clemens in 2004 to allow multiple homers, being taken deep by a pair of Royals in the second inning. Anyone know what Posey's catcher's ERA is in his All-Star apperarances? I'm thinking it's something Shelby Miller-esque.

You'd think players from the team with the best record in the National League at the break, would have some kind of vested interest, but it appears not. Instead, Cueto took the loss for his 1.2 innings of work, becoming the third NL West pitcher to be tagged with an L since the last time the Senior Circuit won the game, in 2012. The American League ran their record to 16-3-1 over the last 20 years. The National League has been held to three runs or fewer in seven of the last night contests, but does still just hold the overall advantage in the Midsummer Classic having won 43 to the AL's 42, with a pair of ties.

Eric Hosmer was awarded MVP, homering in the second, then driving in the American League's fourth and final run in the bottom of the third. Jackie Bradley Jr and Daniel Murphy also picked up a couple of hits apiece. The last run was scored by the National League in the top of the fourth, and the only real moment of drama thereafter was when they loaded the bases in the top of the eighth. Former Diamondbacks reliever Will Harris struck out Aledmys Diaz to end the threat. He's clearly no Jake Lamb. Neither is Brandon Belt, who flied out to left as a pinch-hitter during that eighth inning.

Paul Goldschmidt went 0-fof-3, but did see 12 pitches - only Murphy saw more all night on the NL roster. He came in to replace Bryce Harper in the fifth inning - feels like there's some kind of moral equivalence to be drawn there - and flew out to right. He then took over from Anthony Rizzo at first base, flew out to center in the seventh and grounded into a fielder's choice, representing the tying run in the ninth. It was largely a forgettable night for all the NL West representatives; Nolan Arenado following Goldie up and hitting into a game-ending double-play. It was the first such All Star game-ending GIDP since Edgar Renteria off Mariano Rivera in 2000.

Random other stuff. The David Ortiz Farewell Tour got its inevitable nice moment when he came out of the game after being replaced by a pinch-runner in the third inning. He got a standing ovations from both fans and players, and there were hugs all round. The fifth inning saw the first challenge in All-Star Game history, after Murphy was initially called out on a ground-ball bobbled by Jose Altuve. If only the regular season reviews we have to endure were as quickly and efficiently carried out. 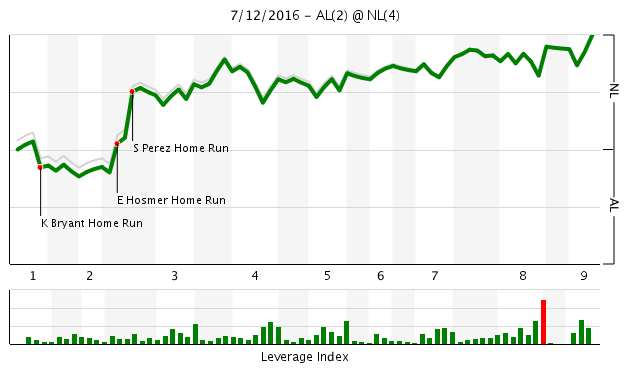 I had most comments in the Gameday Thread, which must be a first this season. However, I didn't even reach double figures, which I think goes to show how disinterested Diamondbacks' fans generally were in this. I suspect a few days off baseball is likely in everyone's best interests. Those present were: AzRattler, Clefo, Jim McLennan, JoeCB1991, MrMrrbi, Oldenschoole, david.munter and hotclaws. Comment of the ASG to Oldeschoole, after Diaz struck out with the bases loaded.

are the Diamondbacks of baseball leagues.

There are still two more baseball-less days before the Diamondbacks resume play on Friday against the Los Angeles Dodgers. Oh, and there was only one minor-league game played today in the US by our farm teams, so I'm not going to bother with a full recap. Double-A Mobile lost 2-1 to Mississippi. 3B Dawel Lugo had two of the BayBears six hits, including their only extra-base hit, a double that drove in a run in the seventh. Lugo was at third with no outs, representing the tying run, but Mobile couldn't bring him home. Taylor Clarke took the loss despite a quality start, allowing two runs over six innings, on six hits and no walks, with three strikeouts.