A team of superheroes, bravely battling against unsurmountable odds and an apparently unstoppable opponent to pull off an amazing victory? Not the plot of something from the Marvel Universe, just what happened this afternoon in Chicago.

Share All sharing options for: Diamondbacks 3, Cubs 2: Beercap of the Phoenix Comicon Weekend

The Diamondbacks' hitters struck out 18 times, which ties a record for the franchise in a regulation win, and is one off the National League record, set all the way back in 1969. You might remember the last time we did it - which, curiously, also ended in a 3-2 win for Arizona. The method was completely different, however. Jake Peavy was completely dominant over seven innings, fanning 16 Diamondbacks - but Stephen Drew knocked a two-run homer off Trevor Hoffman to give Arizona a walk-off victory. 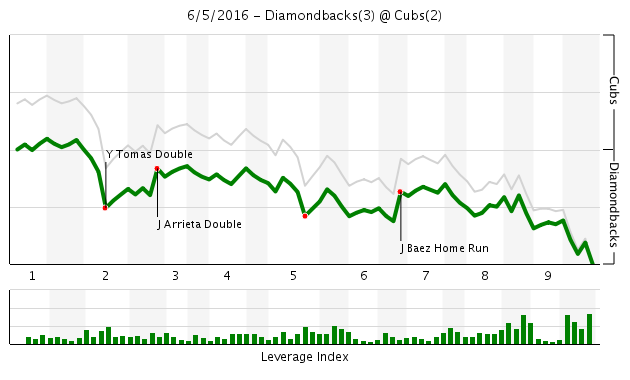 500 comments, but only 18 commentors - looks like many people (and I have to say, I'd include myself among them) had this one already written down in the scorebooks as a loss. Those keeping the faith, however, were: AzDbackfanInDc, GuruB, Jackwriter, Jim McLennan, JoeCB1991, Makakilo, MrMrrbi, Oldenschoole, Re Tired, SongBird, Xerostomia, coldblueAZ, hotclaws, noblevillain, nolanriley13, onedotfive, preston.salisbury and since_98. Comment of the thread goes to hotclaws.

Arrieta cannot get the win

Baseball is the greatest game ever invented. Ever. Say Amen.
- Ernie Banks

It's back home for the D-backs, after a 2-3 roadtrip that ended better than it began. A home-stand against both halves of Florida begins tomorrow night. Thankfully, we're back to reasonable start times, with a 6:40pm first pitch and Robbie Ray taking the mound for the D-backs.