For the first six innings, this was actually a game of baseball. Thereafter? Steadily less so.

We should have taken the hint from the baseball gods and just forfeited this one in the first inning. Having struck out the first two batters he faced, Archie Bradley then fanned Kris Bryant. Except, there was a cross-up with Welington Castillo behind the plate and he clanked the reception of the pitch, and dropped it. This somehow convinced home-plate umpire, Hunter 'Where is my service animal?' Wendelstedt, that Bryant had fouled the pitch off. Apparently, foul pitches are not a reviewable play, and so the at-bat continued - Bryant eventually doubled. Though Bradley escaped the inning without allowing a run, that was certainly ten extra pitches he had to throw, because of Wendelstedt's mistake.

That aside, Bradley was quite excellent - even with The K That Never Was, he still struck out a career-high number of batters for the second consecutive start, fanning 10 Cubs hitters. He was, as last time out, firing strikes: he had a first-pitch strike to 17 of the 24 batters he faced, and all told threw 72 of 112 pitches for strikes, pretty close to two out of three. Following up on Zack Greinke's shutout performance yesterday, it's the first time we've seen double-digit strikeouts from Diamondbacks pitchers on consecutive days, since Brandon Webb and Curt Schilling did it, all the way back on August 31 and September 1 in 2003 - so, more than twelve seasons.

Equally impressive was Bradley's ability to dial up ground-balls: there was only one fly-ball out all afternoon. There were a few more walks than last time - three, all told - but that's now four runs allowed over 13.1 innings of work since his return, a 2.70 ERA. I'm not certain about the specifics of the mechanical changes which were apparently made, but with nineteen strikeouts over those two starts, to four walks, I'm optimistic we're now seeing the real Archie Bradley. Of course, I'm still a little cautious, since he had a 1.45 ERA over his first three starts last year - but the peripherals there were a great deal less sustainable, with a K:BB ratio of 12:11.

The one run he allowed, really should have. He had two outs in the sixth and a runner on first, when Bryant launched a fly-ball slightly to the left of center. Chris Owings, starting in CF for the D-backs, got a horrible read on the ball, breaking in and to his right, only then realizing it was harder-hit than he thought. But by then it was too late to recover, and the ball was over his head for an RBI double to the ivy. Bradley regrouped, and got the final out of the inning, but if that had turned out to be the final margin of defeat, I would have been peeved. However, the Diamondbacks' management, defense and bullpen decided that would not be an issue, though only after Jake Barrett worked a scoreless seventh.

Indeed, it was only with two outs in the eighth that the team melted down: it looked like we had a chance to escape the image without damage, thanks to a Cubs TOOTBLAN. But it took the Diamondbacks seven attempts to get that pesky third out: by the time the inning came to an end, there had been two errors (Owings launching a relay throw into the dugout and outfielder Chris Herrmann clanking a fly-ball off his glove - Owings almost threw the ball away again on that play), two hit batters, a wild pitch, and two ill-advised intentional walks from Chip Hale - since both of those free passes were immediately followed by two-run doubles. The Cubs scored five, and this became an embarrassing smell of a contest.

The Diamondbacks had perhaps their best chance to score in the ninth, which doesn't say much, considering they had failed to muster any extra-base hits over the first eight innings. Paul Goldschmidt doubled to lead off the inning, but was stranded at third after getting there with one out, as Castillo and Owings both struck out. Beef did have two of the D-backs' six hits, and Chris Owings actually had the only two walks Arizona worked all afternoon. Only Goldschmidt and Jake Lamb now have more bases on balls than Owings this season, which is good to see, considering he was equal seventh there last season. But I think his defense this afternoon largely negated any plate discipline. 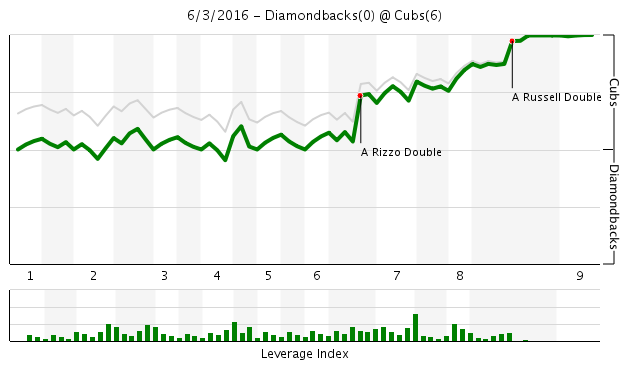 Just the one Sedona Red comment, which probably comes under the heading of "Nice sentiment, but..."

ok guys, score two runs in the 7th so we can get archie a win

With that game out of the way, things don't exactly get easier for the Diamondbacks, as tomorrow - another day game - they face Jake Arrietta. And when I say "not exactly easier," I mean that we'll be sending up Edwin Escobar, who didn't exactly do much to inspire confidence in his first outing.