Are the 2016 Arizona Diamondbacks the 2015 San Diego Padres?

The parallels are being increasing drawn between the two teams: how accurate are they?

Share All sharing options for: Are the 2016 Arizona Diamondbacks the 2015 San Diego Padres?

Before the 2015 season, the San Diego Padres aggressively overhauled the team. Some of the moves looked good, some ill-advised, but either way, the team made the decision to turn the page and push all its chips to the center of the table. The gamble failed; the team won 74 games -- even fewer than the year before -- and the organization has been in disarray since. Now, as the aphorism sometimes attributed to Mark Twain goes, history doesn't repeat, but it does rhyme. And you don't need a rhyming dictionary here to see a lot of last year's Padres in this year's Diamondbacks.
-- Dan Szymborski, ESPN

It's an easy comparison to make - but how accurate is it? If we peer beyond the obvious similarities, of mid-market teams trying (and thus far, it appears for Arizona, failing) to content, what do we see? And perhaps more importantly for the Diamondbacks, can we learn anything from how the Padres' front-office reacted to their failure?

This is the most obvious point of similarity, with both teams plunging into the free-agent pool with a splash, picking up one of the top names on the market in a bit to anchor their rotations. For the Padres: James Shields, who was inked to a four-year, $75 million deal. Over the previous four seasons, Shields had been very solid, with an ERA+ of 124 for the Rays and Royals; the Padres were looking for him to continue that trend in San Diego. But it hasn't happened: Over his 44 starts for them, Shields has an ERA+ of just 93, and the team are now actively shopping him to other teams: whether they'll get anything meaningful in exchange, remains to be seen.

The Diamondbacks made an even bigger splash, getting Zack Greinke for six years and over $200 million. The higher cost was understandable: Greinke had been stellar over three years for Los Angeles, with an ERA+ of 155 that trailed only team-mate Clayton Kershaw over that time (min. 300 IP). But the results so far for Arizona have been similar: an ERA+ of 91. Recently, Dave Cameron of Fangraphs suggested the team might make Greinke available in trade talks. That seems unlikely, after only one-third of a season, but if we continue to fall out of contention, it would make sense for Arizona to look at retooling, if not necessarily rebuilding.

The San Diego Padres opened their checkbooks wide for their run at contention, sharply increasing their salary bill on Opening Day by about 20% from $90.1 million in 2014, to a club record $108 million the following season. One significant different is, that hasn't been necessary for the Diamondbacks. Even as they took on board the largest contract - by about a factor of three - in franchise history, they actually reduced their payroll. The precise amount depends on exactly how you want to figure in things like Greinke's deferred salaries, but in terms of actual checks being written this year, you're not looking at much different from the 2015 figure of $91.5 million.

The Padres have pulled things back this year, courtesy of things like trading away Craig Kimbrel, and are back down to $99.3 million. For 2017, the Diamondbacks are looking at a moderate overall increase, given current personnel. They will have Brad Ziegler and Daniel Hudson coming off the books at the end of the season, as well as possibly Josh Collmenter's mutual option. But that and more will be eaten up in arbitration increases, with Jean Segura, Patrick Corbin, Rubby De La Rosa and Welington Castillo all hitting arb for the first time. Baseball-Reference.com currently pegs our 2017 payroll at around $108 million.

Trading, especially with the Braves

Both San Diego and Arizona saw significant action with Atlanta, the Braves being in full-on rebuild mode. Indeed, the Padres made not one but two major trades: in December 2014, they shipped a bunch of young players to Atlanta for Justin Upton. Then, right before Opening Day, they acquired Justin's brother, Melvin and Craig Kimbrel. But they also traded with the Dodgers (Matt Kemp), Athletics (Derek Norris), Rays (Wil Myers) and the Red Sox (Will Middlebrooks). The results were variable. While Justin Upton and Norris ended up their two best position players by bWAR, ahead of Yangervis Solarte (traded for in July 2014), Kemp was barely replacement value and Middlebrooks ranked worst, at -1.1 bWAR.

The D-backs big splash was the trade with the Braves for starting pitcher Shelby Miller, and even if neither Aaron Blair not Ender Inciarte have performed well in the majors, they've still been better/cheaper than Miller, and Dansby Swanson lurks as a future source of value. Outside of that, however, the D-backs were relatively restrained compared to the Padres. They swapped under-performing middle-infielders with Milwaukee, and a change of scenery seems to have helped both Aaron Hill and Jean Segura. Chris Herrmann has also been a nice pick-up. That was about it for Arizona, and through 1/3 of the year, three of the four Arizona players worth 1.5 bWAR are ones drafted here: Goldschmidt, Lamb and Owings.

Before the 2015 season, projections for the Padres were typically between 83 (Baseball Prospectus) and 88 (ESPN) wins. That's probably marginally higher than were expected by most neutral sources for the 2016 Diamondbacks on Opening Day: there were some estimates as high as 86 wins (USA Today), but as with the ZIPS 83.6 win forecast, that was before A.J. Pollock broke his elbow. On Opening Day, Clay Davenport had us at 82 wins, Bruce Bukiet 84 wins, and Accuscore 85.5 wins. However, almost one-third of ESPN's experts had us reaching the post-season this year; seven as division champions, three as wild-card entrants.

The reality, for both teams, was a large bucket of ice-cold water, poured decisively on their hopes and dreams, almost from Opening Day. San Diego's best was being tied for first place after 17 games. They were third by the end of April, and after mid-May were largely engaged in a tussle with the Diamondbacks for that and fourth-place - a battle eventually won by Arizona. The chart below plots the number of wins for each team over the course of the season; thus far, the Padres have been doing somewhat better, and had a winning record as late as June 8, when they were 30-29. The worst was definitely to come for them, going 10-21 after the end of August. 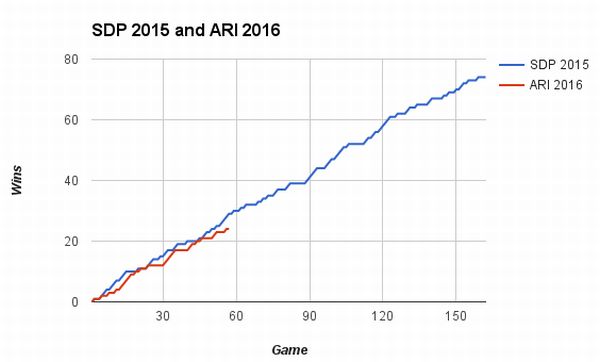 What the D-backs can learn

The Padres ended at 74 wins, a small improvement on the Diamondbacks' current pace. However, it's hard to say exactly what direction the team took in response to the changes. Some of the high-profile acquisitions have left the team: Craig Kimbrel was traded to the Red Sox, and Justin Upton left as a free-agent. But San Diego seemed unwilling to commit to a full rebuild, and are paying Shields, Kemp and Melvin Upton a total of over $58 million this year. Meanwhile, their farm system remains weak, despite getting some fresh blood in trade returns; Minor League Ball ranked it 23rd in April, barely changed from the previous year's position of #25. However, they will have six of the first 85 picks in this year's draft.

Certainly, the results have been even more lackluster. The Padres fired long-time manager Bud Black last June, 65 games in. But the permanent replacement, former D-backs' third-base coach Andy Green, has hardly galvanized the team into action, with the Padres on pace to be ten games or more worse than in 2015. The failure to compete, and subsequent further downturn in performance, have had a chilling effect on attendance at Petco. Crowds there are averaging three thousand less than at this point last season - and that's including a boost in season ticket sales, resulting from the All-Star Game being played there next month.

To me, it's commitment, something lacking in the D-backs pursuit of "contention" - it didn't make sense to lock away the check-book and plead poverty, after signing Greinke, With the team more or less out of it this season, they should take the remaining games to figure out what aspects are solid, what needs improvement, and how the latter can be done. If AZ ends up regressing significantly from 2015's mark, with Pollock's return to All-Star caliber uncertain, it may be necessary to admit the window of contention has closed, and go into full-on rebuild mode. Painful though that might be, it would still be preferable to the lingering zombie state in which the Padres find themselves, with no apparent plan going forward.