I'm fairly sure you want to read about his game, as much as I want to write about it.

This may be slightly less informative than your usual recap. I was at work for the first five innings, then the Phillies scored a couple of runs on my way home. After the first few minutes of the sixth inning, I made the decision to abandon the game and watch American Ninja Warrior instead, having entirely spaced on the fact that Clefo needed a pinch-hit recap this evening. Mind you, by all accounts, the decision to switch channels was an entirely wise one, as the seventh inning dragged on interminably. There were, basically no comments in the Gameday Thread after it, which indicates how much of a Debbie Downer the frame was.

It had been going pretty well too. Robbie Ray had looked very good through the front five innings. He did allow singles to the first two batters he faced in the top of the first, but after that, settled in, retiring 15 of the next 16 batters faced. Even more remarkable, his pitch counts through the end of the fifth proved remarkably manageable. He took 18 pitches in the first, then tightened up considerably, needing only nine, ten, twelve and sixteen the next four times up. If you're keeping score at home, that's 65 pitches through five scoreless innings of three-hit, which was certainly close to the best we'd seen of Ray this season.

But it didn't last. He left without retiring a batter in the seventh, having taken a further 37 pitches to record three more outs. While the sixth was a little problematic, as four singles and a wild pitch led to a pair of Phillies runs, it was nothing compared to the horror that was the seventh. It began with a single and RBI double that made the score 3-0 and knocked Ray from the game - a growing blister issue didn't help things. His final line was four runs on nine hits, but he walked none and struck out seven. There was an element of bad luck to Ray's stats, with a BABIP for the night of .450. Still, it was another non-quality start by a D-backs pitcher, and increased Ray's season ERA to 4.59.

Jake Barrett, about whom I had just been writing some very complimentary things in our mid-season review, made me a liar with likely his worst outing of the season. He faced seven batters, and retired only two, the others reaching on three hits and two walks. Four of them scored, as the Phillies pushed more men across home-plate that inning, as they had over the entire series in Philadelphia. That seventh pretty much felt like an entire series: the visitors sent 11 men to the plate, and three different Diamondbacks pitchers threw forty pitches. Josh Collmenter eventually got the third out, albeit after allowing both runners he inherited to score.

Collmenter took things the rest of the way, ending up with 2.1 scoreless innings on four hits, with a pair of strikeouts. So that's nice. However, you won't win many games giving up 16 hits, and the D-backs allowed 8 or more runs for the fourth consecutive game. The last time they did that? April 10-13, 2011, against the Reds and Cardinals, conceding 8, 8, 8 and 15. Remarkably, the D-backs actually split those four contests.

You'll notice I haven't said a word about the offense so far. That's because there was nothing worth reporting in that department. Arizona managed seven hits, all of them singles, and a pair of walks: they hardly threatened to score all night, going 0-for-3 with runners in scoring position. Their best chance probably came in the eighth, when they failed to convert a man on second with one out. Nick Ahmed, whose severely expectant wife is apparently better at holding on to things at home than the Diamondbacks, got a pair of hits, as did Paul Goldschmidt. It was the fourth time the D-backs have been shut out this season. 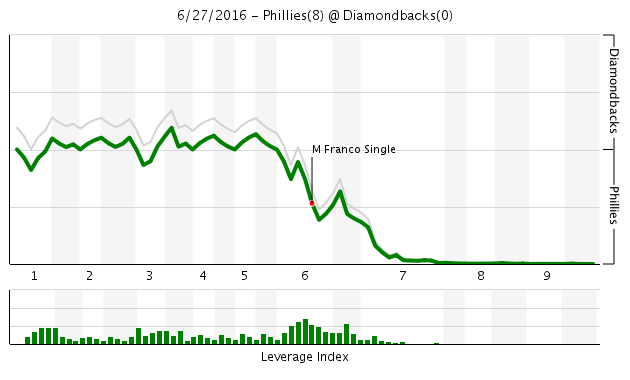 Unique set of WP scores here. All three pitchers and eleven hitters tonight for the D-backs were in an extremely narrow range, covered by just 7.5%. Not sure I remember a game were the best score for Arizona was so low. Maybe the near-perfecto Petit threw against us? As noted, enthusiasm evaporated in the GDT: MichaelMcD831993 led the way, ahead of SongBird and James Attwood, with others present being: AzRattler, Gilbertsportsfan, GuruB, I suppose I'm a Pessimist, Jackwriter, Jim McLennan, JoeCB1991, Majabe, Makakilo, MrMrrbi, Oldenschoole, Re Tired, Sprankton, Xerostomia, aldma, asteroid, coldblueAZ, david.munter, noblevillain, onedotfive and since_98.

Nothing more than one rec. I will be checking "Highly unsatisfied" on my customer survey concerning this game as well. Tomorrow should be better, simply because it can hardly get much worse, but also because we have Zack Greinke starting for us.