Unfortunately, the hits just kept on coming this afternoon.

"Physically, his stuff is good. He just had to get over some humps. Maybe it was coming over in the trade. He’s done a really good job of righting the ship."
-- Chip Hale, June 21

I'm wondering what the ship's name might be. The Lusitania? The Titanic? The S.S. Minnow? Because whatever craft Shelby Miller allegedly "righted," does not appear to have made the journey to Colorado. Hopes he could build on his start against the historically feeble Phillies offense, lasted...oh, two pitches, as Charlie Blackmon homered to tie the game up at one. The Rockies should have taken the lead in that inning, but for D.J. LeMahieu getting happy feet and running into a TOOTBLAN; he'd likely have scored on CarGo's subsequent double to the wall. Miller escaped further damage, and to his credit, pitched better in the second and third, allowing just an infield single.

But the fourth inning proved his undoing. This is my unsurprised face, because coming in. Miller had an ERA there of 10.38, with opposing hitters tattooing him at a raTe of .375/.419/.675. In fairness, he wasn't helped by his defenSe: Jean Segura was eaten up on a bad hop, and Welington Castillo could have nailed a runner at the plate, but left just enough of a gap beneath his glove for the Rockie to sneak his arm through. But conversely, four hits, including a pair of doubles, are never a good thing. And Miller then fell apart, allowing another run in the fifth and two more in the sixth. His final line: 11 hits and a walk in six innings, resulting in seven runs, all earned. He fanned five.

Of course, it would be just as unfair to come to a conclusion based on a single bad start - least of all in Coors - as it was to proclaim Miller in any way "fixed" after his outing against a Double-A line-up in Philadelphia. But the problem is, this outing was much in line with what we'd seen from Miller early in the season, with what seemed like a severe lack of swinging strikes. If it's a mental issue, It might have made sense to arrange the rotation so Miller's next start would also come against those Phillies. But instead, it's going to be against the Giants, who have been almost unstoppable, losing just once in their last 13 games at time of writing. That's an unenviable task.

The Diamondbacks offense got on the board quickly. Jean Segura walked, advanced on a fly-ball to the warning track from Michael Bourn, and came home on the inevitable Paul Goldschmidt hit. However, they then sat back while the Rockies scored seven unanswered runs. They certainly had their chances, most notably in the third inning, where singles by Nick Ahmed and Miller, then a walk to Segura loaded the bases, but Bourn hit into an inning-ending double-play. Another twin-killing, this one by Peter O'Brien extinguished another Diamondbacks threat in the fifth, with runners on the corners and out.

So, Arizona were 7-1 down, going into the seventh inning. But as we know, there's no such thing as a "safe lead" at Coors Field. Five outs later, we had the tying run in scoring position, and the go-ahead run on first.  In the sixth, Jean Segura led off with his fourth walk of the day. He'd never had a three-walk game before, never mind four. It also gave him 13 walks in June, the same number he had in the entire 2015 season. He stole second, and took third on an error, though Michael Bourn rendered the entire thing moot with a two-run homer to right, bringing the Diamondbacks to within grand-slam distance.

In the eighth, they got three more, all charged to our old friend, Chad Qualls. Jake Lamb had a PH RBI off the bench, Segura drove in another with a ground-out, and Bourn delivered his third run batted in of the day, with a double. The Rockies then opted to walk Paul Goldschmidt, and for once, the decision worked out, as Yasmany Tomas was unable to repeat his heroics from last night, grounding out. Arizona were now within one run, going to the bottom of the eighth. Unfortunately, it didn't  last. Josh Collmenter had no more success than Daniel Hudson on Friday or Saturday, and gave up four runs on four hits and two walks. We've allowed 11 runs in the eighth so far this series.

The top of the ninth was almost irrelevant. Peter O'Brien walked, only for Brandon Drury to line into another double-play, this one ending the game. In addition to Segura's four-pack of free passes, Welington Castillo had three hits for the Diamondbacks, Bourn and Nick Ahmed a pair, while Drury drew two walks, and Goldie reached base twice, on a walk and a hit. But this one falls squarely on the pitching: maybe if we had a fresh bullpen, we would not have seen Collmenter in the ninth, and we could have had another sterling comeback. But they probably needed the day off, and if this loss is the price for a win tomorrow, and an 8-2 road-trip, I'll happily take it. 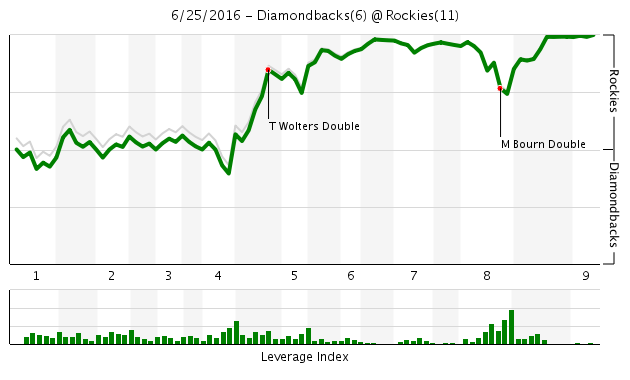 The road-trip and series finale is tomorrow afternoon, with another 1:10pm first pitch, Arizona time. Patrick Corbin starts for the D-backs, as they seek to clinch another road series win.